Dear Spotify,
I am a hedgehog and a regular listener when my human plays Spotify as she works. I would like to point out the bias in your new pet playlist feature. Why are there no playlists for hedgehogs? Hedgehogs rock, and it’s high time you overstuffed primates understood this.
Sincerely,
Snuggles Johnson

The streaming wars are tough. Spotify, Pandora, Apple Music, Google Play — the competition for listeners and their subscription dollars is fierce. While it’s a lucrative business, platforms are loathe to leave any money on the table. To differentiate itself from other services, Spotify has had good results with fun gimmicks, and now they’ve launched a good one: Pet Playlists. 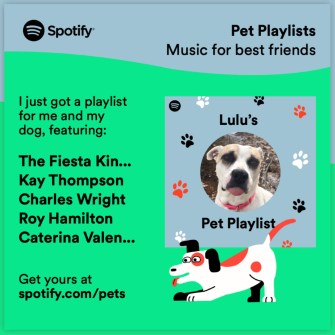 To build a playlist especially designed for your dog, cat, bird, hamster, or iguana — sorry hedgehogs — you’ll need a Spotify account. A free one works. Sign in, select the appropriate animal, answer a few questions about your pet’s personality, and Spotify will do the rest, creating a playlist for your pal that you yourself will also putatively enjoy.

We recruited Lulu, a relatively energetic, curious, human-and-dog-averse Dalmation/German Shepherd mix, and Spotify generated a playlist that seems to be half for her and half for the human associated with the account. This makes sense. No reason to make a pet happy and make its owner want to be let outside.

There doesn’t really seem to be much magic going on. One has to assume Spotify’s created song lists for the various animals and personalities which they then attempt to cross-match with their owners’ Spotify selections. This is not to say there hasn’t been some serious research done regarding animals and music. Music affects us to a mystifying degree, and wondering what it may do for animals makes obvious sense. 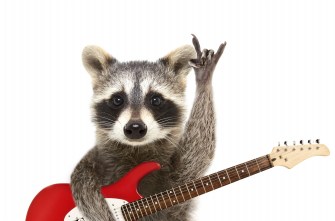 Charles Snowdon of University of Wisconsin-Madison has conducted extensive research to ascertain how they feel about it. He tells LiveScience, “We have a very human tendency to project onto our pets and assume that they will like what we like. People assume that if they like Mozart, their dog will like Mozart. If they like rock music, they say their dog prefers rock.”

Music, though, has a strange ability to touch us in ways other things don’t, on a deeply personal level, and this assumption, he’s found, is incorrect. He’s established that music’s effect on animals is species-specific, and seems to require sounds similar to those an animal has encountered in their environment. And this makes sense. Since we respond most readily to music within our vocal range and pitches we can hear — the auditory spheres in which we communicate — why wouldn’t that also be true of critters? Snowdon has published research regarding this, along with co-author Megan Savage, in Applied Animal Behavior Science.

Music for tamarins and cats

In 2009, Snowdon got together with cellist and composer David Teie to compose two songs for tamarins, based on the monkeys’ vocal pitch range about three octaves higher than ours. Their hearts rates are also double ours. To the human composers, the songs were unpleasant, but the tamarins did respond as expected.

The compositions were based on recordings of the simians. “Basically I took those elements and patterned them the way we do normally with music,” Teie told NPR. “You repeat them, take them up a [musical third] — you know, using the same kind of compositional techniques we use in human music.”

One song was a “ballad,” paced to match their heart rates. Says Teie, “This is a rhythm that approaches the resting heart rate of a tamarin and had this calming effect on them even though the pum-pum-pum in the background was maybe a bit faster than we would expect as humans for this music.” It reportedly chilled the primates right out. The other, faster song was intended to get them excited, and did get the tamarins worked up.

Since composing the tamarin tunes, Teie and Snowdon have moved on to cat music. They wrote three songs, “Cozmo’s Air, (above),” “Spook’s Ditty,” and “Rusty’s Ballad.” They tested them by playing the songs, along with two human compositions — Bach’s “Air on a G String” and Gabriel Fauré’s “Elegie” — for 47 cats. The humans reported that the felines showed a “significant preference for and interest in” for the songs written just for them.

Some other intriguing things about animals and music

Some animals have been seen as being soothed by music:

Apparently fish can identify the difference between the works of two different human composers, Bach and Stravinsky. So says a study published in the journal Behavioral Processes in 2013.

Bird brains are not unique in humans

Of course, they’re present in actual birds. Neuroscience and music researchers at Emory University found that the activity in birds’ brains in response to hearing music is similar to our own.

“We found that the same neural reward system is activated in female birds in the breeding state that are listening to male birdsong, and in people listening to music that they like. Scientists since the time of Darwin have wondered whether birdsong and music may serve similar purposes, or have the same evolutionary precursors. But most attempts to compare the two have focused on the qualities of the sound themselves, such as melody and rhythm.” — Sarah Earp, Emory University

Elephants may have a gift for music

It’s already known that some elephants are accomplished painters — this writer proudly displays an evocative elephant painting clearly of a big elephant and a small one by a mother who’d lost her calf — and it may well be that they enjoy playing instruments they can physically handle. The Thai Elephant Orchestra seen in the video above, live at the Thai Elephant Conservation Center in Lampang, Northern Thailand. They were organized by conservationist Richard Lair, and they play instruments specially rigged for their use, including gongs, steel drums and harmonicas.

For decades, cinemas have earned more from concessions than ticket sales. But can their current business model survive in the streaming age?
High Culture

A recent study reveals how nerve insulation becomes impaired in the brains of Alzheimer’s patients.
Up Next
Hard Science

Tardigrades have a fatal weakness after all

Not so indestructible after all.