Dr. Joel Smithers was recently sentenced to 40 years in prison for illegally prescribing more than 500,000 doses of opioids over the course of two years. According to law enforcement officials, every patient who visited Smithers’ practice in Martinsville, Virginia, left with an opioid prescription.

Martinsville stands out amidst the opioid epidemic. This town, whose population is only a little more than 13,000, has issued opioid prescriptions at a rate six times the national average, placing it among the highest in the nation.

Some patients would travel hundreds of miles to visit Smithers in order to acquire opioids from his practice. According to court documents, Smithers said that there were “a few patients from Virginia, but most of them, through word of mouth, would come from Kentucky and West Virginia. Those were the main two places.”

One man who testified during Smithers’ trial said he would drive between eight and 10 hours from Kentucky to Martinsville to get oxycodone and hydrocodone after a local doctor refused to prescribe him. “There wasn’t — there wasn’t no doctors in my area like that to see,” said the man.

Notably, Smithers did not accept insurance, and instead collected, in all, more than $700,000 in cash and credit card payments.

“This defendant not only violated his Hippocratic Oath to his patients, but he perpetuated, on a massive scale, the vicious cycle of addiction, despair, and destruction,” said attorney Thomas Cullen in a statement. “We have no higher priority than investigating drug-dealing physicians and other corrupt health-care practitioners and putting them in federal prison.”

Some estimates have put the number of Americans addicted to opioids at between five and 10 million, though the official government estimate is 2.5 million. As a result of this epidemic, more than 300,000 Americans have died. Researchers at the CDC have discovered that the lethality of the opioid epidemic has even reversed Americans’ typically upward-trending life expectancy. The last time that life expectancy dipped this significantly? World War I. 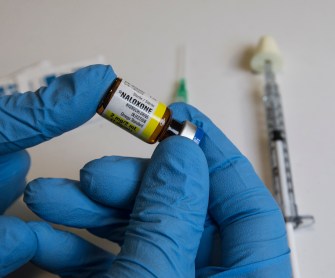 We typically conceive of opioid addicts as buying illegal drugs such as heroin from a dealer in an alley, but the reality is that most addicts are getting their vice through legal channels, such as was the case with Smithers. According to a report by the Substance Abuse and Mental Health Services Administration, less than 5 percent of users get their opioids from a drug dealer, while nearly a quarter got their opioids from a single doctor.

While the opioid epidemic would not be possible without the contribution of unethical doctors, the role of pharmaceutical companies cannot be ignored either. Purdue Pharma, for instance, spent years misleading doctors on the dangers of their flagship product, OxyContin. Richard Sackler, then-president of the company, wrote in a 2001 email that, “We have to hammer on abusers in every way possible.” Doing so would shift the blame from pharmaceutical companies’ unethical behavior to drug user’s moral failings. “They are the culprits of the problem,” wrote Sackler. “They are reckless criminals.”

After being sued for more than $10 billion in damages, Purdue Pharma recently filed for bankruptcy.

Pharma representatives’ jobs are to convince doctors to prescribe their products, and while this can take the form of disinformation, often pharmaceutical companies convince doctors through speaking opportunities, conferences, trips, and free meals. One often-cited study found a significant correlation between pharmaceutical spending of this kind and how frequently doctors prescribed opioids. Specifically, taking doctors out for meals was the biggest predictor of whether that doctor would write more opioid prescriptions.

Regulating such behavior and revising drug policy has become a focus in the 2020 election as well. The candidates’ strategies for handling the opioid epidemic vary significantly, but for the most part, they target much-needed changes to drug treatment policy, such as increasing the availability of naloxone, which reverses opioid overdoses; prioritizing treatment over incarceration for addicts; regulating when doctors can prescribe painkillers; and other policy changes.

There are a lot of parties that bear responsibility in developing the opioid crisis, including doctors like Smithers. Fortunately, there is reason to be optimistic. Provisional data from the CDC shows that the reported number of opioid deaths from 2018 to 2019 have decreased by 3.9 percent. While it’s a small figure, hopefully it’s the beginning of a long-term reversal in the opioid epidemic.

Detective fiction reveals how a particular society or time period looks at crime and criminal justice.
The Past

Technology designed to listen for atomic bombs can also hear tornadoes.
Up Next
Neuropsych

How to deal when things fall apart

Glenn Albrecht has ideas about how to cope with the effects of a changing world: Invent a new language.