It seems that every major scientific or technological advancement is immediately labeled “dangerous” by critics. The printing press was going to destroy our memory. Pasteur’s groundbreaking work was followed by an anti-vaccine movement. Radio was going to destroy society; then it was television; then, the internet. Pushback against progress appears inevitable.

Of course, technology is usually morally indifferent. Smartphones can be used to video call your grandparents or order illegal drugs. How we use technology is what matters.

According to co-author Anthony Chemero, the idea that smartphones and digital technology damage our biological cognitive abilities is not backed up by science. Instead, he claims that we are developing different relationships to cognition due to smart devices. “What smartphones and digital technology seem to do instead is to change the ways in which we engage our biological cognitive abilities.”

The team cites research that found that using digital technology as an external memory system doesn’t take into account the fact that short-term effects do not necessarily indicate long-term changes to cognitive functioning. They write, “Relying on external tools when they are available is not the same as losing the ability to engage internal processes when necessary.”

Other research disagrees with that conclusion. The famous London cab driver study showed that cabbies had larger hippocampi and better memory than non-drivers. Other research shows that GPS reduces spatial awareness and mental mapping. Studies such as these indicate that — as the cliché goes — if you don’t use it, you lose it. 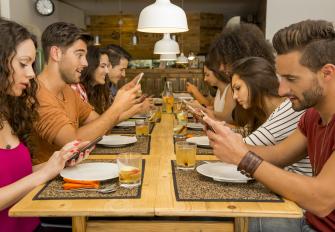 Still, the authors are correct that fear about the dangers of technology is overblown. Technology generally makes life better. In particular, the team considered five ways in which smart technologies are especially useful:

While the team ably counters the fear-mongering around the “dumbing down” of humanity through technology, they also seem a bit too enthusiastic about championing its advancements. Chemero concludes:

“You put all this technology together with a naked human brain and you get something that’s smarter…and the result is that we, supplemented by our technology, are actually capable of accomplishing much more complex tasks than we could with our un-supplemented biological abilities.”

That is certainly true, to a degree. But we should also be aware that every benefit comes with a cost.

Here’s another thing to consider: what happens if your smartphone or the internet stops working?

Expressing gratitude encourages others to continue being generous, promoting a cycle of goodness.
Up Next
Life

How evolution shifts from unicellular to multicellular life

When facing a predator, single cells sometimes unite to defend themselves, paving the way for more complex multicellular life forms to evolve.