Picture yourself holding your breath. How long can you last underwater? A minute? Two? You probably imagined yourself sitting a foot or so beneath the surface of a pool during this exercise, but consider how long you can hold your breath actively swimming as deep below the surface of the ocean as you can go. This would probably look like maybe 30 seconds of swimming down followed by a rush to the surface. The Bajau people of the Philippines, though, according to reports, could quite confidently imagine swimming 200 feet below the ocean surface for up to 13 minutes.

These abilities aren’t merely the result of dedicated training. The Bajau people have lived their lives at sea for generations, so much so that they’ve developed special adaptations to their oceanic lifestyle. 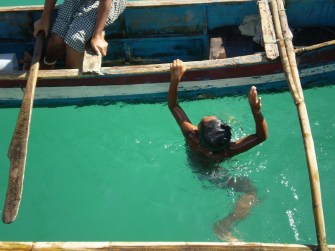 Uniquely adapted to a unique life

The traditional Bajau lifestyle is mainly spent on boats organized into flotillas that meander around the waters of the Philippines, Malaysia, and Indonesia. Here, they engage in subsistence hunting, spearing fish for food when the need arises. In a given day, a Bajau individual might spend five hours underwater in total, where they are complete masters of their environment. The only equipment they use are handcrafted wooden goggles and a speargun.

In order to facilitate their freediving lifestyle, some Bajau deliberately puncture their eardrums to deal with the intense pressure they experience underwater. “You bleed from your ears and nose, and you have to spend a week lying down because of the dizziness,” said Imran Lahassan, a Bajau man, to The Guardian. “After that you can dive without pain.” Bajau who undergo this procedure tend to become hard of hearing in their old age.

Simply diving frequently also helps them become more capable swimmers. The lung wall and abdomen become more compliant, and diaphragms become stretchier. But researchers have discovered that the Bajau also possess a useful genetic trait. Specifically, the Bajau possess variants of the PDE10A gene and the BDKRB2 gene, variants that are absent from their closest neighbors, the Saluan, who do not live their lives at sea.

This change manifests itself in a few ways. For one, Bajau have spleens that are 50 percent larger than the Saluan. Spleens aren’t necessary for survival, but they do play a role in the immune system and act as a kind of filter for the blood, removing old red blood cells and recycling iron. But crucially, the spleen holds a reserve of blood. When mammals dive underwater, the spleen contracts, distributing the reserved, oxygen-rich blood throughout the body. So, a bigger spleen means more available oxygen when diving.

Furthermore, the genetic variants that the Bajau possess is associated with another feature of the diving response: peripheral vasoconstriction, although this phenomenon hasn’t been directly observed by researchers. The unique genetic profile of the Bajau may enable them to better constrict noncritical areas of their vascular system. In essence, this means that less blood is used in the more external parts of their bodies such as their limbs, and more blood is sent to critical areas like the heart, lungs, and brain, enabling longer dives. 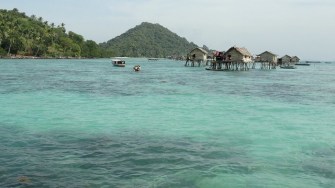 A way of life at risk

Unfortunately, the nomadic lifestyle of the Bajau people has been dying out for years. Many factors are working against them. First, nomadism itself isn’t compatible with modern states, and many Bajau have been made to settle on land or in stilt villages built on shallow seas. What’s more, some Bajau engage in fishing practices that directly harm the environments they rely on. Some divers crush up potassium cyanide tablets into plastic bottles full of seawater, which can then be squirted at fish to stun them for an easy catch. The practice easily damages sensitive coral reefs that form the environment for many of the fish species they rely on for food. Industrial fishing, too, is depleting the fish stocks they used to survive. Altogether, the changing world is quickly erasing the Bajau way of life.

Ancient humans may have evolved to slumber efficiently — and in a crowd.
Up Next
Hard Science

An innovation may lead to lifelike evolving machines.