In October 2017, a massive cloud of nuclear radiation floated over Europe, releasing into the atmosphere between 30 and 100 times more radiation than that of the Fukushima accident in Japan in 2011. The source of the leak has remained a mystery, as no nation or organization has yet claimed responsibility. Now, a new study claims to have traced the source of the leak to the Mayak nuclear facility in southern Russia.

The nuclear leak was first recorded on October 2, 2017, when a team of Italian scientists recorded unusually high levels of a radioactive isotope called ruthenium-106 over Milan. Hours later, scientists in the Czech Republic, Austria, Norway, and, soon after, five other countries issued alerts after detecting high levels of ruthenium-106. It soon became clear that a nuclear accident had occurred somewhere in Eurasia — analyses of the ruthenium-106 suggested it was released “at an advanced stage in the reprocessing of nuclear fuel,” says the new study. This claim was supported by the fact that ruthenium-106 was the only radioactive substance recorded.

Fortunately, the radiation wasn’t dangerous to humans. The Institute for Radiological Protection and Nuclear Safety wrote in 2017 that the “concentration levels of ruthenium-106 in the air that have been recorded in Europe and especially in France are of no consequence for human health and for the environment,” but it added that conditions could be dangerous close to the accident site.

The question was: where’s that?

Based on weather patterns, an early culprit was Russia’s Mayak nuclear complex, the site of the notorious 1957 Kyshtym nuclear disaster. But Russian officials denied an accident at Mayak, suggesting instead that the radiation came from a satellite whose radionuclide battery had burned up upon reentering the atmosphere. This “satellite hypothesis” fell flat after no space organization reported losing any satellites. The source of the leak was never determined.

The new study — published in Proceedings of the National Academy of Sciences — aims to close the case. Using more than 1,300 measurements from 176 measuring stations in 29 countries, scientists traced the source of the accident to the southern Urals region of Russia, where lies the Mayak nuclear complex.

“According to detection time series, a back-trajectory analysis, and chemical considerations, the Mayak nuclear complex in southern Urals should be considered as a likely candidate for the release,” the study concludes. 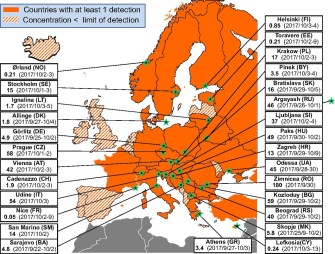 This figure shows the countries in Europe that detected ruthenium-106.

The study also notes how European countries have established a monitoring network designed to detect radionuclides, due in part to concerns resulting from the 1986 Chernobyl disaster.

“Today most of these European networks are connected to each other via the informal ‘Ring of Five’ (Ro5) platform for the purpose of rapid exchange of expert information on a laboratory level about airborne radionuclides detected at trace levels,” it says. “In October 2017, an unprecedented release of ruthenium-106 into the atmosphere was the subject of numerous detections and exchanges within the Ro5.”

“We maintain that there have been no reportable events at any Rosatom-operated plants or facilities,” Rosatom said. “Both the national regulator and experts from an independent international inquiry inspected the Mayak facility back in 2017 and found nothing to suggest that the ruthenium-106 isotope originated from this site, nor found any traces of an alleged accident, nor found any evidence of local staff exposure to elevated levels of radioactivity.”

EV charging stations are the most widespread alternative to gas and diesel pumps. Each alternative has its own hotspots and “deserts.”
Health

Explore the key highlights from the UN’s latest release of its world population estimates.
The Present

Deliveries of the $250k Lightyear 0 will start in November 2022.
The Future

Is the Salton Sea hiding enough lithium to power America?

A team of scientists hopes deep-earth lithium could sustain America’s vast demand for batteries. But extracting it won’t be easy.
Up Next
Hard Science

Quantum Darwinism, which may explain our reality, passes tests

A mind-bending physics theory may explain why we have one reality instead of many.