We have about 12 years left to save the world. The IPCC report making that dire prediction was published earlier this month. Immediately, normal life around the world ground to a halt, while literally everybody everywhere tried to figure out how to help prevent the apocalypse.

Just kidding. The report caused precious little alarm and precipitated none of the large-scale actions that are needed to alter the course of events. 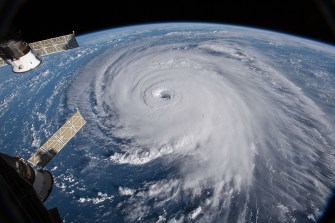 As the latest installment in climatological apocalyptica—a genre so dystopian that some still insist it should be classified as fiction rather than fact—the report merely added to the long list of dismal dispatches from the front line of our losing war with the future. A sample of previous, similar bad tidings: 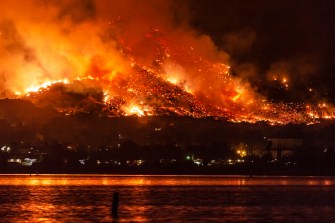 The so-called Holy Fire at Elsinore Lake in California, September 2018.

The frog in the pot

Humanity is the proverbial frog in the pot. Had the water been this hot to start with, we’d have jumped out straightaway. But since it’s heating up gradually, we’ll boil to death before we save ourselves.

And by now, the challenge seems so monumental that few see the point in doing something. That feeling was succinctly put by SNL’s Michael Che on a recent Weekend Update:

“I just keep asking myself: Why don’t I care about this? I mean, don’t get me wrong, I 100% believe in climate change. Yet I’m willing to do absolutely nothing about it.”

“People only care about some things. Like, if Fox News reported that in 2030 climate change is going to take away all the flags and Confederate statues, there’d be recycling bins outside of every Cracker Barrel and Dick’s Sporting Goods.”

A flippant point, but the grain of truth is that because of its size and pace, the process of environmental degradation seems hopelessly irreversible. How much easier and more comfortable to turn away from incurable despair and ignore the impending end of the world. 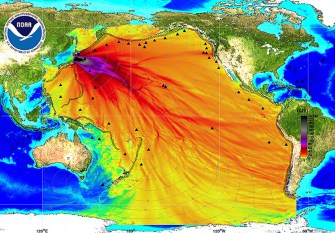 The NOAA map as it appears on some alarmist websites. Note the absence of a map legend.

That’s what this map reminded me of. The Fukushima nuclear accident was a thoroughly depressing coda to the devastating earthquake and tsunami that hit Japan on 11 March 2011. So much so that we don’t like to be reminded of it.

Even if, or precisely because, leakage of radioactive material has polluted the Pacific Ocean, all the way down to Antarctica. As this map suggests, we’ve lost the greatest body of water to radioactive pollution—a loss too great to contemplate.

The map surfaced in 2013, when Japan’s Nuclear Regulatory Authority (NRA) warned that highly radioactive water from the destroyed nuclear plant at Fukushima was seeping into the Pacific Ocean, creating an emergency that operator Tepco seemed unable to contain.

Color-coded to reflect various levels of radiation, the map shows radioactivity from Fukushima leaking into the ocean, contaminating the furthest corners of the Pacific; a poisonous purple flame projects eastward from Japan’s Pacific coast, fanning out into radiant red, ohmygod orange and worrisome shades of yellow and green.

Australia’s Barrier Reef seems to be doing a good job of keeping the worst contamination away from that country’s shores. The Sea of Cortez, between the Baja California peninsula and the Mexican mainland, is still blue. But the contaminated water has touched all other shores lapped by the Pacific, from Alaska all the way down to Chile and the Antarctic.

Full map, with legend specifying the nature of the data: wave amplitudes from the tsunami.

The map suggests that the world’s largest ocean has been lost to radiation and should now be approached with as much suspicion as the exclusion zone around Chernobyl.

Except that that’s not what this map shows. It’s a Snopes-certified hoax. And therein lies this map’s redeeming power. Rather than having been unspeakably catastrophic, Fukushima is not the omerta-inducing disaster you might think it is.

The map, developed by the National Oceanographic and Atmospheric Administration (NOAA), does relate to the devastation of March 2011. But it plots tsunami wave height, not radiation leakage levels. Check the date on the map: 2011, the year of the tsunami itself. Not 2013, when Japan’s NRA launched its warning about the leakage.

Fukushima is not ‘over’. But the problem is on a different scale than the one suggested by this map, and other alarmist misrepresentations that we’re sometimes too eager to believe. 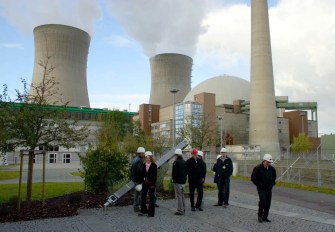 Nuclear plant at Grafenrheinfeld in Germany.

As dark clouds go, Fukushima is fairly manageable. It even has a sliver lining or two.

Fukushima is the only other nuclear disaster next to Chernobyl to get a Level 7 classification on the International Nuclear Event Scale. Yet estimates of radioactivity released at Fukushima range from just 10-40% compared to Chernobyl. The highly contaminated zone was 10-12% the size of the zone in Chernobyl. 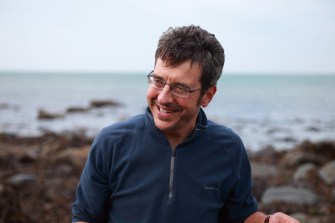 Few have gone quite so far as George Monbiot, the environmental activist and writer, who wrote in 2011: “As a result of the disaster at Fukushima, I am no longer nuclear-neutral. I now support the technology.”

“A crappy old plant with inadequate safety features was hit by a monster earthquake and a vast tsunami. The electricity supply failed, knocking out the cooling system. The reactors began to explode and melt down. The disaster exposed a familiar legacy of poor design and corner-cutting. Yet, as far as we know, no one has yet received a lethal dose of radiation (1).”

“I’m not proposing complacency here. I am proposing perspective. Like most greens, I favor a major expansion of renewables. But the energy source to which most economies will revert if they shut down their nuclear plants is not wood, water, wind or sun, but fossil fuel.”

“Atomic energy has just been subjected to one of the harshest of possible tests, and the impact on people and the planet has been small. The crisis at Fukushima has converted me to the cause of nuclear power.”

Controversial? Certainly. Enlightened or misguided? That remains to be seen. But Monbiot shows—as does this map—that even world-class disasters can inspire optimism rather than despair.

(1) Obviously written before news of the casualty mentioned above was publicized.

To preserve biodiversity and ecosystems, protected areas should be connected into a gigantic World Park.
The Present

Trees store carbon dioxide, have a cooling effect in cities, and reduce flood risks.
Up Next
Health

Delivered together, the two join forces to eradicate drug-resistant bacteria.