President Donald Trump said he’s sending Secretary of State Mike Pompeo to meet with Saudi King Salman to discuss the disappearance of Saudi journalist Jamal Khashoggi. Turkish officials and others have alleged that Khashoggi, who sometimes criticized his government in columns for the Washington Post, was killed after he entered the Saudi consulate in Istanbul, Turkey, on October 2.

“Just spoke to the King of Saudi Arabia who denies any knowledge of whatever may have happened “to our Saudi Arabian citizen.” He said that they are working closely with Turkey to find answer. I am immediately sending our Secretary of State to meet with King!” 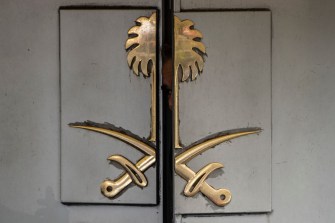 An official looks from inside the Saudi Arabia’s consulate in Istanbul, on October 12, 2018. – A Saudi delegation has arrived in Turkey for talks on missing journalist Jamal Khashoggi, officials said on October 12, with Riyadh and Ankara sharply at odds over how he disappeared last week from the kingdom’s Istanbul consulate.

The Saudi government, which is effectively ruled by the king’s son, Crown Prince Mohammed bin Salman, has been facing mounting pressure from Western nations—the U.S., Germany, France and the U.K—to answer for the strange disappearance.

“As the President has conveyed, the United States is concerned by his disappearance,” Pompeo said in a statement last week. “State Department senior officials have spoken with the Kingdom of Saudi Arabia through diplomatic channels about this matter…We call on the government of Saudi Arabia to support a thorough investigation of Mr. Khashoggi’s disappearance and to be transparent about the results of that investigation.”

On Friday, a Saudi official announced the opening of an internal investigation into the case. But Turkish officials have accused the Saudi government of failing to cooperate with ongoing investigations, which include attempts to search the house of the consul general.

“We wanted to come in with all the chemicals and equipment investigators use to inspect crime scenes,” a Turkish official said. “The Saudis said we could only get a brief tour.”

Turkish officials, speaking anonymously, also claimed to have evidence showing Khashoggi was killed and dismembered by a team of 15 operatives dispatched from the Saudi capital Riyadh. 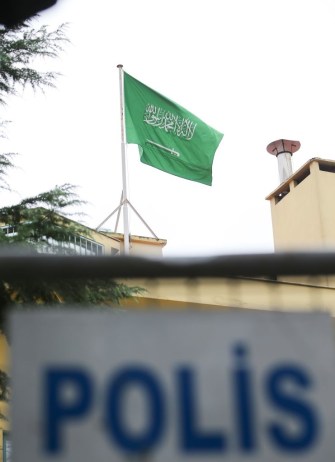 ISTANBUL, TURKEY – OCTOBER 15: Flag of Saudi Arabia is seen at Saudi consulate as the waiting continues on the disappearance of Prominent Saudi journalist Jamal Khashoggi in the Consulate General of Saudi Arabia in Istanbul, Turkey on October 15, 2018. Khashoggi, a journalist and columnist for The Washington Post, has been missing since he entered the Saudi consulate in Istanbul on Oct. 2.

Meanwhile, the Saudi economy has been taking blows. Facing the possibility of retaliatory U.S. sanctions, many Saudi stocks have plunged over the past two weeks, and some international businesses are placing deals on hold. Richard Branson, the billionaire founder of Virgin Galactic, had hoped to collaborate with the Saudi government to boost tourism in the region, and to accept a $1 billion investment into space tourism ventures, but said on Thursday that he might need to cancel those deals if the government had a hand in Khashoggi’s death.

“What has reportedly happened in Turkey … if proved true, would clearly change the ability of any of us in the West to do business with the Saudi government,” Branson said in a statement.

Crown Prince Mohammed bin Salman has been accused by multiple sources of using violence to silence critics and dissidents. Khaled bin Farhan al-Saud, a Saudi prince living in exile in Germany, told The Independentthat several Saudi officials have disappeared in recent weeks after speaking out about the Khashoggi case.

“Over 30 times the Saudi authorities have told me to meet them in the Saudi embassy but I have refused every time. I know what can happen if I go into the embassy,” he said, adding, “Around 10 days before Jamal went missing they asked my family to bring me to Cairo to give me a cheque. I refused.”

In an interview with CBS’ 60 Minutes on Sunday, Trump promised “severe punishment” if it’s shown the Saudi royals played a part in Khashoggi’s disappearance.

“There’s something really terrible and disgusting about that, if that was the case, so we’re going to have to see,” Trump said. “We’re going to get to the bottom of it and there will be severe punishment.”

He also suggested on Monday that perhaps “rogue killers” could have been responsible for the journalist’s disappearance, but added “who knows.” Without hard evidence showing the Saudis killed Khashoggi, or evidence proving the journalist is even dead, it’s unclear how Pompeo will handle the meeting with the royals.

Unstable politics and virtue signaling are responsible for creating bureaucratic nightmares.
Up Next
Health

We talk a lot about what to eat, but what about when?