For decades, burgers and hotdogs have been hailed as the national symbols of the American diet. But as alarm over the climate catastrophe skyrockets and new research shows that switching over to a vegan-based diet can drastically cut CO2 emissions, our love affair with meat might be coming to an end.

What the Research Says

There have already been some pretty sobering studies on the negative impacts of a carnivorous diet on both the human body and the planet, but for whatever reason Americans seem to struggle with actually swapping out steak for tofu. The amount of meat that American and British citizens consume has actually risen by 10 percent since 1970, according to data from the UN’s Food and Agriculture Organization.

But what if that could drastically curb climate change?

This week, research published by scientists at Oxford University made some shocking estimates regarding both the environmental and medical concerns of eating extra servings of certain types of food. One sobering finding related to health was that by eating an additional 50 grams of processed red meat (about two slices of ham) per day as compared to a person who eats the typical Western diet outlined in the paper, you elevate your chances of dying within the year by an alarming 41 percent. Yet, this pales in comparison to the environmental impact of eating meat.

A 50 gram portion of red meat is linked to at least 20 times more greenhouse-gas emissions and 100 times the land use as a 100g portion of vegetables, which is considered the standard serving size. “Averaged across all the ecological indicators the authors used, red meat was about 35 times as damaging as a bowl of greens,” reports the Economist. 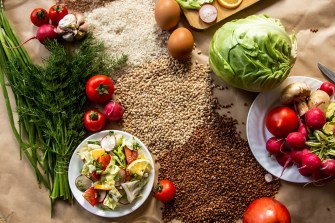 In another study conducted earlier this year, researchers at John Hopkins University along with other institutions simulated the ecological impacts of certain dietary substitutions. They too found that sacrificing meat makes an enormous impact.

The Economist reports that compared with an American who consumes 2,300 calories of a typical combination of foods, a vegetarian slices 30 percent off of their annual green-house gas emissions by diet alone. Reducing dairy makes a big difference, too. If you can’t bring yourself to go totally vegetarian for the planet, consider cutting out milk and cheese. After all, cows contribute 40 percent of the annual methane produced per year.

Obviously, the most ecologically clean diet is total plant-based veganism. Adherents to that diet cut down their carbon footprint by a whopping 85 percent. But you don’t have to put a ring on veganism to radically lower carbon emissions through your diet. Going vegan for just two-thirds of meals while still occasionally indulging in animal products would cut food-related greenhouse-gas emissions by almost 60 percent.

Food of the Future

Diet has played a fundamental role in the disastrous unsustainability of modern life. It’s today’s younger generations who are left with the catastrophic eruption of what humans have been doing to the Earth for the last few centuries. As we watch the Amazon burn, the arctic melt, and whole species get wiped out, it’s no surprise that most American teens are anxious about climate change with around a quarter taking action.

So it’s also not shocking that the biggest threat to the meat industry is younger millennials who are adopting a more vegan, plant-based diet. As veganism goes more mainstream and we witness the livestock industry crumble, it’s looking like we’re in the midst of a diet revolution.

In addition to vegan diets, this includes new technology radically changing the way we access nutrients. For example, today tools such as precision fermentation allow us to program and access the specific sources of the nutrients we need independent of the macro-organisms we have historically eaten, like cows or chickens, to get those nutrients. By going molecular we are arriving at a more sustainable means of feeding the human race and a cleaner way of delivering those nutrients untainted by toxic additives such as chemicals or insecticides. The think tank RethinkX, predicts a rapid acceptance of these “modern foods” that will leave the cattle industry effectively bankrupt by the year 2030.

Given these recent studies and the accelerating panic over rising CO2 levels and ecological destruction, it isn’t far fetched to think that future generations will continue their shift away from animal sources of food over to more molecular and plant-based, vegan diets.

Tags
biotechclimate changeenvironmenthealthsustainability
In this article
biotechclimate changeenvironmenthealthsustainability
Related
Life
Strange life forms create an “alien” ecosystem in an abandoned uranium mine
Slimy biofilms made up of bacterial and eukaryotic life forms have taken over an abandoned, flooded uranium mine in Germany.
The Present
Climate change is altering the chemistry of wine
Smoke taint from wildfires is gross, even to wine amateurs.
Neuropsych
Asthma drug brings back “lost” memories
In a study involving mice, scientists used two different techniques — one optogenetic and one pharmacologic — to recover “lost” memories.
Life
Our antidepressant drugs are affecting animals and ecosystems
A toxicologist explains the impacts of antidepressants on fish — and no, they’re not getting any happier.
Life
Scientists use CRISPR to insert an alligator gene into a catfish
Disease kills off 40% of farmed catfish. This gene protects them.
Up Next
The Present
Billions of fake accounts: Who’s messaging you on Facebook?
The social media company’s recent transparency report claimed that it had taken down a staggering number of fake accounts — but it’s unlikely they’re catching them all.