The 20th century saw the greatest population surge in human history, rising globally from 1.6 billion in 1900 to 6 billion in 2000. That trend is over. The majority of demographic data suggest that, despite previous concerns about overpopulation crises, the bigger problem for most parts of the planet will be too few babies.

Data clearly reflects this phenomenon. In Japan, people buy more diapers for the elderly than babies. China, which long enforced a one-child policy, recently raised its child limit to three; the nation expects its population to peak and then decline in 2030. And the population growth rate in the U.S. is at historic lows, reminiscent of the Great Depression era.

A new study published in npj Urban Sustainability explores the future of underpopulation and how it’s likely to affect sustainability goals. Using demographic data from United Nations reports, the study argues that the underpopulation problem is dynamic and twofold: Populations are simultaneously shrinking and ageing.

These changes won’t spread evenly across the globe. By 2050, the regions set to see the biggest increases in elderly populations include Europe, Asia, and North America, while most nations in Africa will continue to have a relatively young population.

The enormous impact of urbanization

A key metric for understanding population shifts is replacement level fertility, which is the average number of children women need to have to keep the population constant. This rate is roughly 2.1 — two children to replace the mother and father, with 0.1 added on because not all children survive to adulthood.

In dozens of nations, the replacement rate has fallen below 1.5, especially in Europe and East Asia. One reason for the drop is rapid urbanization. In 1950, about one-third of humans lived in urban areas, but that ratio is projected to double by 2050 with about 7 billion people living in cities, many of whom will do so for employment opportunities in our increasingly industrial- and technology-focused global economy. 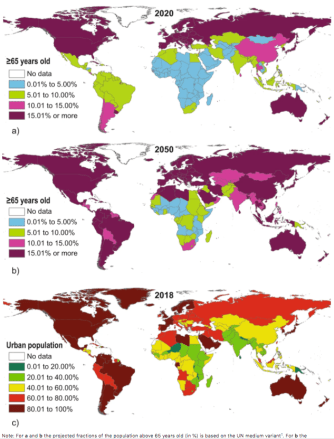 Urbanization affects the population in two key ways. One is that city-dwellers tend to have fewer babies for reasons such as higher cost of living, easier access to contraception, and career-focused urban women choosing to forgo or delay having children, the study noted. Urban life also offers different incentives: Families may benefit from having more children in rural areas, but the same is not true in cities. This explains, in part, why China chose to relax its one-child policy for rural families in the 1980s.

Urbanization also tends to lower mortality rates due to increased wealth and access to healthcare. So, adults have fewer babies while also living longer. The researchers noted that “there may be strong interactions in that increases in the proportion of elderly in a country can put more economic and social pressure on working age population, further decreasing birth rates and/or postponing child births, thus driving fertility rates even lower.” 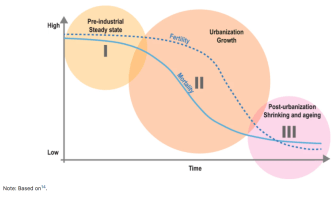 If successful, these interventions could usher in a new demographic phase which the study calls the “vulnerable hourglass,” characterized by low mortality but recently high fertility. This could result in a population with many young and elderly people, but relatively few working-age adults, who could become overburdened. 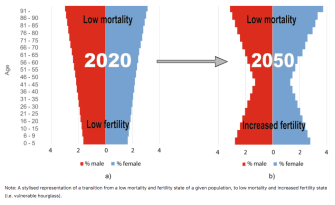 The researchers noted that demographic shifts are complex, and much remains uncertain about how factors like urbanization will affect not only population levels but also the environment and socioeconomic conditions worldwide.

“Considering the quick pace of these changes, especially as the rate of ageing and population shrinking might be underestimated in official statistics, there is a need for urgent action,” the study concluded.

Between the instability of the real estate market and cryptocurrency fluctuations, everyone has been talking about bubbles. But what are they, really?
Thinking

A 19th-century surveying mistake kept lumberjacks away from what is now Minnesota’s largest patch of old-growth trees.
Up Next
Starts With A Bang

The 3 Ways Science Could Break The Cosmic Distance Record

And a combination of all three might take us farther than ever.If you want to see the farthest objects in the Universe, you have to know not only where to look, […]