If you’re reading this as you travel the arctic, odds are you’re probably already a bit confused. Your compass has been, well, strange, lately. That’s because magnetic north has been moving. Quickly. It’s never been stationary, but recently it’s been moving around 485 feet northward toward Siberia every day. That’s about 33 miles per year, as opposed to the average 7 miles a year between 1831 and the 1990s, when its pace quickened.

Fortunately, experts say that if you’re south of the 55th parallel, you won’t notice much of a difference. However, for national defense agencies, commercial airlines, and others that rely on knowing what their compasses are pointing at, it’s a much bigger deal. That’s why the World Magnetic Model — a set of online reference calculators, software, and technical details — had to be updated recently ahead of schedule instead of waiting for the next planned revision in 2020.

There are actually three flavors of north, and they’re all in different places. 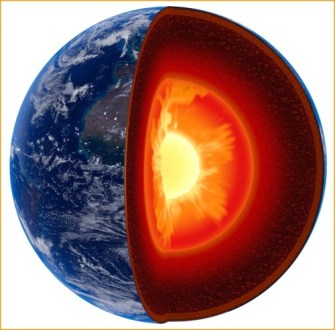 The suddenly accelerating movement of magnetic north has scientists wondering what’s up — not because there’s any danger we’re aware of — because its behavior is one of the few opportunities they have to catch a glimpse of the dynamics inside the earth’s molten outer core.

The most prominent theory is that the speed-up is being driven by, as Nature puts it, “liquid iron sloshing within the planet’s core.” Giant streams of molten iron and nickel continually twist and swirl in the outer core, a pressure cooker that can reach 9,000° F in temperature. The iron is the source of the magnetic fields that comprise the Earth’s magnetosphere. The magnetosphere is the barrier that keeps us protected from destructive ultraviolet solar radiation — its existence keeps Earth habitable. Planets with no magnetic barrier are unable to hold onto their atmosphere. Mars lost its magnetosphere 4.2 billion years ago.

Geophysicist Phil Livermore made the case at an American Geophysical Union meeting in Fall 2018 that what we’re seeing is the latest action in an ongoing tug of war between two magnetic fields down in the swirling outer core. One is under Siberia, and one is under Canada. Historically, the Canadian field has been winning, keeping magnetic north in Canada. However, there’s been a shift, he tells National Geographic, “The Siberian patch looks like it’s winning the battle. It’s sort of pulling the magnetic field all the way across to its side of the geographic pole.”

Some scientists think that the acceleration may be an early sign that Earth’s magnetic poles are about to flip, something that happens every every 200,000 to 300,000 years. Others see no evidence of that. Plus, flips occur over thousands of years, so there’d be no cause for alarm anyway. 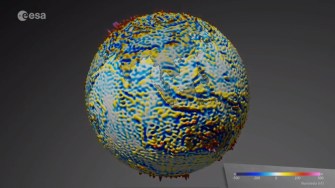 Keeping an eye on magnetic north

The position of magnetic north is tracked by the European Space Agency’s three Swarm satellites orbiting the Earth about 15 times a day — the satellites’ readings are continually checked against ground readings to assess the pole’s movements. Every five years, until now, at least, scientists have updated the math in the World Magnetic Model, whose goal is to “ensure safe navigation for military applications, commercial airlines, search and rescue operations, and others operating around the North Pole.”

Given how things like this tend to play out over geologic time, it would surprise no one if more frequent model updates will be needed going forward.

Tags
aircraftdisaster reliefgeologymagnetismmilitarynaturenorth poleplanetscience
In this article
aircraftdisaster reliefgeologymagnetismmilitarynaturenorth poleplanetscience
Related
The Past
Here is the most terrifying pterosaur ever discovered
Meet your new flying nightmare: Thapunngaka shawi.
The Well
The 3 “demons” that haunted legendary scientists
Darwin, Descartes, and Maxwell all believed in these science ‘demons.’
▸
7 min
—
with
Jimena Canales
Harvard professor debunks the biggest exercise myths
Exercise culture is crazy. But what you need to do is exceedingly simple.
▸
with
Daniel Lieberman
Videos
NASA astronaut explains humanity’s trajectory to Mars
The first human that isn’t an Earthling could be in our lifetime.
▸
5 min
—
with
Robert Curbeam
Videos
Are you developing Alzheimer’s?
Only 2% of Alzheimer’s is 100% genetic. The rest is up to your daily habits.
▸
9 min
—
with
Lisa Genova
Up Next
Creativity
Diversity: Is your team smarter than its smartest member?
In Shane Snow’s Big Think+ video, “Harness Your Team’s Mental Toolkit,” he begins by asserting that “two heads are better than one” is a lie. Also — and as long […]