By 1819, the painter Francisco Goya had been through quite a bit. He had witnessed the chaos of war when Napoleon invaded Spain and the chaos in Spain as its government bounced back and forth between a constitutional monarchy and an absolute monarchy. He had become deathly ill a number of times, occasionally fearing he was going mad. One of these illnesses had left him deaf. Increasingly bitter about humanity, afraid of death and madness, Goya withdrew into a villa outside of Madrid called la Quinta del Sordo, or the Deaf Man’s House.

In the villa, Goya would go on to paint some of his darkest and strangest works. They were painted directly on the walls of the house, and Goya didn’t mention them to anybody as far as we can tell. They were pessimistic paintings that differed wildly from his earlier works, apparently created for his own sake. He never named them, but art historians have given descriptive titles to the works. Collectively, they are known as the Black Paintings.

The tenebrous meaning of the Black Paintings

The 14 Black Paintings are almost invariably painted with dark colors — they’re not called the Hot Pink Paintings after all. The human figures are painted in an expressionistic style that depicts humans as pseudo-monsters, like the blurred, deformed faces in Women Laughing or the whispering goblinoid in Two Old Men. Goya had seen the cruelty that human beings inflicted on one another, and the faces of his human subjects reflect this interior monstrosity.

Aside from this, interpreting many of the Black Paintings is challenging. Goya hadn’t intended to display them publicly and offered no explanation of their subjects. Many of the paintings’ backgrounds are morphing shades of black or brown, lacking details we could use to orient ourselves, and even the titles are the inventions of art historians.

The painting with the clearest meaning, Duel with Cudgels, shows two peasants fighting each other with their legs stuck in a quagmire, unable to escape from one another except by beating their opponent to death. Most scholars agree that this represents Spain’s violent civil war at the time: stuck in their home country, the only way forward for each side was victory.

But to understand the meaning behind The Witches’ Sabbath, where a group stares in horrified fascination at a demonic goat-man, or Atropos (the Fates), where four jet-black figures hover above a landscape, you would have to ask Goya. 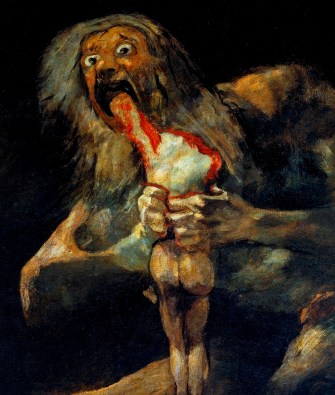 The most famous of the Black Paintings is, without a doubt, Saturn Devouring His Son. For the unfamiliar, Saturn was a Roman god, one of the titans that came before the traditional gods who lived on Mount Olympus. He had come to power by overthrowing his father, Caelus, but it had been prophesied that one of his children would do the same to him. To avoid this, he consumed his children after they were born.

Roman mythology say that Saturn swallowed his children whole — later, they spring from his stomach after Jupiter (or Zeus in the Greek equivalent) escaped being eaten and fed his father a poison to make Saturn vomit up his siblings. Most paintings of this scene depict Saturn greedily swallowing his children whole.

In Saturn Devouring His Son, however, Saturn viciously chews on his partially eaten child — there’s blood everywhere, and his child is clearly dead. The most striking detail, however, is Saturn’s distress. Prior paintings of this subject show Saturn unsympathetically. But in Goya’s version, he is crouched in the dark with a crazed, anguish look on his face. In Saturn Devouring His Son, the titan seems devastated to be eating his children to survive and looks as though he’s gone mad.

It’s easily the most terrifying painting in the collection. We can speculate that it deals with Goya’s own fear of madness and death, but again, there’s no record of what the painter truly intended. The mystery of what this meant to Goya is part of what has captured art historian’s attention for a century.

But there are additional details that suggest Goya did not paint these images. La Quinta del Sordo was originally a one-story home, though the Black Paintings covered the walls of the first floor and a second floor that was added later. Historians have recovered renovation documents from Goya’s time in the villa, none of which mention the addition of a second story. It’s possible that the second floor was added after Goya’s death — meaning the second-story Black Paintings would have been added afterwards as well.

Some theorize that this means Goya’s son Javier created the Black Paintings. Javier’s son, Mariano, would later inherit the house. Mariano had money problems, so its feasible that he attributed the Black Paintings to the famous Goya rather than to Javier to get a better price when he sold the villa.

This is a hotly contested theory, however. The artistic merit of the paintings makes them valuable regardless of the creator, and whoever that was — whether Goya or Javier — had no intention of making them public. Ultimately, they are dark, private ruminations whose murky history adds to, rather than subtracts from, their power.

Being mortal makes life so much sweeter.
The Learning Curve

By challenging your preconceptions, art offers a framework by which you can solve problems.
Neuropsych

When your passion becomes your day job, sometimes the day job becomes a chore.
Neuropsych

What makes a piece of art worth $450 million dollars?

The value of art does not lie in the artwork itself but is instead determined by curators, collectors, critics, and other participants in the modern-day art market.
Up Next
The Present

Did Russia just launch a secret space weapon into orbit?

Russia has launched several so-called “inspector satellites” that could potentially be weaponized.