On May 2, 1808, residents of Madrid rebelled against the Napoleonic forces that had entered their country seven months prior. The aftermath of this unsuccessful uprising was immortalized by the Spanish painter Francisco Goya. The painting, aptly titled The Third of May 1808, leaves little to the imagination. Breaking with the then-dominant Rococo style, Goya used expressive, even abstract brushwork to convey the horrors of a military execution. The French soldiers, indistinguishable from one another thanks to their identical uniforms, point their rifles at the rebels who, facing the viewer, spread their arms in Christ-like poses as they beg for mercy. 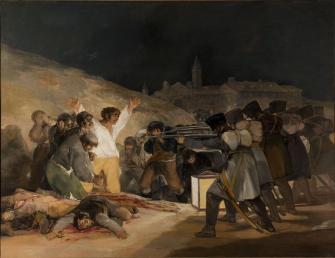 The Third of May 1808 soon became one of Goya’s most famous paintings. Its patriotic contents earned him the reputation of a true nationalist, but whether he deserved that title is not clear. First and foremost, it should be noted that the painting was not created until 1814, when it was commissioned by the country’s provisional, anti-French government. According to the Spanish historian Javier García Marco, Goya was both a liberal and a supporter of the French Enlightenment, one who actually welcomed some of the reforms that Napoleon had sought to introduce to his home country after overthrowing its Ancien Régime.

Where other painters were perfectly content painting portraits of noteworthy people or capturing the beauty of nature, Goya developed a keen interest in social issues. His Caprices, a collection of etchings based on sketchbook drawings published in 1799, tackled subjects ranging from institutional corruption to pedophilia and prostitution. As ideas from the Enlightenment were reshaping France, Goya found himself troubled by the extent to which religious superstition dominated the lives of his fellow Spaniards, summing up his feelings in the title of an etching that depicts a slumbering man surrounded by cats, bats, and owls: The Sleep of Reason Produces Monsters. 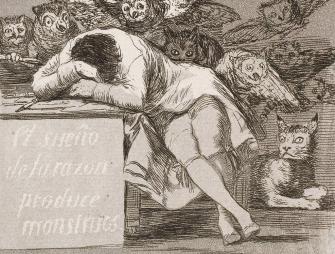 “Owls represented folly,” Martha Schwendener wrote in the New York Times. “Bats stood for ignorance; cats were signs of witchcraft — one can easily see how Goya’s image captures confusion in an age of flux.” Having filled in her readers on 18th century iconography, she lists the questions Goya scholars are still debating to this day. “Is he celebrating Enlightenment reason, or Romantic irrationality? Does he believe in the individual’s ability to act, or is he telling us to duck and cover and come back when the coast is clear?” The answers are not clear; in Goya’s time, vagueness in art was both a virtue and a necessity owing to fearsome persecution from the Inquisition.

Since Goya expressed himself primarily in images, it is difficult to determine how he felt about the historical events he depicted in his paintings. That said, the many royal portraits he created while in service to Spain’s reactionary royal family reveal subtle, yet sharp attacks aimed at his employers. Look, for instance, at his depiction of Charles III. The painting, completed in 1787 under the working title Charles III in Hunting Dress, may seem like an ordinary portrait, were it not for the awkward posture and timid expression with which Goya chose to represent his subject, a proponent of Enlightened absolutism who caved under pressure from the Catholic Church.

The idea that Goya had mocked a monarch with whom biographers insist he was on good terms may seem far-fetched until you compare his rendition of Charles with that of Anton Raphael Mengs, which depicts the same king standing tall and confident in shining ceremonial armor. Even more ambiguous are the portraits Goya made of Charles’ much more conservative successor, Charles IV, and his domineering spouse Maria Luisa of Parma. Though a patron saint of the arts and a devoted fan of Goya’s work, Luisa — along with her lover and prime minister Manuel Godoy — had also orchestrated the downfall of one of Spain’s most progressive ministers, Count Floridablanca.

Goya’s noticeably unflattering depiction of this dysfunctional family, Charles IV of Spain and His Family (1800-1801), has puzzled art historians for centuries. Taken aback by the cuckolded king’s placement away from the center of the image, not to mention the unsettling look in the eyes of his scrawny, crow-like queen, the French poet Theophile Gautier referred to the painting as “a picture of the corner grocer who has just won the lottery.” The contemporary critic Helen Gardner was even more blunt in her description, reducing the country’s most powerful family to “a menagerie of human grotesques.” 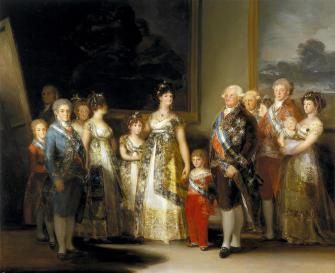 While Robert Hughes claims the family applauded Goya for having achieved their likeness in early drafts, it is hard to ignore the painting’s satirical undertone, especially when considering its main source of inspiration. The portrait, as other art critics have pointed out, seems to be modeled after Las Meninas. Completed by Goya’s predecessor Diego Velazquez in 1656, it depicts a different generation of royals using a composition similar to that of Charles IV and His Family, which fills the central position once occupied by the innocent princess Margaret Theresa with the unsightly Maria Luisa and replaces her attentive handmaidens with the submissive king.

Though Goya depicted the most despotic member of Charles’ entourage, the Prince of Austurias and future king Ferdinand VII, with unusual regality, the unnatural shadow enveloping his stature serves as a clairvoyant prediction of all that is to come. Retaking control of Spain after Napoleon’s defeat, Ferdinand reversed much of the progressive legislation that French occupation had set in motion. Most notably, he disbanded the provisional government and rescinded the Constitution of 1812, which turned Spain from a constitutional monarchy into a quasi-republican parliament built upon concepts like separation of powers and freedom of speech.

We know this move must have offended Goya, because he had commemorated the creation of the constitution in his painting Truth, Time and History. Made between 1804 and 1808, it shows an elderly winged man holding an hourglass saving a young woman meant to represent both Spain and Truth from an oncoming storm. Since an earlier draft of the painting included Goya’s signature owls emerging from the darkness, critics have suggested the painting was meant to function as an allegory for the country leaving its monarchical past behind in favor of a brighter and more democratic future. 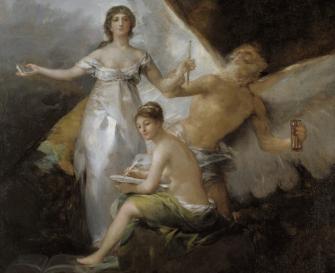 When Goya retired from his position as court painter in 1826, the reality in which he lived had become as surreal and twisted as the fantasies he had represented in his work. When Ferdinand’s regime was challenged by guerilla forces aiming to reimplement their constitution, the king called on none other than the French Army — now no longer under the command of Napoleon — to crush the insurrection. In a turn of events that would have made an appropriate subject for Goya’s Caprices, Ferdinand ordered the rebel leader, a Spanish politician named Rafael del Riego y Nuñez, to be carried to his execution on a pair of donkeys.

Though politics often played a key role in Goya’s work, scholars have yet to reach a consensus on his personal beliefs. While the British art critic Kenneth Clark called The Third of May 1808 “revolutionary in every sense of the word,” Javier García Marco thinks the painter’s identification with the Enlightenment may have been consistently overemphasized. Marco agrees that Goya could be intensely critical of his subjects but interprets this criticism as satirical rather than philosophic. Consequently, he does not define Goya’s later work by an animosity toward the royal family but a loss of faith in humanity as a whole, a loss which he expressed in his Black Paintings.

Born from his frustration with Ferdinand’s archaic regime, the Black Paintings are a collection of images that Goya painted on the walls of his retirement home outside Madrid. Of all the fantastical images the artist created over the course of his career, these are by far the most disturbing. Filled with symbols of senseless violence and pagan rituals, they reflect the insurmountable pessimism that surrounded the artist during his final hours. One terrifying painting, Saturn Devouring his Son, has been interpreted as a metaphor for how Spain’s monarchs held on to power by destroying the republican aspirations of their youngest citizens. 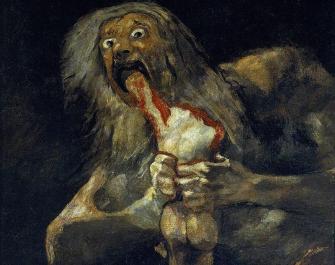 Regardless of whether you choose to see Goya as a brush-wielding philosopher or an expert caricaturist, there can be no question about his artistic genius. Looking at society from a different perspective than his contemporaries, Goya used the medium of visual art not to portray life’s outward appearance but its underlying reality. Occasionally, this reality could be beautiful. More often than not, however, it was ugly and unpleasant. Even if his royal portraits were not intended as political statements, they still reveal the flaws and insecurities of their sitters that, for better or for worse, decided the future of an entire country.

In the Canaan religion, Yahweh was a lesser god, who was assigned the land of Israel. Here’s how he became “God Almighty.”
Up Next
Thinking

Your beliefs are much harder to justify than you think

Coherentism accepts that circular reasoning is probably the best any of us can do.