According to biologist David Carrier of the University of Utah, “In mammals in general, the difference between males and females is often greatest in the structures that are used as weapons.” Men, on average, have 75% more upper-body muscle mass and 90% greater upper-body strength than females, and a new study authored by Carrier suggests why: Eons of male-to-male interpersonal aggression, and more specifically, punching.

The research is published in the Journal of Experimental Biology. 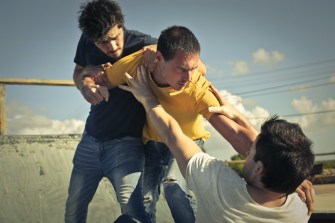 The researchers are, of course, talking averages here, not stating a rule: There are plenty of accomplished female pugilists, as well as lots of males who have no idea how to throw a punch.

Even so, says co-author Jeremy Morris says, “The general approach to understanding why sexual dimorphism evolves is to measure the actual differences in the muscles or the skeletons of males and females of a given species, and then look at the behaviors that might be driving those differences.”

Carrier has been interested in the idea that millennia of male fighting has shaped certain structures in male bodies. Previous research has reinforced his hunch:

(That last one is our favorite. Do you know the German word “backpfeifengesicht?” It’s an adjective describing “a face that badly needs a punching.”)

“One of the predictions that comes out of those,” asserts Carrier, “is if we are specialized for punching, you might expect males to be particularly strong in the muscles that are associated with throwing a punch.” 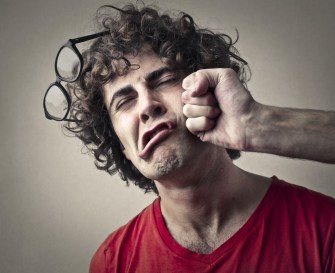 The researchers measured the punching — and spear-throwing — force of 20 men and 19 women. The assumption was that early humans were punchers and spear-throwers.

Prior to testing, each participant had filled out an activity questionnaire so that “we weren’t getting couch potatoes, we were getting people that were very fit and active,” says Morris.

For punching, participants operated a hand crank that required movement similar to throwing a haymaker. The purpose of the hand crank was to spare participants any damage that might be inflicted on their fists by throwing actual punches. Subjects were also measured pulling a line forward over their heads to assess their strength at throwing a spear.

Even though all of the participants, male and female, were routinely fit, the average power of males was assessed as being 162% greater than females. There were no gender differences in throwing strength recorded. Other untested, though presumably likely, hand-to-hand combat activities come to mind including tackling, clubbing, running, kicking, scratching, and biting.

Carrier’s takeaway: “This is a dramatic example of sexual dimorphism that’s consistent with males becoming more specialized for fighting, and males fighting in a particular way, which is throwing punches.”

Boys will be boys

It, er, strikes us as odd that, even in science fiction — hi-tech weaponry notwithstanding — the hero is going to wind up duking it out with some bad guy, or alien, in the climactic battle. What is it about men punching, anyway? Are they more sexually attractive? The study suggests so:

The results of this study add to a set of recently identified characters indicating that sexual selection on male aggressive performance has played a role in the evolution of the human musculoskeletal system and the evolution of sexual dimorphism in hominins.

It’s tough to contribute to the gene pool after being killed in battle.

Also, while the authors aren’t quite saying that males’ historical fighting role is mandated by biology and not by social expectations, neither are they quite not saying it.

As Carrier explain to theU: “Human nature is also characterized by avoiding violence and finding ways to be cooperative and work together, to have empathy, to care for each other, right? There are two sides to who we are as a species. If our goal is to minimize all forms of violence in the future, then understanding our tendencies and what our nature really is, is going to help.”

Tags
evolutiongenderhuman bodymenviolencewarwomen
In this article
evolutiongenderhuman bodymenviolencewarwomen
Related
Health
New blood types are often discovered following medical disasters
New blood types are regularly discovered by an unusual absence or an unusual presence — both of which can result in tragedy.
Neuropsych
How you breathe affects your brain
Your breathing rhythm influences a wide range of behaviors, cognition, and emotion.
13.8
Why the origin of life and the Universe itself might be forever unknowable
There might be a hard limit to our knowledge of the Universe.
Health
COVID, RSV and the flu: A case of viral interference?
Viruses, it turns out, can block one another and take turns to dominate.
Neuropsych
Shopping with your nose: How body odors influence your buying behavior
Sniffing out a deal.
Up Next
Hard Science
Solar Orbiter to capture first images of Sun’s north, south poles
The spacecraft is set to come closer to the star than any other Sun-facing camera before it.