Companies that fail to “pull their weight” to meet environmental standards could risk being delisted from the London Stock Exchange, according to a radical policy proposal from the U.K.’s Labour party.

The proposal is currently a campaign promise that could only become law if the center-left Labour Party wins the general election on December 12. Led by Jeremy Corbyn, Labour is the second biggest political party in the House of Commons.

At a business event this week in London, shadow chancellor John McDonnell vowed his government would ensure listed companies are “pulling their weight” to tackle the “existential threat” of climate change, which would be the party’s “overriding priority” if it wins the election.

“If we are to meet the climate change target to keep global warming to 1.5 degrees above pre-industrial levels, we need to ensure that companies are pulling their weight alongside government,” he said. 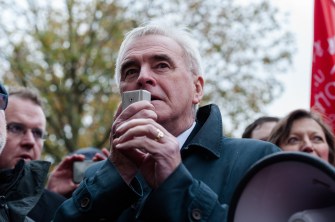 McDonnell didn’t offer specific requirements that companies would have to meet.

“It will be for, basically, those companies themselves to bring forward their proposals and plans – exactly what sort of proposals they’ll be, how effective they’ll be,” he told the PA news agency. “And then during the listing process, they’ll be assessed about how successful they are either performing or how successful their plans will be. On that basis, just as with the rest of the code that there is, they’ll then be assessed and determined if they can be listed.”

McDonnell said some business leaders support the proposal: “Business bodies are calling for companies to improve climate related financial reporting and for all companies to bring forward decarbonization plans.”

However, the London Stock Exchange currently lists some of the world’s largest natural resource companies, and it’s unclear how they’d react to stricter environmental standards.

Labour’s push toward a green economy

In May, McDonnell toldThe Guardian about his proposal to delist companies from the stock exchange, saying his party aims to reduce greenhouse gas emissions to zero by 2050.

“It’s not about threatening or penalizing, it’s saying here’s the steps we need to take to save the planet, it’s as simple as that,” he said. “There’s a sweeping understanding, right the way across, that our administration has to tackle this issue in a way that no one else is taking that seriously.”

In July, oil and gas companies listed on the London Stock Exchange were reclassified under a non-renewable energy category, a move that aimed to provide “greater visibility to other forms of energy such as renewables,” according to Susan Quintin, the managing director of product management at FTSE Russell.

Switching over to a vegan-based diet can drastically cut CO2 emissions. But will Americans actually change their diet?