Brett Kavanaugh and Christine Blasey Ford, a woman who says he sexually assaulted her in the early 1980s, are due to testify about the allegations before the Senate Judiciary Committee on Thursday.

The committee has tentatively scheduled a confirmation vote for Friday morning. There are 51 Republican senators and 49 senators who caucus with Democrats, and six Republicans currently remain undecided. The GOP can only afford to lose one vote; in the event of a 50-50 split, Vice President Mike Pence could cast a tie-breaking vote.

On Sunday, The New Yorker broke a story containing a second sexual assault allegation against Kavanaugh from Deborah Ramirez, a woman who attended Yale University with the judge and claims he exposed himself to her at a party during college, causing her to touch his penis without her consent.

On Wednesday, a third woman came forward to accuse the Supreme Court hopeful of sexual assault. Julie Swetnick, a 55-year-old certified systems engineer who says she’d held multiple government clearances, claimed in a three-page sworn declaration that during high school parties she routinely witnessed Kavanaugh drunkenly engage in inappropriate contact with girls, even suggesting that he and his friends would “spike” punch with drugs at parties so that girls could be gang-raped in side rooms. Swetnick says she was one of those girls. Details about this latest accusation are still emerging.

Kavanaugh has denied all of the allegations.

“The truth is I’ve never sexually assaulted anyone in high school or otherwise,” Kavanaugh said in a Fox News interview Monday night.

On Wednesday, Ford’s lawyers said they sent sworn affidavits to the Senate committee from four people who say she told them about the alleged incident involving Kavanaugh before President Donald Trump had selected him as a nominee for the Supreme Court.

The president has expressed varying stances on the allegations.

In early stages of the story, Trump expressed doubt about the accusations but also said he wanted Ford to have an opportunity to speak to senators.

But on Tuesday night, Trump suggested that Democrats are playing a cynical con game.

The Democrats are playing a high level CON GAME in their vicious effort to destroy a fine person. It is called the politics of destruction. Behind the scene the Dems are laughing. Pray for Brett Kavanaugh and his family!
— Donald J. Trump (@realDonaldTrump) September 26, 2018

What the Ford affidavits say

The affidavits come from three friends of Ford and her husband, Russell Ford, none of whom claim to have been present at the house party where the sexual assault allegedly took place.

Adela Gildo-Mazzon, who said she’s a “good friend” of Ford’s, said she learned about the allegations at a pizzeria in Mountain View, Calif.

“During our meal, Christine was visibly upset, so I asked her what was going on,” Gildo-Mazzon said. “Christine told me she had been having a hard day because she was thinking about an assault she experienced when she was much younger. She said that she had been almost raped by someone who was now a federal judge.”

Another friend, Keith Koegler, claimed Ford told him in summer 2016 of having experienced a sexual assault when she was younger. Ford had been reportedly angered by what she considered to be a light sentence for a Stanford University student who had been convicted of sexual assault after raping an unconscious woman. Koegler said Ford was “particularly bothered by it because she was assaulted in high school by a man who was now a federal judge in Washington, D.C.”

A third friend, Rebecca White, said she spoke with Ford while walking her dog in 2017. Ford reportedly told her that she had recently read a social media post written by White in which she described her own experience with sexual assault.

“She told me that when she was a young teen, she had been sexually assaulted by an older teen,” White said. “I remember her saying the assailant was now a federal judge. I have always known Christine to be a trustworthy and honest person.”

Russell Ford said his wife first shared the details of the alleged incident during a couple’s therapy session in 2012.

“I remember her saying that the attacker’s name was Brett Kavanaugh, that he was a successful lawyer who had grown up in Christine’s home town, and that he was well-known in the Washington, D.C. community,” Russell Ford says. “In the years following the therapy session, we spoke a number of times about how the assault affected her.” 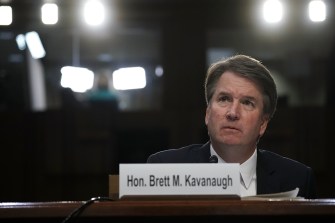 On Tuesday night, the Senate Judiciary Committee announced it had hired outside counsel Rachel Mitchell to question Kavanaugh and Ford on Thursday.

According to a news release from Senate Judiciary Committee Chairman Chuck Grassley, Mitchell is currently on leave from her role as deputy county attorney in the Maricopa County Attorney’s Office, where she’s also chief of the special victims division.

“I promised Dr. Ford that I would do everything in my power to avoid a repeat of the ‘circus’ atmosphere in the hearing room that we saw the week of September 4,” Grassley said in a statement. “I’ve taken this additional step to have questions asked by expert staff counsel to establish the most fair and respectful treatment of the witnesses possible.”

Grassley said Mitchell will ask questions on behalf of the committee’s 11 GOP senators, all of whom are male. Democratic senators will conduct their own questioning.

“As I said earlier, and I think you already know, we have hired a female assistant to go on staff and to ask these questions in a respectful and professional way,” McConnell said. “We want this hearing to be handled very professionally, not a political sideshow like you saw the — put on by the Democrats when they were questioning Judge Kavanaugh.”

“This is not a criminal trial for which the involvement of an experienced sex crimes prosecutor would be appropriate,” wrote Bromwich in a letter to the committee. “The goal should be to develop the relevant facts, not try a case.”

On Wednesday, Ramirez’s lawyers signaled that she’d be willing to testify before the committee.

Critics have noted that even Ramirez herself admitted to memory gaps of the decades-old allegations. However, in an interview on CBS This Morning on Wednesday, an attorney for Ramirez, John Clune, suggested those gaps actually make her claims more credible.

“If somebody’s going to make something up they’re not going to put gaps in their memory, right? She was very, very conscientious about only putting forth the information that she was comfortable with and acknowledging the things that were the gaps in her memory. So that — as a former prosecutor, I can tell you that only helps her credibility because somebody’s not going to falsify a report that has that kind of gap,” Clune said.

If Thursday’s testimony fails to change the minds of more than one Republican senator, Kavanaugh could be confirmed to the Supreme Court on Friday.

Some of these trends may be due, in part, to the lockdown.
Up Next
Neuropsych

Blame our ancestors for why it’s easier to be a couch potato.