Rare earth elements are a set of 17 metals that are integral to our modern lifestyle and efforts to produce ever-greener technologies. The “rare” designation is a bit of a misnomer: It’s not that they’re not plentiful, but rather that they’re found in small concentrations, and are especially difficult to successfully extract since they blend in with and resemble other minerals in the ground. China currently produces over 90% of the world’s supply of rare metals, with seven other countries mining the rest. So though they’re not precisely “rare,” they are scarce. In 2010, the U.S. Department of energy issued a report that warned of a critical shortage of five of the elements. Now, however, Japan has found a massive deposit of rare earths sufficient to supply the world’s needs for hundreds of years. 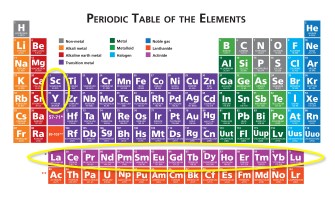 The rare earth metals can be mostly found in the second row from the bottom in the Table of Elements. According to the Rare Earth Technology Alliance, due to the “unique magnetic, luminescent, and electrochemical properties, these elements help make many technologies perform with reduced weight, reduced emissions, and energy consumption; or give them greater efficiency, performance, miniaturization, speed, durability, and thermal stability.”

In order of atomic number, the rare earths are: 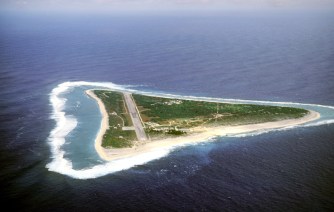 Japan’s engineers estimate there’s 16 million tons of rare earths down there. That’s five times the amount of the rare earth elements ever mined since 1900. According to Business Insider, there’s “enough yttrium to meet the global demand for 780 years, dysprosium for 730 years, europium for 620 years, and terbium for 420 years.”

The bad news, of course, is that Japan has to figure out how to extract the minerals from 6-12 feet under the seabed four miles beneath the ocean surface — that’s the next step for the country’s engineers. The good news is that the location sits squarely within Japan’s Exclusive Economic Zone, so their rights to the lucrative discovery will be undisputed.

Tags
carsmanufacturingmaterialsmedicineminingnatural resourcessustainability
In this article
carsmanufacturingmaterialsmedicineminingnatural resourcessustainability
Related
Health
COVID, RSV and the flu: A case of viral interference?
Viruses, it turns out, can block one another and take turns to dominate.
Health
Chantix, Trulicity, Xeljanz, and most drugs advertised on TV are of “low therapeutic value”
Close to 70% of drugs advertised on TV offer little to no benefit over other cheaper drugs.
Health
New killer CRISPR system is unlike any scientists have seen
Once activated, the CRISPR-Cas12a2 system goes on a rampage, chopping up DNA and RNA indiscriminately, causing cell death.
Health
Visualizing cells at previously impossible resolutions provides vivid insights into how they work
Cryo-electron tomography, or cryo-ET, is the future of cell research.
Neuropsych
“Zombie-like” prion proteins appear to link Alzheimer’s and Down syndrome
Pathogenic, self-propagating proteins called prions found in the brains of people with Alzheimer’s are also found in Down syndrome patients.
Up Next
Starts With A Bang
Ask Ethan: Do Merging Black Holes Create An Information-Loss Paradox?
When two black holes merge together, about 5% of their mass gets lost. Where does that information go?Do merging black holes lose information? They absolutely must, according to General Relativity […]