The planet’s vibes are down.

That’s the consensus from a team of researchers at six European institutions; the study was based at the Royal Observatory of Belgium. Their research, published in Science, found that human-linked vibrations around the planet dropped by 50 percent between March and May 2020—the quietest period of seismic noise since scientists began monitoring the Earth.

Seismometers were invented in China during the 2nd century, though today’s version dates to the 1880s, when a team of British and Scottish engineers worked as foreign-government advisors in Japan. Today, we generally discuss seismic waves in terms of bombs, earthquakes, and volcanic eruptions, though human activity, such as travel and industry, also produce such waves.

As the world slowed down during the pandemic—the researchers call it an “Anthropause”—travel and industry ground to a standstill. For the first time in recorded history, researchers were able to differentiate between natural seismic waves and those caused by humans. The drop was most noticeable in densely-populated urban areas, though even seismometers buried deep in remote areas, such as the Auckland Volcanic Field in New Zealand, picked up on the change.

Dr Stephen Hicks, a co-author from Imperial College London, comments on the importance of this research:

“Our study uniquely highlights just how much human activities impact the solid Earth, and could let us see more clearly than ever what differentiates human and natural noise.”

The team investigated seismic data from a global network of 268 stations spread out across 117 countries. As lockdown measures in different regions began, they tracked the drop in vibrations. Singapore and New York City recorded some of the biggest drops, though even Germany’s Black Forest—famous for its association with the Brothers Grimm fairy tales—went quieter than usual.

The researchers also relied on citizen-owned seismometers in Cornwall and Boston, which recorded a 20 percent reduction from relatively quiet stretches in these college towns, such as during school holidays.

The environmental impact of lockdown has been dramatic. Indian skylines are notoriously grey. This collection of photos shows how quickly nature recovers when humans limit travel and industry. Such photographs also make you wonder why we cannot control emissions to begin with, now that we know the stakes.

“With increasing urbanisation and growing global populations, more people will be living in geologically hazardous areas. It will therefore become more important than ever to differentiate between natural and human-caused noise so that we can ‘listen in’ and better monitor the ground movements beneath our feet. This study could help to kick-start this new field of study.” 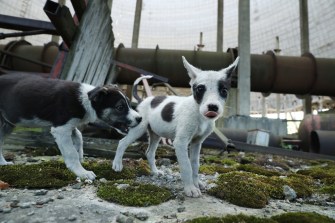 Stray puppies play in an abandoned, partially-completed cooling tower inside the exclusion zone at the Chernobyl nuclear power plant on August 18, 2017 near Chornobyl, Ukraine. Photo by Sean Gallup/Getty Images

The Earth is much stronger than us; humans are its products. In his 2007 book, “The World Without Us,” Alan Weisman details just how quickly nature recovers from our insults. Chernobyl offers a real-world example, while earthquakes caused by fracking-related wastewater injection in Oklahoma are evidence of how much damage human “vibrations” cause.

Weisman’s poetic homage imagines a symbiotic relationship with nature. This relationship depends on our cooperation, however. Weisman knows we aren’t long for this world, nor is this world long for this universe: in just five billion years, give or take, Earth will implode. We all live on borrowed time. How we live during that time defines our character.

While he strikes a hopeful tone, Weisman knows nature will eventually have her way with us.

“After we’re gone, nature’s revenge for our smug, mechanized superiority arrives waterborne. It starts with wood-frame construction, the most widely used residential building technique in the developed world. It begins on the roof, probably asphalt, or slate shingle, warranted to last two or three decades—but that warranty doesn’t count around the chimney, where the first leak occurs.”

The play-by-play of our demise continues, though Weisman offers plenty of proactive advice. The question is, will we be able to live up to it? Sadly, nothing in modern society hints at the possibility.

The only way we seem willing to pause our relentless pursuit of “progress” is when we’re forced to do so, as in the current pandemic. The results, as the team in Belgium shows, are measurable. Whether or not we heed the call to slow our impact remains to be seen. Given precedent, it’s unlikely, though as Weisman concludes, one can always dream.

We’re separating the facts about EVs from the fiction.
13.8

Why the UN cares about climate change — and aliens

Any alien civilization that grows to span an entire planet would spark the same effects that we have. So, what do we do about it?
Up Next
Health