Craig Newmark is a web pioneer, philanthropist, and founder of online classifieds service craigslist. He is a leading advocate of civic and social justice causes, supporting efforts in trustworthy journalism,[…]
Go to Profile 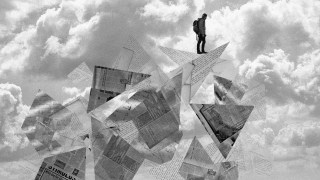 Journalism got a big wake up call in 2016. Can we be optimistic about the future of media?
▸
5 min
—
with
Craig Newmark

CRAIG NEWMARK: In order to have a democracy that thrives and actually that manages to stay alive at all you need regular citizens being able to get good, solid information. But, as it turns out, right now, we are suffering a lot of information warfare where a lot of bad actors, both foreign and domestic, are trying to screw things up, telling us things that aren't true, causing us to lose faith in the press, in democracy, in our institutions. So as far as I could tell, the only constructive way to deal with that is to support a trustworthy press and, as part of that, to support good research trying to figure out: Where is the bad stuff coming from? How do you disrupt that? How do you stop it from happening? And a lot of those things are happening now.

What I'd like to see is a whole bunch of news outlets first commit to being trustworthy. And they do that by signing up for the Trust Project principles. Then I'd like to see them now and then have someone serve as a watchdog, maybe via the International Fact-Checkers Network, which is basically a network of networks. I would like to see fact checkers – in the network or out – submit results that they find to the emerging database done at Tech & Check where a claim, which is fact-checked, could be registered in that manner using a standard database layout. I'd like to see nutrition labels generated by the folks there. And as that's beginning to happen, I'd like to see more and more people work together to create an ecosystem where in all these signals of trustworthiness – the Trust Project stuff, actual fact-checking, seeing if people went ahead and corrected errors that were made – if all these signals could be consolidated and then made available to anyone who wants them, particularly the social media platforms. So there's a lot coming; people are beginning to put into practice the signals of trustworthy journalism, people are beginning to consolidate them and the hope is, in the near-term, that the social media platforms, or anyone else, use those signals of trustworthiness.

I have also faith in advertisers to use them because advertisers are finding that they want their ads to be connected to reporting and other forms of entertainment, that is trustworthy and in the spirit of trustworthiness. So it is a matter of survival for the advertising business as well as the survival of a democracy, and the people pulling together these signals of trustworthiness are paying big attention to the questions of advertising and of journalistic quality. They need to do all this because if they don't to do a good job of it people will trust the advertisements less and less as they see they may be connected to untrustworthy reporting. So trustworthy reporting, when you can see that it really is trustworthy, is a big market differentiator for news outlets, but also for the advertisers who place ads in those trustworthy outlets.

I'm very optimistic about journalism because the people in the business feel that they got a really big wake up call in 2016. They're now doing an increasingly good job. There's a lot of challenges that remain but people have realized that a lot needs to be fixed and there's a lot of momentum behind fixing things. And in the case of people like me who are helping, often with dollars, we've got to get out of the way and stay out of the way. That's what the ethics of funding nonprofit journalism require.