Erin Meyer is the author of The Culture Map: Breaking Through the Invisible Boundaries of Global Business, and coauthor of No Rules Rules: Netflix and the Culture of Reinvention. She[…]
Go to Profile 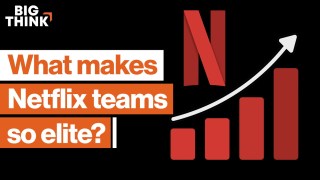 Erin Meyer explains the keeper test and how it can make or break a team.
▸
6 min
—
with
Erin Meyer

ERIN MEYER: When Reed started Netflix, he had this question, this experiment in his mind, which was: Would it be possible, if he created an organization that was made up entirely of top performers? Would it be possible to give them an incredible level of freedom without having to worry about the organization descending into chaos? Because, of course, in most companies, most of the rules and process are put in place in order to deal with employees who are underperforming, or who are maybe not the best employees of the batch, right? So that led him to this idea, this idea of talent density, of creating a high performing team that had very little rules and process tying it down. And the idea is specifically not just that we're any other team, but we're a high performing Olympic team. And I think that's actually an interesting image, because we can all think about top athletic performers, that they recognize that if they want a spot on that top Olympic team, that they're going to have to fight hard to get that spot. Meaning they're going to have to really be performing at their highest level. And when they get there, they know every year they kind of have to try out again. It's not like they're going to be in that spot for life. So, I think that that's an atmosphere that is very attractive to some of the younger generations today that aren't thinking about employment for life, but instead are thinking about opportunities that can allow each of us to shine to our full potential. And then, when that opportunity is done, we can move on to another opportunity. Of course, that also means that Netflix, I would say, is a rather high adrenaline place to work. Just like being on an Olympic team may be high adrenaline. And what I found is that people are both excited and delighted and a little bit exhausted. So, you have to be a person who really is looking for that level of freedom and opportunity, knowing that it may be a position that is also going to use every inch of your neurons while you're working there.

So of course, saying that you want to have a team of all high performers is easy enough, but figuring out how to do that is not so easy. Historically, companies like GE and Microsoft have dealt with this idea of trying to get all top performers by using these processes, which are sometimes called things like "Rank and Yank," where you rank your employees from top to bottom. And for example, with GE, for a period of time, managers were then asked to fire the bottom 10 percent. But since been shown to not be a great management tool, because it creates a lot of internal competition and even backstabbing. Plus, because Netflix is so anti-process, that wouldn't work there anyhow. But instead, what they do at Netflix, which I think is actually a very interesting exercise for any manager at any company, is something that they call the keeper test. And the keeper test is just a very simple exercise that you, as a manager, do alone, which is that maybe once or twice a year, you kind of sit down by yourself and you reflect. And you imagine, okay, Crystal comes into your office, someone on your team. And she says, 'Erin, I've come here to tell you I'm leaving your company. And I found a great job somewhere else. And I really enjoyed working with you, but I'm sorry, it's over.' And when this employee tells you that she or he is going to leave the company, what's your reaction? That's the keeper test, right? You have to ask yourself, how would I react? And with some employees, you might think, 'Oh my gosh, if Crystal told me she was leaving the company, I would be devastated. I would fight hard to keep her.' Right? Then you know she's a keeper. The other option of course might be less positive. Maybe you would feel kind of neutral about it. Maybe you would even feel kind of relieved. And you might even feel a little bit excited about who you were going to be able to get in order to fill that role. And of course, that's the test, right? If you wouldn't fight hard to keep that person, then that's not someone that should be on your team.

Performance is contagious. And what that means for a manager is that if you have one individual on your team who's a little bit of a performance problem, that's not an individual problem. An individual performance problem is a systemic problem that impacts the entire team. And if you've got enough of those in your company, that impacts the entire organization. So I think it's really important that we think about that kind of idea of that one mediocre employee pulling performance down, or that if you have a team of all stunning colleagues, how that may just then cycle up. And that's what we've really seen at Netflix, like an organization where they've kind of weeded out the adequate or mediocre performers. And then we've seen just the success of that organization cycle up.