In the wake of the latest mass shootings throughout the United States, the American Psychiatric Association (APA) has pushed back against politicians linking mental illness to the issue. The country’s largest organization of psychiatrists released a number of statements condemning what they considered a faulty line of thinking.

The APA believes that people with mental illness are at risk for greater stigmatization because of this kind of rhetoric. Arthur C. Evans Jr., Ph.D., the CEO of the APA, released a statement outlining his thoughts on the matter. In it, he wrote:

“Blaming mental illness for the gun violence in our country is simplistic and inaccurate and goes against the scientific evidence currently available.”

Countless studies have found that there is no conclusive evidence that marks the mentally ill with having a greater predisposition for gun violence.

“The United States is a global outlier when it comes to horrific headlines like the ones that consumed us all weekend. Although the United States makes up less than 5 percent of the world’s population, we are home to 31 percent of all mass shooters globally, according to a CNN analysis. This difference is not explained by the rate of mental illness in the U.S.”

The APA believes that it’s our access to guns that foster these calamities. 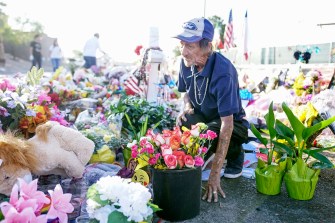 Antonio Basco, whose wife Margie Reckard was one of 22 persons killed in the recent El Paso mass shooting, lays flowers in her honor.

It’s a common refrain from gun advocates after a terrible tragedy. That guns aren’t the problem, the mentally deranged are. A recent study from the University of Texas Medical Branch found that gun access, not mental health leads to gun violence. The researchers write:

“Americans own nearly half of the estimated 650 million civilian-owned guns in the world. Access to this final, fatal tool means more deaths that occur more quickly, whether in a mass shooting or in someone’s own home.”

The aforementioned study looked into three potential links to gun violence: gun access and ownership, mental illness, and personality traits. The only thing that conclusively predicted gun violence was access. The researchers added:

“Counter to public beliefs, the majority of mental health symptoms examined were not related to gun violence. Instead, access to firearms was the primary culprit.”

Again, Evans echoed this in his APA statement. Psychological scientists have repeatedly found that the majority of people will mental illness are not violent. Currently, there’s no singular way to predict whether or not someone will engage in gun violence either.

The main driving psychological driving force behind mass shooters is a bit confused. Liza H. Gold and Robert I. Simon’s book Gun Violence and Mental Illness found that less than 5 percent of mass shootings have been connected to someone with a psychiatric disorder, or one that could be diagnosed.

Yet, to the psychiatric layperson (especially pundits and politicians) — the presumption to commit a heinous crime such as a mass shooting, seems like just the thing an insane person would do. No matter the categorization from the APA, or the DSM-5 keepers — common sense dictates that there is something seriously wrong with these people.

The psychological profile for mass shooters is usually a young angry and isolated male. Regardless of their ill-fated crusades, social woes, color or creed, they are all intellectually stunted idealogues. Radicalized by their sources of hate, ignorance and bigotry — the unholy three — and unfettered access to guns leads us to this ceaseless problem.

Yet, psychiatrists point out, again, that other regions of the world have the same exceptionally high amount of mental disorders, such as Western Europe. However, there is not the same high number of mass shootings. The care for our mentally ill and other ideas being floated around — among them, the dearth of our open mental institutions — are a related but separate problem entirely.

“The combination of easy access to assault weapons and hateful rhetoric is toxic. Psychological science has demonstrated that social contagion — the spread of thoughts, emotions and behaviors from person to person and among larger groups — is real, and may well be a factor, at least in the El Paso shooting.”

Currently, the best in class have a plan to lessen the frequency of mass shootings. Evans writes:

“Based on the psychological science, we know some of the steps we need to take. We need to limit civilians’ access to assault weapons and high-capacity magazines. We need to institute universal background checks. And we should institute red flag laws that remove guns from people who are at high risk of committing violent acts.”

The APA mentions that President Trump has called on the nation to “do a better job of identifying and acting on early warning signs.” Research, that they think they can eventually do. Trump has also put forth the idea that he wants social media companies to develop A.I. that could flag potential mass shooters before they strike — something right out of a Philip K. Dick novel.

Evans ends his statement with a true call to arms, to get past the rhetoric once and for all and create real solutions.

“The president clearly said that it is time to stop the hateful rhetoric that is infecting the public discourse. We ask that he use his powerful position to model that behavior. And we ask that the federal government support the research needed to better understand the causes of bigotry and hate, and their association to violence, so that we may devise evidence-based solutions.”

Symbolic gestures often speak to our psyche in ways no rational action could ever speak to our intellect.
Health

Types of therapy are about as different as the people who use it.
Up Next
Starts With A Bang

Ask Ethan: What Has TESS Accomplished In Its First Year Of Science Operations?

An illustration of NASA’s TESS satellite and its capabilities of imaging transiting exoplanets. Kepler has given us more exoplanets than any other mission, and it revealed them all through the […]