Mentally ill people far more likely to be the victims of mass shootings, than the perpetrators of them

How do we even define mental illness? 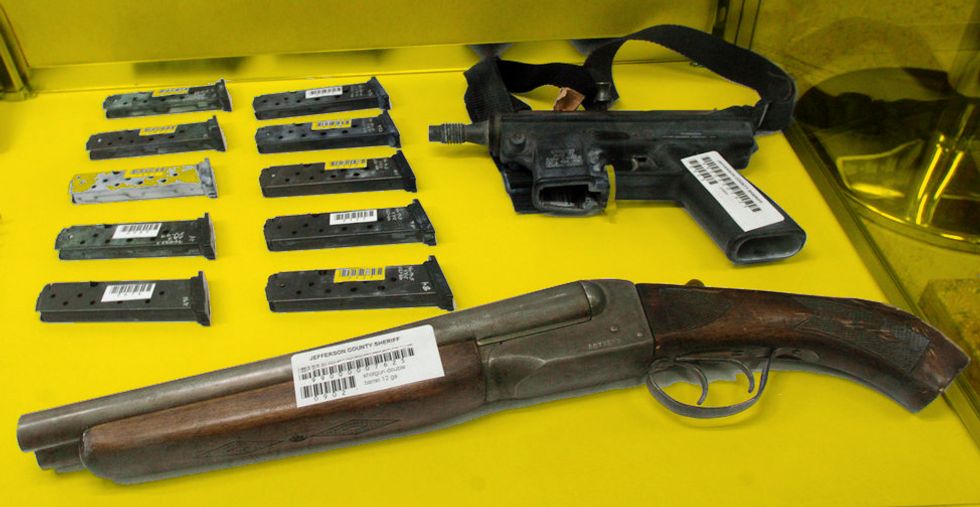 The guns used in the Columbine shooting on display. Credit: Getty Images

After every mass shooting, a number of politicians and pundits highlight the need for better mental healthcare in American society as a way to hedge against future incidents. But according to Liza H. Gold and Robert I. Simon, the authors of the book Gun Violence and Mental Illness, less than 5% of such shootings are actually perpetrated by someone with a psychiatric disorder—or at least one that can be diagnosed.

The psychological profile for a mass shooter is usually an angry young man who’s socially isolated. The Parkland, Florida shooter fits the profile. Not only was Nikolas Cruz 19 and marginalized, he’d been referred to authorities for violent threats several times and had amassed a cache of weapons. Yet, he had never been diagnosed with any sort of mental illness. The Las Vegas shooting that occurred last October — the largest in American history — saw 58 dead and over 500 injured. It was perpetrated by a 64-year-old with no criminal background or history of mental illness. Stephen Paddock was well off, had a relatively normal social life, and wasn’t considered angry or disturbed by anyone who knew him.

Professor Matthew Miller at Northeastern University has written several papers on gun violence. He said that if a psychiatric disorder was the main driver, the high number of mass shootings in the U.S. would mean an exceptionally large mentally ill population. Rather, it has about the same rate of mental illness as other developed countries, like those of Western Europe for example.

Someone with mental illness is far more likely to be the victim of a shooting than the perpetrator. Credit: Getty Images.

Thirty years of solid research points to no link between mental illness and gun violence. In 2015, ProPublica interviewed Dr. Jeffrey Swanson, a psychology and behavioral sciences professor at Duke University School of Medicine and one of the leading experts on mental illness and violence. According to Dr. Swanson, schizophrenia, bipolar, and depression combined only account for about 4% of all cases of violence in the US annually. “The vast majority of people with mental illness are not violent and never will be,” he said.

A report written by Northeastern University criminologist James Alan Fox found that between 1966 and 2015, only 14.8% of mass shootings were carried out by a known psychotic. Another study found that just 23% of all mass killers were mentally ill. Improving mental health care could help loads of people in the U.S., and should be a national priority. But it’s not going to stop all mass shootings.

Only 4% of all interpersonal violence committed annually in America can be attributed to a psychiatric disorder. And in fact, the mentally ill commit less than 1% of all gun violence each year. Columbia University forensic psychiatrist Michael Stone keeps a database on mass shootings. As of 2015, out of 235 incidents, only 52 were perpetrated by someone diagnosed with a mental illness, just 22% of the total.

The data is clear. Those with a psychiatric condition are more likely to be the victim of gun violence than the perpetrator. As such, expanded firearm restrictions or background checks for the mentally ill will be ineffective in stopping gun rampages. Risk factors for the kind of violence that happened at Marjory Stoneman Douglas High include a history of child abuse, substance abuse, and living or growing up in a violent environment. One doesn’t have to be schizophrenic or bipolar to experience such things.

Broadly limiting access to guns in the US would be effective but remains highly controversial. Credit: Getty Images.

President Trump has raised the idea of resurrecting mental health hospitals, but advocates and patients say such an act would more likely infringe on the rights of our most vulnerable, and make them susceptible to inhumane conditions and abuse. Following mental health records won’t do the trick, either. Not only is it unfair and irrelevant, there’s a problem with noteworthy mental health issues being recorded or even reported.

What complicates things further is the understanding that in psychology there isn’t even a standard use of the phrase “mentally ill.” Professor Stone writes in his 2015 report, “Not all who use the term use it in the same way, not even within the field of psychiatry, let alone within the much wider public sphere.” It’s also difficult to diagnose psychopathy. Note that psychopaths only make up about 1% of the population. The same with schizophrenics, just 1%. And sadism even among these conditions is rare.

The profile of a mass shooter is a male prone to grudges. Besides being an outcast and a likely victim of child abuse, he’s a substance abuser and lives in a violent place or has in the past. Usually paranoid and disgruntled, he takes time to plan and carries out his killing spree as an act of revenge against those he feels slighted him. The shooter never reflects on what he’s done wrong in his life, but instead harbors feelings of superiority over his victims and blames them for his woes. Still, there’s an overwhelming hopelessness in such an act, and most mass shooters commit suicide or are killed by police in the aftermath.

Without broadly limiting access to guns in the U.S., which is highly controversial, Dr. Swanson suggests that perhaps a better way would be to scan for those who have a history of violence. A restraining order, a DUI or DWI, or a conviction for a violent act would set off a red flag. Enough of these would trigger a firearm restraining order, which is when one's guns are taken away by the authorities. But such a system could only be effective if a constellation of community workers, such as police, teachers, social workers, and mental health professionals, and even federal authorities like the FBI, cooperate closely to notice someone with a series of red flags and take the appropriate measures.