Gun violence is lower in U.S. states where people must get a license before buying a gun, according to a new paper from the Johns Hopkins Center for Gun Policy and Research.

Before buying a gun, states require residents to pass a federally mandated background check (if purchasing from a licensed dealer) and, depending on the state, obtain a permit or license. To obtain a gun license, states typically require people to submit fingerprints, apply for a permit, and, in some cases, complete a firearms safety course.

“Licensing differs from a standard background check in important ways,” Cassandra Crifasi, deputy director of the Johns Hopkins Center for Gun Policy and Research and study lead author, said in a news release. “Comprehensive background checks are a necessary component of any system designed to keep guns from prohibited persons, but they are insufficient to reduce firearm-related deaths without a complementary system of purchaser licensing.”

In addition to strengthening the screening process, licensing laws could also help to reduce gun homicides and suicides by preventing impulse purchases. After all, obtaining a license typically takes several days, while prospective gun buyers in states like Missouri can obtain a firearm in minutes, assuming they pass the federally mandated background check. 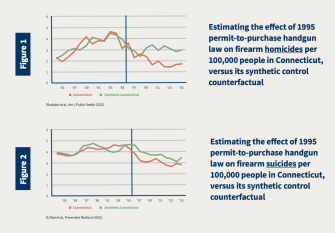 The researchers cited Connecticut as an example of a state with long-held licensing laws. In 1995, the state passed a law requiring prospective gun buyers to “submit an application to local law enforcement, including fingerprints, and complete at least 8 hours of approved handgun safety training,” and also increased accountability for gun sellers. Since then, gun homicides have dropped by 40 percent and gun suicides fell by 15 percent, the researchers wrote.

Most Americans seem to support licensing laws: About 75% of adults support laws that require prospective buyers to get a license from law enforcement, with about 60 percent of gun owners supporting such laws, according to a 2017 study published in the American Journal of Public Health.

“Given the body of evidence on the effectiveness of licensing laws and the increasing levels of support among the population, including gun owners, policy makers should consider handgun purchaser licensing as a complement to [comprehensive background check] laws,” the researchers of the new study concluded.

The Bomber Mafia nearly changed the world—and you've likely never heard of them.

Will coding become a basic life skill? Yes and no, say experts

Almost all experts agree that coding will become nearly as ubiquitous as literacy in the future. But the nature of coding in the future may be very different.