She seems like a very happy young girl looking forward to a bright and wonderful future. So nice to see! https://t.co/1tQG6QcVKO

In August 2018, Greta Thunberg skipped school on a Friday afternoon to stand outside Swedish parliament with a sign reading Skolstrejk for Klimatet, Swedish for “School Strike for Climate.”

A year later, she spoke at the recent 2019 United Nations Climate Change Conference and the United Nations Climate Action Summit, inspired a four million–person protest, and now, she’s won Time magazine’s Person of the Year Award. Her meteoric rise at the age of only 16 has both earned her praise as a “Joan of Arc” and scorn as a “puppet,” “mentally ill,” a “little brat,” and “a very happy young girl looking forward to a bright and wonderful future.”

In part, Thunberg was awarded the Person of the Year due to the so-called “Greta Effect”; her activism has had tangible impacts on organizations and governmental policy and has resulted in a large protest movement largely composed of young people.

For example, Thunberg’s refusal to fly in airplanes has resulted in a new term in Sweden: flygskam, or “flight-shame.” As a result, domestic flights dropped by 8 percent from January to April of 2019 compared to a 3 percent drop for the whole of 2018. Correspondingly, rail travel saw an 8 percent bump over the last year.

Rather than fly, the activist has traveled by rail or a carbon-neutral yacht. Though the term “yacht,” inspired accusations of hypocrisy, it should be noted that the seacraft had no shower or toilet, which doesn’t entirely mesh with the wasteful pleasure cruises typically associated with yachts.

By August 2019, sales of children’s books related to climate change had doubled, which publishers attributed to the Greta effect. While sharing the stage with Thunberg, the President of the European Commission vowed to dedicate one in every four euros of the EU budget to be dedicated toward mitigating climate change. Crediting the activities of Thunberg in part, U.S. philanthropists established the Climate Emergency Fund, committing half a million pounds (a bit more than $650,000) with tens of millions more promised to fund climate strikes like Extinction Rebellion, the school strike, and other climate-related protest movements. 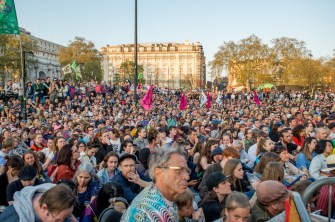 Most importantly, however, protest movements directly motivated by Thunberg’s own activism have involved young people in the millions.

Thunberg herself was inspired by the school strikes organized by teenage activists from Marjory Stoneman Douglas High School. In the aftermath of a school shooting at the same high school, students organized the March for our Lives in support of greater gun control.

Thunberg’s own protest started out as a solitary one. “I tried to bring people with me,” Thunberg told Democracy Now!, “but no one was really interested, so I had to do it alone.” But another person showed up on the second day. Over time, more and more people joined her protest, until thousands were camped out in front of Sweden’s Parliament.

The fact that the protest movement is mostly composed of young people is critical. “You say you love your children above all else,” said Thunberg at the U.N. Climate Change Conference. “And yet you are stealing their future in front of their very eyes.” Many of the most successful protests have been driven by young people: the Velvet Revolution, the Black Lives Matter movement, the Greensboro sit-ins, and countless others.

A long road ahead

Many criticize Thunberg and the climate change protest movement as being overly dramatic. However, dramatic rhetoric appears to be merited. In an article for New York Magazine, journalist David Wallace-Wells described a conversation he had with energy expert Vaclav Smil when he asked about the planet’s chances of staying below the Paris Agreement’s threshold of two degrees Celsius of warming.

Emissions are still at an all-time high, though their growth is slowing. Ultimately, only government policies will be able to reverse a trend of this magnitude. But governments respond to public opinion and protest. Given that the Person of the Year is selected based on “who most affected the news and our lives… for better or for worse,” the fact that they are a teenage climate activist should be cause for celebration.

Tags
activismglobal issuesnewspolicyProtestsocial change
In this article
activismglobal issuesnewspolicyProtestsocial change
Related
The Present
Sludge: Americans spend 11.4 billion hours filling out federal paperwork
Unreasonable burdens prevent people from thriving. Eliminate them.
The Present
How can we fix America’s police?
Three ideas could help create the police force that Americans want.
The Present
Thanks to Iceland, the four-day workweek is coming
A new study from Iceland confirms that a shorter workweek improves productivity.
Hard Science
New research finds that reforesting Europe would increase rainfall, fighting a drying trend
Trees store carbon dioxide, have a cooling effect in cities, and reduce flood risks.
The Present
Want to tackle poverty? Start with blindness
Nearly 90% of the world’s blind live in low-income countries.
Up Next
Hard Science
Mars 2020 will hunt for ‘microfossils’, signs of ancient alien life
The Jerezo crater — where Mars 2020 is set to land — could be a good place to find signs of past life on Mars.