In Florida, a South Broward High School senior named Elijah Ruby was suspended last week for distributing promotional flyers about the global climate strikes. Ruby said he’s previously been reprimanded by school officials for handing out flyers about the protests, but was unaware that continuing to distribute them would lead to suspension and not being allowed to attend prom.

“I feel disappointed because those are the sort of things you remember for a long time,” Ruby, 17, told the Miami Herald. “You remember going with your girlfriend to prom.” 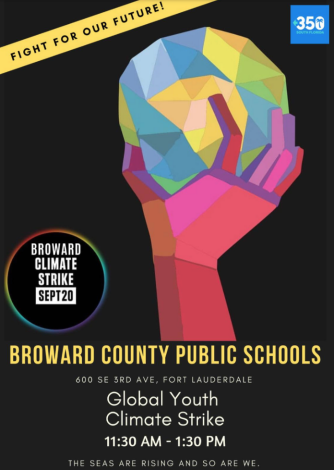 A flyer that Ruby distributed

School officials also denied Ruby’s request to sponsor a field trip to the Global Youth Climate Strike on Sept. 20, saying the event might be dangerous.

“I think that’s extremely short-sighted thinking,” Ruby told the Miami Herald. “Because what is going to be most dangerous for kids is that we have eleven years to totally change our economy and eliminate carbon in the atmosphere or we will face devastation.”

Ruby’s mother, Stacy Wolfe, said she supported her son and was disappointed in the school’s reaction.

“I totally support his belief and his action and his wanting to stand up for it,” Wolfe told the Miami Herald. “It is unfortunate that the school has to resort to a suspension for such a noble cause.”

A spokesperson for Broward County School District said schools have “processes in place regarding approvals for the distribution of materials, including fliers, on campus,” and that students who distribute materials without approval may be disciplined.

The global climate strikes kicked off in full force on Friday, September 20. Millions of people — many of whom are students skipping school, some are employees walking off their jobs — are gathering in more than 160 countries on all seven continents to call for more urgent action on climate change and an end to the age of fossil fuels. Although it’s still unclear exactly how many people are protesting, it’s likely to be the largest coordinated climate protest in history.

In New Delhi, India, protesters were chanting, “Eco, not ego!” and “I want to breathe clean!” Outside of the Houses of Parliament, in London, protesters chanted, “Save our planet!” In Washington, D.C., crowds chanted, “This is what democracy looks like!”

New York City has allowed more than 1 million public school students to miss classes in order to protest, while a handful of U.S. companies — among them, Ben & Jerry’s, Patagonia, Burton, Lush, and SodaStream — are closing down or going offline for at least some part of Friday.

“We’re going to disrupt our ‘business as usual’ on Sept 20 to demonstrate our solidarity with global climate strikers,” Ben & Jerry’s higher-ups said in a statement. “We believe we all must change the way we live, and the way we do business.”

The global protests come days ahead of the 2019 UN Climate Action summit, in which world leaders from dozens of countries will meet in New York to discuss progress on past climate pledges and plans for the future. “Bring plans, not speeches,” United Nations Secretary-General António Guterres reportedly told heads of state before the summit.

This is INCREDIBLE! People are turning out to demand change in all 7 continents! We are fired up and ready to go #ClimateStrike in: NYC DC Chicago Montana SF LA There is still time to join us! Text ‘CLIMATESTRIKE’ to 21333 to find one near you. #StrikeWithUshttps://twitter.com/EricHolthaus/status/1175007643322265600 …

It’s unclear what effect the protests will have on the world’s policymakers. The organizers of the global climate strike are demanding broad changes: the transition away from fossil fuels to 100 percent renewable energy, “climate justice” for everyone and, more curiously, “reparations,” presumably from developed countries whose policies and consumption have accelerated climate change in other countries. But in the short term, the organizers say:

“Our greatest hope is simply to show that those working on this crisis have the backing of millions of human beings who have a growing dread about the climate emergency but who have so far stayed mostly on the sidelines. It will take all of our efforts to get millions of us in the streets worldwide. So join us. Our window for effective climate action is closing fast.”

Here’s a look at some of the global climate strike protests happening today around the world.

Huge influx of folks coming into Grant Park for the youth led #ClimateStrike march to Fed Plaza in Chicago #GlobalClimateStrikespic.twitter.com/YcbiqvJTff

Leader of Chicago’s Global Climate Strike tells marchers that Federal Plaza, where they are headed, is “full.”pic.twitter.com/LP6zIFP1Bi 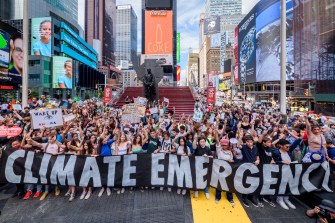 Downtown Berkeley BART is jam packed with Berkeley High students heading to the #ClimateStrike in San Francisco, aiming to converge at Nancy Pelosi’s office. A few of them brought their preteen siblings, which seems hella cute—except that they’re fighting for their lives.pic.twitter.com/Z1C45u2xAy

God, you’re hopeless Tom. Here’s some marchers in Galway, Ireland, with a message for you and all the other denialist dinosaurs. #ClimateMarchpic.twitter.com/peCiCTwgAi

We love this! Women are amongst the worst victims of the climate crisis but wearefightingback! #LahoreClimateMarch #ClimateMarchpic.twitter.com/Pga1fzOPy4

With the on fire, Nairobi is fired up to combat #ClimateChange! Shout out to my @CIAT_Africa & @_PABRA colleagues who joined the Global Climate Strike in Nairobi!!!! #KenyaClimateAction #ClimateStrike #ClimateMarchpic.twitter.com/mOva406Mc4

THOSE ARE ALL PEOPLE!!!! #Freiburg, #Germany!! #ClimateStrike We have the solutions to the #climateemergency, time to implement them! #ClimateMarch #FridaysForFutures #FridayMotivation #FridayThoughts #GreenNewDeal #Go100re @GretaThunberg. Vid via @F4F_Freiburg.pic.twitter.com/2r5Vvy4B9Q

Huge crowds at the Islamabad #ClimateMarch. There is suddenly a climate movement in Pakistan. #ClimateActionNowpic.twitter.com/jp9jHusiAL

An estimated 100,000 students in Berlin showed up for our planet and our future today. #ClimateStrikepic.twitter.com/Ub5T6NOEp9

Here’s why mega-eruptions like the ones that covered North America in ash are the least of your worries.
Life

All marbled crayfish descended from a single clone discovered in Heidelberg, Germany in 1995.
Up Next
The Present

Millennials and the rise of tiny homes

Are tiny homes just a trend for wealthy minimalists or an economic necessity for the growing poor?