American has a “middle skills” gap. Good jobs requiring a high school diploma have contracted since the 1990s, while workers wielding a college education continue to excel. But according to a report out of Georgetown University, two out of three entry-level jobs today require some training and education beyond high school but not a bachelor’s degree. This demand for middle-skilled workers has resulted from the assimilation of work by the digital revolution, while people have been outpaced by the technology they rely on.

As Stephane Kasriel, former CEO of Upwork, wrote for the World Economic Forum: “Our current education system adapts to change too slowly and operates too ineffectively for this new world. […] Skills, not college pedigree, will be what matters for the future workforce” To bridge the skills gap, many employers and institutions have turned to online education and other non-traditional models. One such employer is Google.

Unable to find enough qualified candidates to fill necessary positions, the Silicon Valley titan created its own certification course of Coursera to teach people IT support skills. The program proved so successful that earlier this week, Google announced it would expand the program to include three new courses. It’s also offering scholarships to help in-need people enroll. 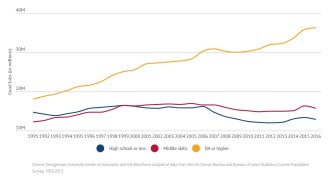 A chart showing the increase and decrease of “good jobs” based on level of education required.(Photo: Georgetown University)

The new suite of courses will train students in skills necessary for data analyst, project manager, and UX design positions. While Google has released no specifics on these courses, they will likely follow the current certificate course template. This means they won’t require a degree to enroll, will be entirely online, and will be taught by Google Staff.

Like other massive open online courses (or MOOCs), they will likely be self-paced. According to Coursera, Google’s current IT support course takes between three to six months to complete at $49 a month. To offset those costs, Google is also offering 100,000 need-based scholarships.

“College degrees are out of reach for many Americans, and you shouldn’t need a college diploma to have economic security. We need new, accessible job-training solutions—from enhanced vocational programs to online education—to help America recover and build,” wrote Kent Walker, SVP of Global Affairs at Google, in a release.

By the courses’ end, students will have created hands-on projects to build their portfolio and will receive a certificate of completion. In the release, Walker states that Goggle will consider the certification as “equivalent of a four-year degree” for job seekers. The current IT support course has credit recommendation from the American Council on Education, meaning it may be possible for students to translate the certificate into some college credits. No word on whether the new courses will also have credit recommendation.

“Launched in 2018, the Google IT Certificate program has become the single most popular certificate on Coursera, and thousands of people have found new jobs and increased their earnings after completing the course,” Walker added.

As part of the initiative, Google.org, the company’s charity branch, has committed $10 million in job training grants. The grants will go to Google’s nonprofit partners, such as YWCA, JFF, and NPower, to help women, veterans, and underrepresented groups obtain jobs skills relevant to today’s in-demand positions.

College education is failing us all. Can we design something better?www.youtube.com

The need for middle-skills will grow as the American workforce continues to digitize at an extraordinary rate. According to the Brookings Institution, in 2002 just 5 percent of jobs studied—which covered 90 percent of the workforce—required high-digital skills while 40 percent required medium-level skills. By 2016, that percentage rose to 23 and 48 respectively. In the same period, jobs requiring low-digital skills fell precipitously, from 56 to 30 percent. Beyond rapid job growth and competitive advantage, those with the skills are set to reap the economic rewards.

But more needs to be done.

As of this writing, more than 275,000 people have enrolled in Google’s IT Support course, but it’s unclear how many companies will accept the certificate as proof of capability. While Google and its Employer Consortium, a group of employers who connect with Google to find prospective candidates, may consider the certificate equivalent to a four-year degree, MOOC certifications lack the universality of either associate’s or bachelor’s degrees. Without mainstream acceptance, graduates may be contending with each other within a puddle of prospective companies, not the vast, oceanic marketplace of corporate America.

And the COVID-19 pandemic hasn’t halted but accelerated digitalization as companies widely adopt new technological trends to survive. Many of the 20 million unemployed Americans may suddenly need to upskill or even find their jobs outsourced to the digital realm. They’ll need a quick, yet employer recognized, means to acquire new skills to help find work.

Ten million dollars will buy Google—a company valued at one trillion dollars—a nice commemorative brick in the path to a solution and hopefully help many lives. But we have many miles of work to go.

The replication crisis has debunked many of psychology’s fair-haired hypotheses, but for the marshmallow test, things have only become more interesting.
Smart Skills

The creator of the index called it a public utility for accessing the “vast ocean” of human knowledge.
The Present

Almost 10% of all new jobs created between 2020 and 2030 will unfortunately be some of the lowest paid.
Leadership

The Chegg cheating scandal reveals a critical need to rethink the student experience in post-COVID education.
Up Next
Starts With A Bang

Starts With A Bang Podcast #58 — Gravitational Waves From Space