New research offers the very dimmest of good news in the global effort to restrict the rise in temperatures to below 2°C in accordance with the Paris Agreement: The growth in emissions in 2019 slowed down to an estimated 0.6 percent, as compared to 2018’s 2.1 percent and 2017’s 1.5 percent.

Regrettably, this modest growth rate in emissions still meant that 2019 was another record year, with around 37 gigatons of CO2 released into the atmosphere. Although the reduced growth rate could indicate a turnaround, the researchers anticipate that the further growth of developing countries will ensure that further rises in emissions are likely in 2020 and beyond.

The findings are discussed in three new articles in Earth System Science Data, Environmental Research Letters, and Nature Climate Change. While the results are disappointing, they do provide insight into where further reductions need to be made and there are small morsels of good news tucked away within the data.

For instance, emissions from the U.S. actually decreased by 1.7 percent in 2019. While there is no such thing as a clean fossil fuel, some are worse than others. The U.S. has done a tremendous job moving away from the use of coal, a particularly dirty form of fuel. Since peak usage in 2005, the U.S. has cut its coal emissions by 50 percent down to levels not seen since 1965. Coal plants are increasingly retiring, and no new coal plants are being constructed.

However, coal usage in the U.S. is not being replaced by renewable energy for the most part; rather, natural gas is stepping in to take its place. Natural gas is sometimes construed as a “bridge fuel” that countries can rely on during their transition to renewable energy, but it only serves that role if that transition actually occurs. Fortunately, wind and solar generation in the U.S. did grow by 8 percent and 11 percent in 2019.

The U.K. and E.U. is doing even better: E.U. emissions dropped by 1.7 percent and reduced coal emissions by 10 percent. But while the U.S. has primarily replaced coal use by natural gas, the U.K. has made up the difference with a 50-50 split between natural gas and renewable energy.

Developing countries like India and China have offset these reductions, however, increasing their emissions by 8 percent and 2.6 percent, respectively. It’s important to remember that the U.S., E.U., and China together account for more than half of all global emissions in CO2, so any reductions in emissions from these three countries is excellent news. 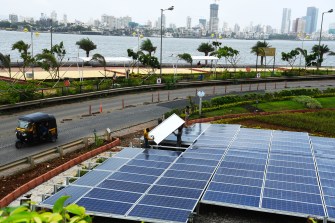 Solar panels are installed outside of Mumbai.

Transitioning to renewables across the globe

Developing countries face a particular challenge in reducing greenhouse gas emissions — their people want a decent quality of life, and the easiest way to deliver the energy that quality of life requires is through fossil fuel usage, especially coal.

When regions like the E.U. and U.S. were developing, however, renewable energy didn’t exist. Thus, reducing emissions from developing countries is feasible, although it will likely require international support. In fact, despite their on-going development, both China and India are developing their renewable energy capacity at an incredible pace — China is actually the world’s largest producer, exporter, and installer of solar panels, wind turbines, batteries, and electric vehicles. These developments are good, but more effort is needed. In order to preserve ecological diversity and avoid civil unrest in the face of climate change, both developed and developing countries will need to realize greater reductions in their emissions and a more rapid transition to renewable energy.

Hindsight is 20/20, particularly when you have had 20 years to think about what happened.
The Future

The power tower has superior physics but inferior economics.
Life

China’s dominance of the rare earth metal industry is part of its overall geopolitical strategy.
Up Next
Health