For 11 consecutive years the Nordic nation, with a population of just over 360,000, has been the frontrunner in the index, which benchmarks countries according to how close they are to reaching gender equality.

Iceland has closed almost 88% of its gender gap and increased its lead over second-ranked Norway. 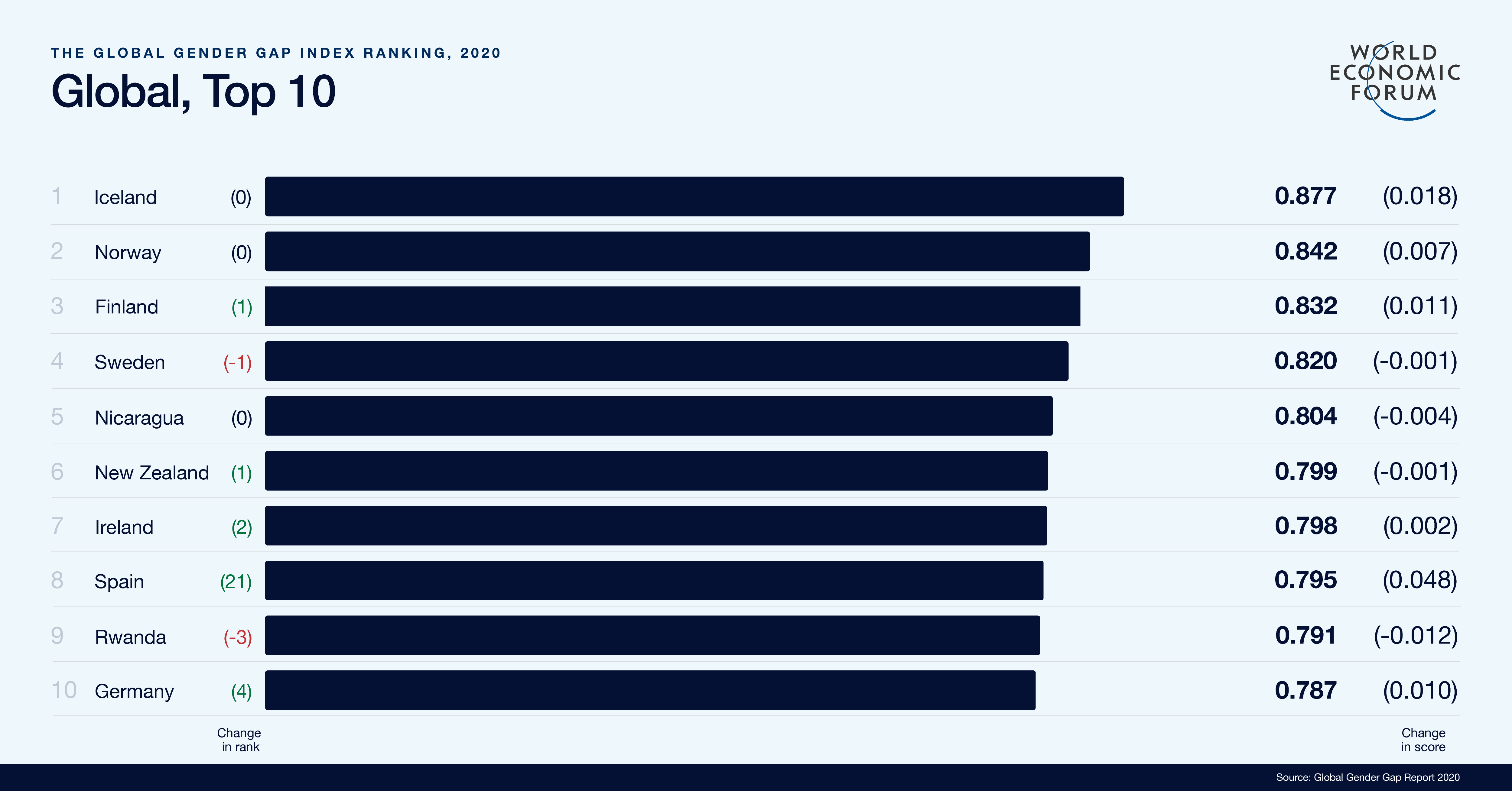 The latest figures indicate an overall positive direction of travel.

The global gender gap – which is measured across four key areas, or subindexes: health, education, work and politics – has narrowed slightly to 68.6%. The average gap left to close is now 31.4%, compared to 32% last year.

But there is still an excruciatingly long wait for gender equality: it will take 99.5 years to achieve full parity between men and women at the current rate of change.

The majority of countries made strides towards parity in the last 12 months – some moving faster than others. The 16 countries that make up the index’s top 10% recorded an improvement of more than 3.3% year-on-year.

Since the report began in 2006, Nordic countries have frequently monopolized the top spots in the ranking, and 2020 is no exception. Just below second-placed Norway are Finland and Sweden.

The most-improved countries are Albania, Ethiopia, Mali, Mexico and Spain.

The United States is 53rd this year, a fall of two places. The world’s second-largest economy, China, is down three to 106th.

Looking at the data by region, Western Europe has made the most progress in closing the gender gap, followed by North America, Latin America and the Caribbean, Eastern Europe and Central Asia, Sub-Saharan Africa, South Asia and the Middle East and North Africa.

85 of the 153 countries covered in the latest edition have never had a female head of government. Perhaps no coincidence then that five of the top 10 most gender-equal countries have women in charge.

The Social Democrat will lead a coalition of 5 parties all headed by women. Four of those women are under the age of 35. pic.twitter.com/9LWBUw7cLF
— AJ+ (@ajplus) December 10, 2019

This year’s overall improvement was mostly the result of progress in politics, as the number of women in parliaments around the world increased. Even so, only 24.7% of the gap in the Political Empowerment subindex has been bridged so far. 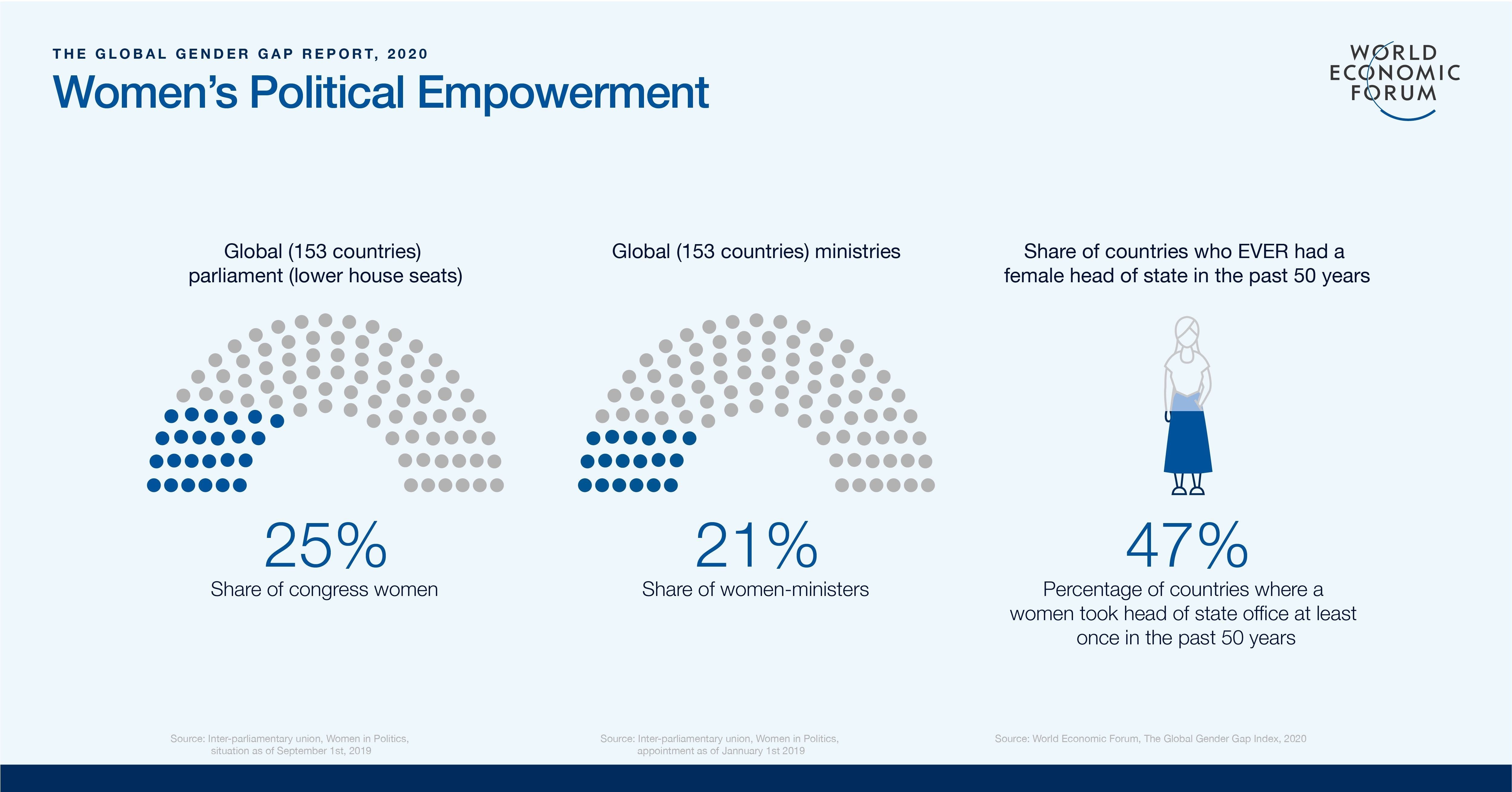 Less than a quarter of the gap as been closed. Image: World Economic Forum

There were also marginal gains in Educational Attainment and Health and Survival, both of which are nearing parity at 96.1% and 95.7%, respectively.

However, the Economic Participation and Opportunity gap widened slightly, meaning it will now take even longer to close – 257 years, compared to the previous estimate of 202 years.

Tags
feminismgendermenpoliticssocietywomen
In this article
feminismgendermenpoliticssocietywomen
Related
Putin’s war: “The single biggest geopolitical mistake since 1989”
“This is much deeper than just ‘let’s figure out how we can get both sides to get along.’”
▸
15 min
—
with
Ian Bremmer
Health
Why are people sexually attracted to cartoons? Evolution.
Nikolaas Tinbergen’s concept of “supernormal stimulus” explains why humans are attracted to a heightened version of reality.
The Past
How “gate” became the syllable of scandal
In terms of sheer productivity, “-gate” has no peer. Wikipedia’s list of -gates has over 260 entries.
How resisting conformity can lead to real world progress
Thinking as a group and going along with the loudest voices can feel easy and even natural. But to make real positive change in our world, it’s important to hear all voices and question the perceived majority.
▸
5 min
—
with
Todd Rose
10% of people are dominating social media. What if the other 90% spoke up?
Social media isn’t the majority – it’s the vocal fringe.
▸
with
Todd Rose
Up Next
The Present
Global emissions slowed down in 2019, but still reached a record high
Recent research estimates that the growth of emissions slowed down to 0.6 percent in 2019. However, this still means that humans released more CO2 into the atmosphere in 2019 than in any other year.