In 2009, the European Environment Agency made a surprising claim: If Europe were to build all of the onshore and offshore wind farms it was capable of building, wind could power the continent many times over. In fact, the 2009 report said that wind farms could provide 20 times the electricity that’s estimated to be demanded in Europe in 2020.

But it turns out the actual wind potential in Europe could be much higher. A new study found that maximizing onshore wind potential could enable Europe to generate 100 times more electricity than it currently does. That’s enough to cover energy demand for the entire world from now until 2050, according to the researchers.

The study, published in the September 2019 installment of Energy Policy, found that Europe’s untapped wind energy potential amounts to approximately 52.5 terawatts, or about 1 million watts for every 16 European citizens. To estimate the continent’s wind potential, the researchers used information detailing each nation’s infrastructure, buildings and protected areas to determine which areas wouldn’t be suitable for onshore wind farms.

They also conducted a spatial analysis to identify areas with sufficient wind conditions for wind farms. 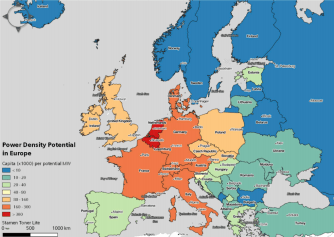 “The study is not a blueprint for development but a guide for policymakers indicating the potential of how much more can be done and where the prime opportunities exist,” study co-author Benjamin Sovacool, professor of energy policy at the University of Sussex, told the University of Sussex Media Centre. “Our study suggests that the horizon is bright for the onshore wind sector and that European aspirations for a 100 percent renewable energy grid are within our collective grasp technologically.”

The researchers admit they were “very liberal” in identifying land on which wind farms might be built; for example, they included private land where citizens might have no interest in building wind farms.

“Obviously, we are not saying that we should install turbines in all the identified sites but the study does show the huge wind power potential right across Europe which needs to be harnessed if we’re to avert a climate catastrophe,” Sovacool said.

Wind energy — not always a breeze

Wind energy isn’t completely free of problems. As Big Think wrote in July, wind is currently one of the cheapest forms of renewable energy, but there are several factors preventing it from becoming dominant in the U.S. Those include:

Still, the researchers don’t think these criticisms make their findings irrelevant. In the study, they addressed the intermittent nature of wind energy, and also acknowledged the impracticality of actually building dense wind farms on every exploitable piece of land.

“To both critics the response is the same,” they wrote. “Realizable wind power potential studies are not to be treated as blueprints for development. Such studies help policymakers understand what is possible as a ceiling, help planners target areas of particular attraction, and help us understand where we are in terms of state of play concerning a given technology and its potential. For onshore wind power potential, our study suggests that still the horizon is bright for this particular application in the wind energy sector and that European aspirations for a 100 percent renewable energy grid are within our collective grasp technologically.”

Tags
climate changerenewable electricitywind energy
In this article
climate changerenewable electricitywind energy
Related
Hard Science
Wandering icebergs could trigger tsunamis
Icebergs aren’t just a threat to unsinkable ships. Their ability to cause underwater landslides poses a danger to coastal cities.
The Past
Busting the Easter Island myth: there was no civilization collapse
For decades, researchers have proposed that climate change and human-caused environmental destruction led to demographic collapse on Easter Island. That’s probably false, according to new research.
Hard Science
New research finds that reforesting Europe would increase rainfall, fighting a drying trend
Trees store carbon dioxide, have a cooling effect in cities, and reduce flood risks.
The Future
Say goodbye to air conditioning with new roofing material
The guilt-free air conditioning, called “cooling paper,” is made from recyclable paper and doesn’t use any electricity.
The Present
57% of U.S. structures lie within a natural “hazard hotspot”
A new study mapped areas of the U.S. that are most likely to suffer natural disasters.
Up Next
Health
New vaccine (for cats) nixes allergic reactions for humans
You want one. Now you may be able to survive one.