Many cat lovers struggle with cat allergies that range from sniffles and runny noses to more severe reaction reactions that can send a felinophile racing to the ER.

For some, anti-allergy medications suffice, though they’re not without side effects — others just suffer the symptoms in exchange for the privilege of having a cat in their families. (Certainly their cats consider it a privilege.) Some people simply stay away from cats.

This is may all soon change, though. This month, researchers in Zürich published preclinical data in The Journal of Allergy and Clinical Immunology that offers a different type of solution: a vaccination. Not for you. For the cat. 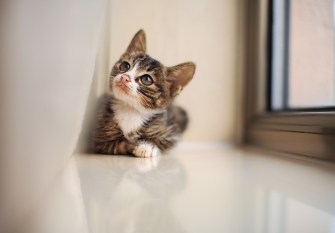 Fel-CuMVTT, to be marketed as HypoCat™ vaccine by Swiss company HypoPet, was developed through a collaboration between researchers at the Latvian Biomedical Research and Study Centre, in Riga, and the veterinary school at the University of Zürich — along with scientists at the Functional Genomics Center Zürich. 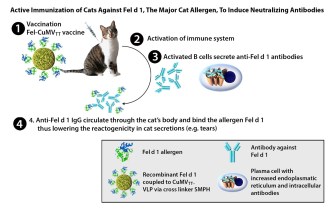 Image source: The Journal of Allergy and Clinical Immunology

How the vaccine works

The vaccine brings together recombinant Fel d 1 with a virus-like particle (or “VLP“) derived from the cucumber mosaic virus. “We are very pleased to publish this data which shows our HypoCat™ vaccine is able to produce high levels of antibodies in cats and that these antibodies can bind and neutralize the Fel d 1 allergen produced by the animals,” says Dr. Gary Jennings, HypoPet CEO.

Cats treated with the vaccine were found to be less likely to trigger allergic reactions in humans exposed to them. The vaccine is also reported to have been “well tolerated without any overt toxicity” for the feline test subjects. The published data is culled from four separate studies that involved 54 cats. 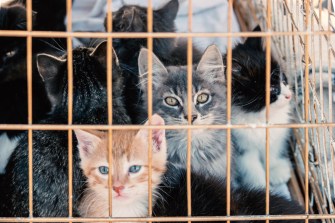 The benefits of an effective cat-allergy treatment are two-fold. First off, these allergies are not only annoying — and sometimes much more than that — but a cat allergy in kids living with felines is understood to be a strong factor in the development of childhood asthma. A simple three-dose course of vaccine — as administered in the testing — could alleviate cat-owners’ suffering and the risk to young ones.

Households with allergy sufferers, especially children, often find themselves forced to evict a beloved family member, a traumatic experience for all concerned, and a leading cause of cat abandonment. According to HypoCat, U.S. shelters take in 3.4 million cats annually — 1.4 million of these are eventually euthanized.

The paper-thin device may also someday be used to stimulate bone growth.
Up Next
The Present

A group representing more than 100 of the biggest corporations in the U.S. has released a statement updating its definition of the purpose of American corporations.