Poisoned tap water in Flint, Michigan. Toxic waste dumps in the Lower Rio Grande Valley. A town in China where 80% of children have been poisoned by old computer parts. What do these things have in common?

All are examples of environmental racism, a form of systemic racism whereby communities of colour are disproportionately burdened with health hazards through policies and practices that force them to live in proximity to sources of toxic waste such as sewage works, mines, landfills, power stations, major roads and emitters of airborne particulate matter. As a result, these communities suffer greater rates of health problems attendant on hazardous pollutants.

It was African American civil rights leader Benjamin Chavis who coined the term “environmental racism” in 1982, describing it as “racial discrimination in environmental policy-making, the enforcement of regulations and laws, the deliberate targeting of communities of colour for toxic waste facilities, the official sanctioning of the life-threatening presence of poisons and pollutants in our communities, and the history of excluding people of colour from leadership of the ecology movements”.

In practice, environmental racism can take many forms, from workplaces with unsound health regulations to the siting of coal-fired power stations close to predominantly non-white communities. It can mean citizens drinking contaminated groundwater or being schooled in decaying buildings with asbestos problems.

Many of these problems face low-income communities as a whole, but race is often a more reliable indicator of proximity to pollution. A landmark 2007 study by academic Dr Robert Bullard – the “father of environmental justice” – found “race to be more important than socioeconomic status in predicting the location of the nation’s commercial hazardous waste facilities”. He proved that African American children were five times more likely to have lead poisoning from proximity to waste than Caucasian children, while even black Americans making $50-60,000 a year were more likely to live in polluted areas than their white counterparts making $10,000. In the UK meanwhile, a government report found that black British children are exposed to up to 30% more air pollution than white children. 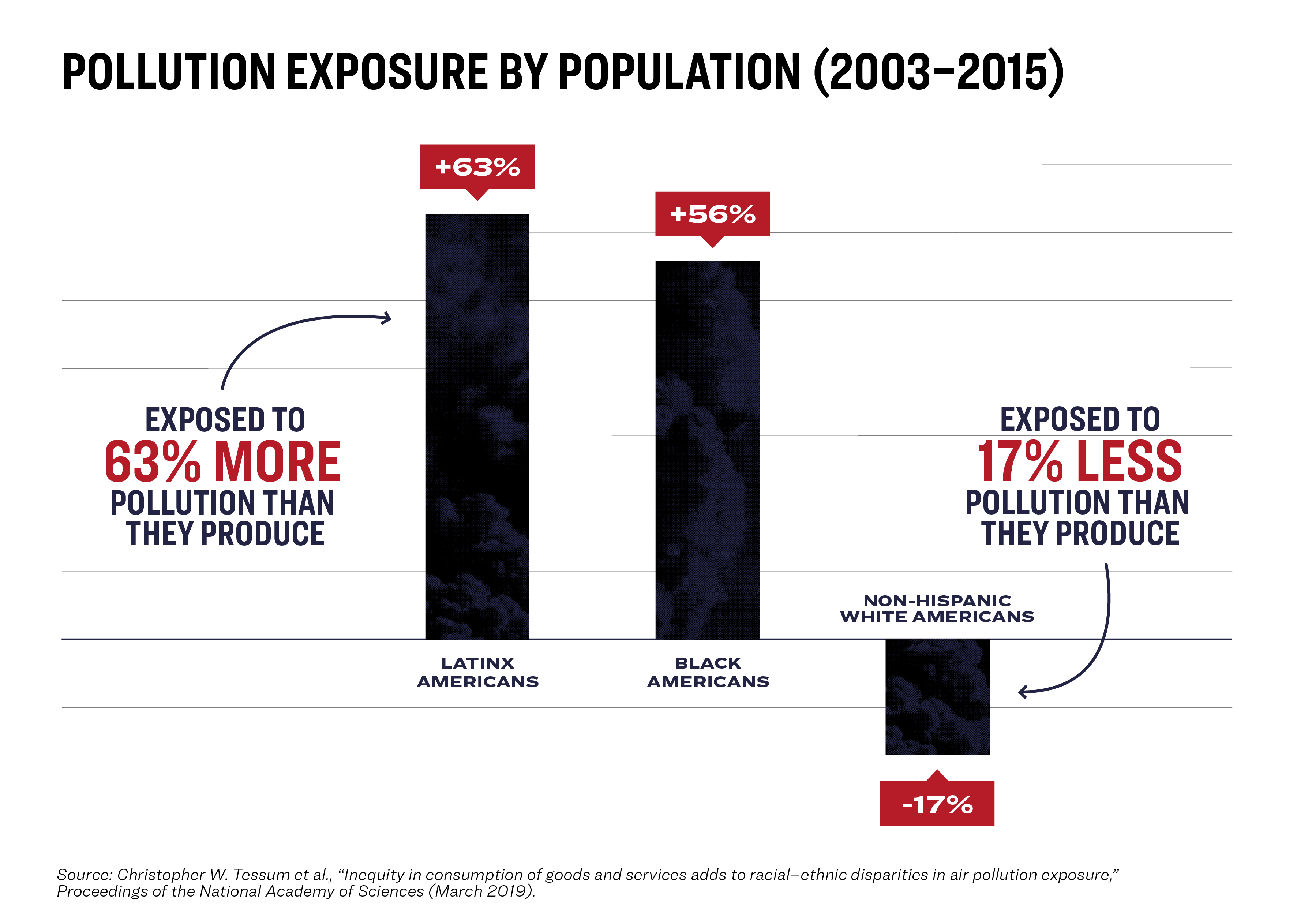 Exposure to air pollution among populations in the US. Image: Elizabethwarren.com

The case of Flint, Michigan, is a prime example of environmental racism. In 2014, to save money, the city changed its water source to the Flint river, but failed to treat the new supply adequately, exposing the city’s 100,000 majority-black inhabitants to dangerous levels of lead from ageing pipes and other contaminants such as E.coli. Between 6,000 and 12,000 children drank tap water containing high levels of lead, a neurotoxin, while 12 citizens eventually died from Legionnaires’ disease. However, for 18 months, residents’ complaints of foul-smelling and discoloured water, of hair loss and skin rashes, were dismissed until community pressure forced the city to reconnect to the former supply and admit wrongdoing. The Michigan Civil Rights Commission concluded that the slow official reaction was a “result of systemic racism”.

Indigenous populations often suffer from environmental racism. In the US, Native Americans communities continue to be subjected to large amounts of nuclear and other hazardous waste, as corporations take advantage of weaker land laws, whereby the federal government holds land in “trust” on behalf of the tribes. Decades of uranium mining on the land of the Navajo of New Mexico have caused longstanding problems in the community. From 1951 until 1971, the US Public Health Service performed a massive human medical experiment on 4,000 Navajo uranium miners, allowing them to work without informing them of the effects of radiation. The effects were predictable: elevated levels of lung cancer and other diseases from breathing in radon.

The 2016-17 protests against the Dakota Access Pipeline were another example where the tribes came up against the power of policy and lost. The 1,172-mile oil pipeline was considered a threat to the Standing Rock Indian Reservation’s water supply, as well as sites of historic importance and culturally sensitive burial grounds. Though unsuccessful, the protests caught the public imagination, drawing solidarity marches and support from Bernie Sanders. All too often however, environmental racism occurs because communities lack the resources to raise awareness or fight a costly legal battle – resources which are available to wealthier white communities, who are better able to divert airport expansions, power stations or landfills elsewhere in a process known as NIMBYism – standing for “not in my backyard”.

Globalization has increased the opportunity for environmental racism on an international scale. It refers to the dumping of pollutants such as e-waste on the global south, where safety laws and environmental practices are more lax. More than 44 million tonnes of e-waste was generated globally in 2017 – 6kg for every person on the planet – and of that, each year around 80% is exported to Asia. One e-waste hub is the town of Guiyu in China, where heaps of discarded computer parts piled by the river contaminate the water supply with cadmium, copper and lead. Water samples showed lead levels 190 times higher than WHO limits. Even a slight increase in lead levels, meanwhile, can affect IQ and academic performance in children. Other examples include the mass shipment of spent American batteries to Mexico, where illegal waste dumps from plants operated by American, European and Japanese companies have resulted in soaring rates of anencephaly (when babies are born without brains).

So what is being done? The environmental justice movement works to raise awareness of the plights of vulnerable populations through academic studies, media pressure campaigns and public activism. Grassroots movements make use of social media, along with civil disobedience and marches, to make their views heard. The European Union, where most documented cases of environmental racism affect the Romani people, has funded initiatives including the Environmental Justice Organisations, Liabilities and Trade project, which ran from 2011-2015 and brought together scientists and policy-makers from 20 countries across the world to advance the case of environmental justice. As environmental laws tighten in developed countries however, many fear that dumping activities will shift towards the global south.

Combating environmental racism may risk falling down the policy in the age of COVID-19 – and yet with non-white people more likely to die from the virus, the higher instances of complicating factors such as asthma and heart disease brought about by exposure to pollution are likely to play a part. Environmental racism is part of the broader picture of systemic racism, which must be fought to bring about a fairer society.

Tags
communityenvironmentglobal issuesracesocietysustainability
In this article
communityenvironmentglobal issuesracesocietysustainability
Related
The Present
The “maritime Indiana Jones” who salvages shipwrecks now wants to tow icebergs
Simple physics makes hauling vast ice chunks thousands of miles fiendishly difficult — but not impossible.
Life
Strange life forms create an “alien” ecosystem in an abandoned uranium mine
Slimy biofilms made up of bacterial and eukaryotic life forms have taken over an abandoned, flooded uranium mine in Germany.
The Present
Climate change is altering the chemistry of wine
Smoke taint from wildfires is gross, even to wine amateurs.
Life
Our antidepressant drugs are affecting animals and ecosystems
A toxicologist explains the impacts of antidepressants on fish — and no, they’re not getting any happier.
Hard Science
200 years of exploring Antarctica
What we’ve learning from the world’s coldest, most forbidding, and most peaceful continent.
Up Next
Neuropsych
No, opposites do not attract
The problem is that what’s true of magnets is not at all true of romance.