The amount of effort that we spend digging up ancient plankton is starting to get more and more ridiculous. There’s energy all around us that we can easily collect from the sun, wind, rivers, waves — and now from snow, too. Indeed, Maher El-Kady and Richard Kaner, two scientists from UCLA, recently published a paper in Nano Energy describing how they were able to construct a cheap, flexible, simple device — they call it the “snow-TENG” — that can generate electricity from falling snow. 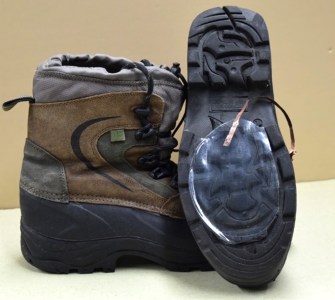 snow-TENG is shown attached to the sole of a boot. In this use case, an individual walking across a snowy field could generate electricity for wearable devices or use snow-TENG to count their steps.

H2O is a polar molecule, meaning that one of its sides is negatively charged (specifically, the side with the oxygen atom) and the other is positively charged (the side with the two hydrogen atoms). When water molecules crystalize into snowflakes, they orient themselves such that the snowflake gets an overall charge. Friction, too, can confer an electrical charge to snowflakes.

“Snow is already charged,” said El-Kady in a UCLA statement, “so we thought, why not bring another material with the opposite charge and extract the charge to create electricity?” Materials like this are called triboelectric nanogenerators (or TENGs), named after the triboelectric effect, in which a material picks up the charge of another material through contact. For example, rubbing your hair on a balloon strips electrons off of your hair and onto the balloon, causing your positively charged hair to reach out towards the now-negatively charged balloon in pursuit of its stolen electrons — also known as static electricity.

“After testing a large number of materials including aluminum foils and Teflon, we found that silicone produces more charge than any other material,” said El-Kady.

What can it be used for?

There are a significant number of potential applications for a device like this. It could, for instance, be attached to solar panels to provide energy when the sun is blocked by a snowstorm. It could be used to track the performance of cold-weather athletes, power small wearable devices, or a portable weather station. In addition, it could be coming to a neighborhood near you. “We believe our materials can be painted onto buildings to create electricity, and also provide protection against water and humidity,” El-Kady told Popular Science.

One of the more impressive uses for snow-TENG is, of course, as a battery-free weather station. When particles of snow strike the device, it generates a variety of electrical signals that can be interpreted to determine the wind speed and direction in a snowstorm as well as the snowfall rate and accumulation.

During the wintertime, up to a third of the planet becomes covered in snow, making devices like snow-TENG much more practical than they may initially sound. But, of course, one has to wonder how practical such a device will be in a future dominated by climate change. However, while many places will see less snow, climate change may actual increase snow fall in others, particularly in colder climates.

While free energy is always nice, it’s important to stress that the snow-TENG is more of a proof of concept than a revolutionizing piece of new tech. During their tests, El-Kady and Kaner found that the device could output 0.2 milliwatts per square meter. As a comparison, a solar panel that’s exactly one square meter could generate around 150 to 200 watts in good sunlight.

However, the device already works as a self-powered sensor of movement and weather, and the technology can likely be improved to generate more electricity. All told, snow-TENG demonstrates how much energy there is hiding in the background of our everyday environment.

A “bio-battery” made from genetically engineered bacteria could store excess renewable energy and release it as needed.
Hard Science

It has no moving parts and could allow us to tap into renewable energy year round.
Up Next
Starts With A Bang

Cosmic Rays Are More Energetic Than LHC Particles, And This Faster-Than-Light Trick Reveals Them

Cosmic rays, which are ultra-high energy particles originating from all over the Universe, strike protons in the upper atmosphere and produce showers of new particles. The fast-moving charged particles also […]