For all of its promise, solar energy depends on the capture of light, and the more the better. For residents of sunny climes, that’s great, with rooftop collection panels, and solar farms built by utilities in wide open, sunny spaces that can provide power to the rest of us. Now, though, a team of scientists at the National University of Singapore (NUS) has announced success at deriving energy from…shadows.

We’ve got plenty of them everywhere. “Shadows are omnipresent, and we often take them for granted,” says research team leader Tan Swee Ching, who notes how shadows are usually anathema for energy collection. “In conventional photovoltaic or optoelectronic applications where a steady source of light is used to power devices, the presence of shadows is undesirable, since it degrades the performance of devices.” His team has come up with something quite different, and Tan claims of their shadow-effect energy generator (SEG) that, “This novel concept of harvesting energy in the presence of shadows is unprecedented.”

The research is published in the journal Energy & Environmental Science. 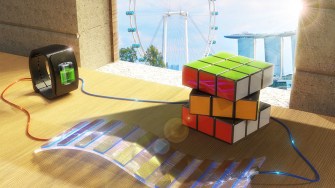 The energy produced by the SEG is generated from the differential between shadowed and lit areas. “In this work,” says Tan. “We capitalized on the illumination contrast caused by shadows as an indirect source of power. The contrast in illumination induces a voltage difference between the shadow and illuminated sections, resulting in an electric current.”

SEG cells are less expensive to produce than solar cells. Each SEG cell is a thin film of gold on a silicon wafer, and an entire system is a set of four of these cells arrayed on a flexible, transparent plastic film. Experiments suggest the system, in use, is twice as efficient as commercial solar cells.

An SEG cell’s shadow effect works best when it is half in light and half in shadow, “as this gives enough area for charge generation and collection respectively,” says co-team leader Andrew Wee. When the SEG is entirely in shadow or in light, it doesn’t produce a charge. 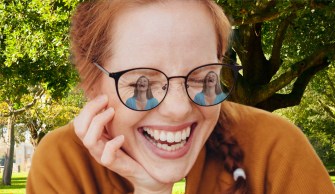 To be sure, the amount of energy that NUS researchers have thus far extracted is small, but it’s enough to power a digital watch. The researchers envision the SEG system harvesting ambient light to power smart phones and AR glasses that are used both outdoors and indoors. While such devices can run on solar batteries, solar is only replenished outdoors, and the SEG could “scavenge energy from both illumination and shadows associated with low light intensities to maximize the efficiency of energy harvesting,” says Tan. It seems clear that we’re on the cusp of the era of wearables — AR visionwear, smart fabrics, smart watches, and so on — and so Tan considers the arrival of the SEG “exciting and timely.”

The researchers also note an additional application for which the SEG seems a natural: It can function as a self-powered sensor for monitoring moving objects. The shadow caused by a passing object would trigger the SEG sensor, which can then record the event.

Next up for the team is investigating constructing cells using other, less costly materials than gold to make them even less expensive to produce.

They are expected to be cheaper to build and even more reliable than today’s nuclear plants.
Hard Science

Short-hop regional flights could be running on batteries in a few years.
Up Next
Starts With A Bang

4 Ways That Scientists And Academics Can Effectively Combat Racism

It’s not only about what’s happening right now. Things need to change for good.It could be your colleague, your coworker, your staff member, or your student. As the world mourns the […]