Although I risk impinging on the territory of fellow Big Think blogger Marina Adshade of Dollars and Sex, I can’t help but comment on a recent report in The Guardian titled “When art breeds success in the bedroom.”

In the article, Marc Abrahams, the editor of the Annals of Improbable Research and chief organizer of the humorous and thought-provoking Ig Nobel prize, chronicles how he stumbled across an article in the Frontiers of Psychology titled “Status and Mating Success Amongst Visual Artists.” In the piece, a trio of U.K.-based researchers — Helen Clegg, Daniel Nettle, and Dorothy Miell — argue that successful male artists have a lot of sex, whereas less successful male artists have less.

When you talk about female artists, however, success means pretty much nothing at all when it came to their sex life. At the risk of going against their findings (and of sounding like Carrie from Sex and the City), is it really true that great male artists have greater sex?

Clegg, Nettle, and Miell describe their study sample as 236 heterosexual artists (85 men and 151 women) ranging 18 to 78 years of age (mean age, 42.67 years) and 91 percent of which hailed from “a white Western background.” The artists in question volunteered via online questionnaire and self-reported both their studio and bedroom prowess — easy areas for bragging.

You can look at the full article here if you wish to brave the statistical jungle, but suffice it to say, as Abrahams helpfully explains, the researchers wielded “a tool that mathematicians count among the sexiest of mankind’s inventions… The logarithm.” Said logarithm helped neutralize those over- and under-reporting their numbers. 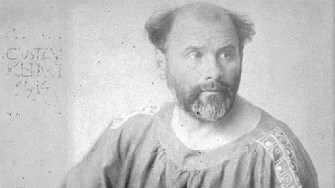 The one and only Gustav Klimt.

I don’t think that you can argue with the idea that great artists have great (if by “great,” you mean prolific) love lives. If “chicks dig the long ball” in baseball and Wilt Chamberlain of basketball fame slept with (as he claimed) 20,000 women, it only stands to reason that makers of masterpieces were also on the make.

Picasso changed mistresses and wives as frequently as he changed painting styles. When the fine ladies of Viennese society ventured into the studio of Gustav Klimt (shown above) for their portrait, it was almost expected of them to have an affair with the artist himself, who allegedly kept a supply of naked models strewn about to inspire his art and simultaneously stoke his libido.

The idea that a nude female model naturally transitioned from muse to mistress stretches back to the earliest days of painting and lives on today, at least in the public imagination.

What I take issue with is the idea that female artists can’t enjoy the same “fruits” of their labor. If creativity makes a man more attractive to a woman, how can that same creativity fail to make a woman less attractive to a man? Lee Miller‘s killer combo of drop-dead beauty and hard-edged creativity won over Man Ray, virtually the entire male side of Surrealism, and even Picasso himself, although her sexual activity may have been hampered by Ray’s obsessive possessiveness. Frida Kahlo suffered during her marriage from Diego Rivera‘s philandering, but she had her share of sex on the side — both with men and women — including sculptor Isamu Noguchi, dancer Josephine Baker, and political revolutionary Leon Trotsky.

Kahlo’s pure charisma, both in her art and in the artful persona she crafted, drew people to her in an intimate way that few men could match. Even a lesser-known female artist, such as Suzanne Valadon, could cut a sexual swath through the male population of an art period. After a fall from a trapeze ended her circus career, Valadon turned to modeling, eventually posing (and in many cases mistressing) for artists such as Toulouse-Lautrec, Renoir, Puvis de Chavannes, and Degas. Along the way, she learned the painting trade from her famous friends and lovers. When she gave birth to a son in 1883, the identity of the father hung in the air — which great artist was the dad?

When Miguel Utrillo y Morlius stepped forward as the father, the joke (as told by Diego Rivera) went that Utrillo didn’t mind signing his name to a creation by Renoir or Degas. That son became Maurice Utrillo, a fine artist troubled by alcoholism and mental illness.

Do great artists have more sex? Probably. Do women artists have less sex? Maybe. Or maybe they’re still conditioned by society to keep it a secret. But as Wilt Chamberlain later said after making his six-digit boast, making love to the same woman 20,000 times is greater than making love to 20,000 women once. If artistic greatness is an elusive thing to measure, scientifically labeling sexual creativity can be just as, if not more, slippery.

Related
13.8
Why the origin of life and the Universe itself might be forever unknowable
There might be a hard limit to our knowledge of the Universe.
Hard Science
200 years of exploring Antarctica
What we’ve learning from the world’s coldest, most forbidding, and most peaceful continent.
Sponsored
4 misleading personal finance tips
Personal finance advice is often over-simplified and fails to consider economic research or people’s unique circumstances.
Strange Maps
Europe’s stunning digital divide, in one map
Some Europeans really don’t want to use the internet.
Thinking
Bonhoeffer’s “theory of stupidity”: We have more to fear from stupid people than evil ones
Evil is easy to identify and fight against; not so with stupidity.
Up Next
Surprising Science
The Bright Side of Narcissism
CEOs who “crave acclaim and applause” are more likely to get ahead when it comes to innovation, says a new research study from a top business school in Switzerland.