Black students have been systematically excluded from U.S. physics and astronomy bachelor’s programs. Now, broad, fundamental changes are being recommended to combat challenges that bar rich and diverse talent from America’s science fields.

A new report funded by the American Institute of Physics (AIP), a non-profit organization that publishes scientific journals and advocates for physics, calls for doubling the number of undergrad degrees awarded to black students in physics and astronomy in the next ten years.

Black underrepresentation in the sciences

In the last 25 years, the total number of bachelor’s degrees earned in the United States has shot up from 1.1 million to 2.1 million. The number earned across all fields by African Americans has more than doubled, going from 85,856 to 193,567. Yet, in physics and astronomy, this has not been proportional. While the number of undergraduate degrees earned in those fields has surged, according to research from the Statistical Research Center at the American Institute of Physics (AIP), only 4% are received by black students. In 2018, black students earned a total of 223 degrees in physics and just 10 in astronomy. Obviously, black students have the same levels of ambition, intellect, and talent to obtain those degrees as any other group. So what’s going on?

A two-year investigation by the AIP’s National Task Force to Elevate African American Representation in Undergraduate Physics and Astronomy (TEAM-UP) discovered that two big challenges contributed to the perpetual underrepresentation of black students in the fields of physics and astronomy. One was a less-than supportive environment in the departments, and the other was systemic personal financial challenges faced at higher rates by black students.

The investigation included recommendations from student and faculty surveys, interviews with black students and department chairs, and visits to physics department sites. Drawing on those findings, the report lays out recommendations to facilitate the sweeping cultural changes necessary to increase black representation in physics and astronomy. The TEAM-UP goal is to at least double the number of African Americans who earn bachelor’s degrees in those fields by 2030.

“The physics community is looking very deeply at itself,” Shirley Malcom, a senior adviser at the American Association for the Advancement of Science, said to Physics Today. “We were born into a society that tends not to value black people. Let’s get over that and change behaviors that keep African Americans from thriving in our colleges and universities and contributing to the advancement of physics.” 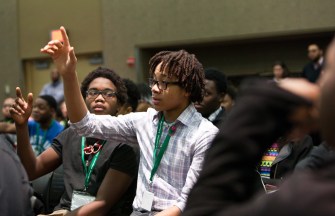 The College of DuPage hosted a Black Student Leadership Conference in 2016.

Fostering a sense of belonging

According to the report, physics and astronomy departments can foster a sense of belonging for black students by promoting values of inclusion and by ensuring black students that they are valued and expected to succeed. The report suggests that departments take extra steps to ensure that black students feel comfortable in ‘common areas’ and are encouraged to take on leadership positions on campus. It also advises that faculty members adopt methods to combat racist behavior and more subtle microaggressions toward black students.

The report also outlined recommendations for alleviating financial burdens for black students. In 2016, the median income of white families ($171,000) was 10 times that of black families ($17,600). As a result, black students disproportionately end up having to juggle financial or medical stresses while in school. To address these strains, TEAM-UP calls for the creation of a $50-million fund that would support marginalized students in physics and astronomy. Half of that value would be used to directly support at least 150 minority physics and astronomy students. Each student would receive around $8,000 to help pay for their education. The rest would be used to help departments implement campus resources like counseling, extra lecturers, and new programs.

The importance of cultural diversity

This latest report follows a growing call for science to diversify. Last year, the American Astronomical Society (AAS) made a call to doctoral programs in the field to work harder to recruit and retain students from minority groups like women, marginalized ethnic groups, people with disabilities, and those from sexual and gender minorities. Also last year, the American Geophysical Union (AGU) launched a program to boost the representation of black, Native American, and hispanic graduate students in some Earth and space science departments.

This cultural shift has been long overdue, and it will almost certainly shake-up science for the better. Diverse backgrounds lend fresh perspectives to fields of research. Scientific discoveries and knowledge — the research questions asked, the applications of research findings, and even sets of data, like the groups studied — can not be disentangled from the cultural background and experiences of those who are doing the research. For centuries, white men have dominated science and thus produced the knowledge that has made up our construction of the world. Now, that’s finally changing.

Tags
astronomydiversityeducationphysicsracesciencesocial change
In this article
astronomydiversityeducationphysicsracesciencesocial change
Related
The Well
This is what the fourth dimension looks like
Left–Right, Back–Forth, Up–Down. What’s the fourth dimension?
▸
3 min
—
with
Brian Greene
The Learning Curve
The art of asking the right questions
The right questions are those sparked from the joy of discovery.
Thinking
How the liberal arts can save higher education
Computerized, job-focused learning undercuts the true value of higher education. Liberal arts should be our model for the future.
Thinking
Boys are graded more harshly than girls. Why?
Education has a global bias against boys.
The physics of entropy and the origin of life
How did complex systems emerge from chaos? Physicist Sean Carroll explains.
▸
6 min
—
with
Sean Carroll
Up Next
High Culture
People aren’t reading less. In fact, literature has never been so interactive.
A new study at the University of Basel shows how interactive literature has become.