Fyodor Dostoevsky is considered one of the world’s literary greats. Notes From the Underground, his 1864 novella, is an early classic of existentialist writing. The literacy rate in Russia during the 19th century was around 24 percent, yet Dostoevsky and his contemporary, Leo Tolstoy, were known for writing dense novels. Tolstoy penned the 1,225-page epic War and Peace for a public in which most of the citizens could not read.

There has likely never been a time when writers didn’t fret over the lack of participation in their craft. Literature, an extension of accounting (written language was invented to represent animals and grain so that farmers could keep stock of what was owed), had quite turbulent beginnings. Just as population control began with resource management, mind control commenced with religious figures claiming only they could translate sacred texts. The art of reading was purposefully limited to the few.

Over time, societies understood that a literate society is an intellectually competitive one. The high art of metaphysical speculation and social codes soon gave way to gossipy stories and pulp fiction as more people learned to read. More importantly, writing, whether on papyrus sheaves or lined paper, became an essential communication tool. Then we evolved to digital screens and once again writers freaked out over lack of participation.

For a while, at least. In 2018, a whopping 675 million print books were sold in the United States. Digital books took a hit that year, losing $29 million in revenue from 2017. Books, however, are not the only way that readers consume content. A new study, conducted at the University of Basel and published in PLOS ONE, claims that literature is not only alive and well, but growing—just in ways that we have not previously experienced.

The authors cite the supposed lack of “deep reading” by younger generations. As they phrase it, “The end of deep reading is a commonplace in public debates, whenever societies talk about youth, books, and the digital age.” Deep reading is required when one sits down to read War and Peace and wants to comment intelligently on its themes. Their study is, in many ways, a response to this claim. In a social-media-dominated world, it appears that we prefer quick bites, images, and video over the contemplative introspection that comes from long-form literature, but their research suggests that’s simply not the case.

The impact of digital “social reading” is changing how we read and respond to literature. Not only can publishers and writers track how books are being read, but readers can also now respond in real-time to the texts on digital platforms and websites. This offers authors immediate feedback as to how their words are landing. E.L. James, author of Fifty Shades of Grey, began her series as a fan-fiction response to Twilight. It soon took on a life of its own thanks to her active participation on such a platform.

Studying the user-generated platform Wattpad, lead author and University of Basel professor Gerhard Lauer and his team discovered that 80 million mostly young readers and writers from around the world exchange over 100,000 stories written in over 50 languages every day. They note that “there will soon be more books in computers and digital shelves than in our material literary collections.” That’s quite an impressive amount of literature being traded and discussed.

Lauer and his co-authors used network analysis and sentiment analysis to discover patterns in reading behavior on Wattpad. Teen Fiction predominantly invoked affective interaction in readers. Commenters were more likely to discuss how they felt about the text. When reading Classics, however, social-cognitive interaction became the prevalent theme. In this case, readers put on their analytical caps more often when discussing themes in literature. The authors write:

“Readers who engage in Teen Fiction learn to read Classics and to judge books not only in direct emotional response to character’s behavior, but focusing more on contextualized interpretation of the text.” 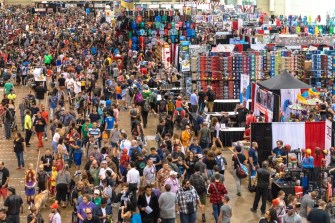 On Wattpad, the researchers observed specific sentences that drew hundreds of comments. They were then able to see which sentences and ideas spun off into other stories. This trend harkens back to oral storytelling, when griots and corrido singers traveled from town to town to share the news of the day. As with the childhood game, Telephone, those messages were reinterpreted and remixed, taking on a life of their own. This is how religion was born and spread throughout our species.

Professor Lauer says this represents the first time that reading behavior has been analyzed in real time.

“Social media is ushering in a revolution in our understanding of culture. Platforms such as Wattpad, Spotify and Netflix enable culture to be understood in a density and accuracy that goes way beyond previous approaches in the humanities and social sciences.”

The emotional and intellectual impact of storytelling remains an essential feature of our species. Print books might soon go the way of dinosaurs, but then again as recent years have proven, they could make a resurgence the way vinyl records have. As much as we love cracking open a new hardcover or flipping through a century-old classic, though, there is no potential for immediate feedback and commentary on paper.

When I’m working out in the gym or walking the streets of Los Angeles, streaming music delivered via Bluetooth works incredibly well. In my living room I prefer my the warm sounds of acetate spinning around in a circle. Reading also takes on many forms to represent the different environments we find ourselves in. The one clear message from this study is that we’re still reading. Yes, the kids are alright.

Non-Western thought is vast and ancient, so why don’t some consider it philosophy?
High Culture

People around the world, mostly Generation Z, are obsessed with the look and feel of gothic, elitist universities. Why?
Thinking

Pokémon has people wandering the world to enslave wild and magical creatures so they can fight in painful blood sports. What’s fun about that?
Up Next
Starts With A Bang

This image, focusing on the central few degrees of the Milky Way in infrared light, is the culmination of years of observations taken with the ESO’s VISTA instrument, the world’s […]