You’ve probably noticed that our appetite for storing data is ravenous. Just three or four years ago, we thought a terabyte of storage space was ridiculously capacious. Now, multi-terabyte storage is an everyday thing. And it’s not just the data we want to stash away that we’re having trouble handling. It’s also the bits coursing through our processors and the power those straining processors require. We’re reaching the limits of our hardware, so only a breakthrough in efficiency that packs data into a much tinier form than it currently inhabits could break through the wall we’ve been rapidly approaching.

Consider this. The essential smallest building block of data is a binary bit, a simple two-way switch set to either 0 or 1. (Eight bits equal a byte, and strings of bytes represent some mathematical value or other.) The smallest physical thing in the universe is the atom. Could we possibly store a bit on an atom? Scientists from the Radboud University in the Netherlands have just published research that presents how it can be done.

“Computers have reached fundamental limitations as to how much better they can get, creating a huge demand in materials research for alternatives. Modern computers use a lot of electricity, currently demanding more than 5 percent of the world’s electricity. Fundamental science says we can gain a lot more in energy efficiency. We are focusing on a very basic component of modern computers: a bit of memory. We use atoms, because they are the smallest unit of matter and also enable us to further understand the fundamental science behind their behavior. Our current question: how can we store information within a single atom and how stable can we make that piece of information?” — Brian Kiraly, first author of the new research 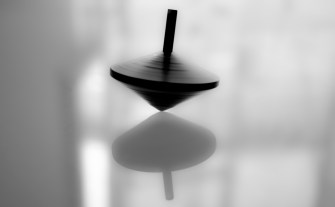 The battle against constant spinning

An especially vexing problem is coercing single atoms into resting in a binary — 0 or 1 — state, because atoms want to spin. “What defines a permanent magnet is that it has a north and a south pole, which remains in the same orientation”, according to co-author Alexander Khajetoorians, “But when you get down to a single atom, the north and south pole of the atom start to flip and do not know what direction they should point, as they become extremely sensitive to their surroundings. If you want a magnetic atom to hold information, it cannot flip.”

The electrons in a magnetized atom orbit its nucleus. They also spin on their own axes, much like the Earth spins as it orbits around the sun. The rate at which they spin is called their “spin angular momentum” and it produces the atom’s magnetic charge. Electrons that share a similar spin angle momentum travel together around the nucleus in bands, called “orbitals.” The further away they are from nucleus, the higher the electrons’ spin angular momentum and the greater the charge each orbital produces. The speed at which each orbital group goes around the nucleus is called its “orbital angular momentum.”

Previous efforts to use magnetized atoms as storage have focused on the spin angular momentum, such as the Swiss team from Ecole Polytechnique Federale de Lausanne who announced in early September that over the last couple of years they’d gotten magnetized atoms of holmium to stay put, but only in extreme cold up to 45 Kelvin. (That’s a chilling -233.15 Celsius, though it counts as hot to atoms.)

The Radboud researchers took another tack. “Instead of this spin angular momentum, which previous researchers have used, we figured out a way to make an energy difference between a few of the orbitals of the cobalt atom and now use the orbital angular momentum for our atomic memory” says Khajetoorians. “This has a much bigger energy barrier and might be viable to make the single atom memory stable at room temperature.”

“When we first conducted the experiment and saw this binary switching, we weren’t sure what was going on,” recalls Khajetoorians. “In a beautiful collaboration with theorists from Radboud University, Misha Katsnelson and Sasha Rudenko, we were able to point out that we were observing the atom’s orbital moment and had created a new memory [medium].” It’s still a magnet with spinning electrons, but now with an observable binary switch: Its orbitals.

There’s no hardware yet that can take advantage of the researchers’ findings. Still, it’s exciting. As Khajetoorians concludes, “What this work means is that, if we could construct a real hard drive from all these atoms — and we are still a long way from that — you could store thousands of times more information.”

If you put very fine black powder powder in a confined space it explodes in a cloud of heat, gas and noise.
The Future

Steel tires may be better for the planet and could replace rubber.
Hard Science

On Nov. 15, 2021, U.S. officials announced that they had detected a dangerous new debris field in orbit near Earth. Later in the day, it was confirmed that Russia had […]
The Future

A report from MIT outlines a six-point plan to usher in a new age of nuclear power.
Up Next
Hard Science