How well did your country respond to the pandemic?

It’s a subjective question, the answers to which are reflected in new research recording the diversity of opinion around the world.

Spoiler alert: globally, more people approved of their own country’s response than disapproved.

A Pew Research Center survey of more than 14,000 adults across 14 advanced economies in Europe, Asia, North America and Australia, found 73% thought their own country had done a good job of tackling the coronavirus outbreak.

It’s a matter of trust

Respondents’ attitude to their own country’s pandemic response – and its impact on national unity – were linked to feelings of trust in others, the survey found. 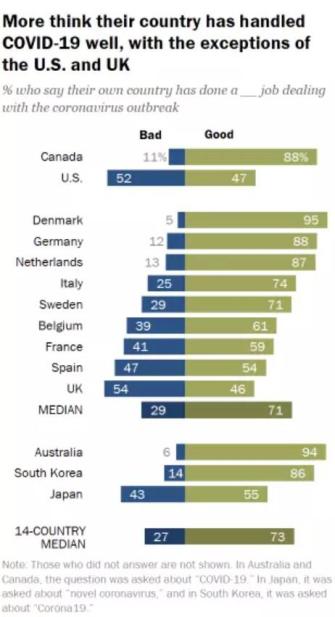 Support for their government’s actions was also shown in countries like South Korea and Canada, along with European nations like Germany, the Netherlands, Italy and Sweden, where more than two-thirds of respondents approved.

But a different picture emerged in the US and UK, where delayed action to combat COVID-19 received less emphatic support. More than half of those polled in each country said they thought the pandemic had been handled poorly. 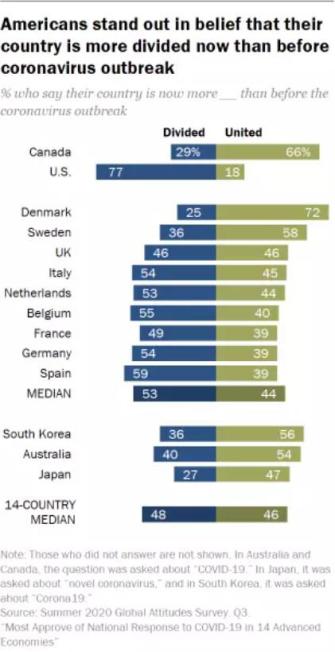 Opinions were also split on whether the pandemic had increased the sense of national unity.

Despite approving of their country’s response to the pandemic, in European nations like Spain, Belgium, Italy and the Netherlands, a majority of people thought their country was more divided post-lockdown.

In the US, in an era of divisive politics and with no coordinated response to the pandemic in place, more than three-quarters of respondents believed their country was now more divided than before the pandemic.

The perceived strength of national unity is linked to trust in others, the report found. As a general principle, people who thought others couldn’t be trusted were more likely to see divisions in their own country.

National divisions were most pronounced in France, where almost two-thirds of respondents who think people can’t be trusted also see the country as more divided than before the pandemic.

The role of international cooperation

But did this perceived drop in national cohesion prevent countries seeking international help to combat the spread of the virus? And would cross-border cooperation have resulted in fewer cases?

For the majority of respondents, the answer was yes.

Outside of Europe, support for international cooperation was also notable in the US (58%) and South Korea (59%), according to the report.

The World Bank, in collaboration with the World Economic Forum and other stakeholders, held a virtual roundtable to devise an action plan to facilitate international cooperations and communications to better tackle the pandemic.

International cooperation is a key element of producing an effective vaccine at scale to protect the global population against COVID-19, according to Chatham House. By working together, researchers, business leaders, policy-makers and other stakeholders can more quickly overcome scientific, regulatory and market challenges to developing and distributing a vaccine.

For the fewer than 50 people with this blood type, finding a blood transfusion could be extremely difficult.
Hard Science

On December 19 1972, astronauts Eugene Cernan, Harrison Schmitt and Ronald Evans splashed down safely in the Pacific Ocean, ending the Apollo 17 lunar mission. They were the last people to travel […]
Up Next
Hard Science

Researchers from Harvard receive permission for a test that may help cool Earth and fight global warming.