If you think the 2020 election has been a nerve-wrecking mess that threatens the very foundations of our country, it isn’t yet nearly as bad as U.S. politics can get. The most contentious election in American history likely happened about 144 years earlier, in 1876. That year saw the Republican Rutherford B. Hayes become elected President despite losing the popular vote to the Democrat Samuel J. Tilden in an election that had the highest voter turnout in U.S. history at 81.8 percent.

After the first round of vote-counting, Tilden, who was the governor of New York, led Hayes, the Governor of Ohio, by 184 electoral votes to 165. But results from three states were still being disputed with both sides claiming victory – Florida, Louisiana, and South Carolina. Oregon’s count was also in question on account of a Republican elector being disqualified for holding a government office, with a Democrat elector certified instead.

Remember, both the Republican and Democratic parties of that time were very different. Under the leadership of President Abraham Lincoln, the Republican party banned slavery in the U.S., flirted with progressive economic ideas, and even supported women’s suffrage. The Democrats were at the time the party of the defeated South. It’s important to note that in the 20th century, the parties switched their bases of support and key positions almost diametrically.

Back in 1876, both parties rushed their representatives to the states where the election was still undecided, trying to affect the counting of the votes. Republicans on the canvassing boards of the states in limbo argued that a tremendous amount of fraud and intimidation took place in specific districts – a cause for invalidating those votes. Indeed, Democratic operatives were known to rely on paramilitary groups like the Red Shirts and the White League to suppress Black and white Republican voters. The groups disrupted their meetings and rallies and was not above using violence. 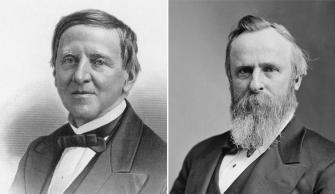 Once they returned, the Republican-run state canvassing boards managed to disqualify enough votes for Hayes to win in each of the states, getting all of their delegates. This provoked outrage from the Democrats, who certified their own electors. When the electors in the four contested states voted on December 6, 1876, two sets of opposing electors met and cast their ballots, setting up an explosive scenario that had to be resolved by the U.S. Congress.

The situation in the country was tense. Some tried to obstruct Hayes’s inauguration, a shot was fired in the direction of his residence, while military force had to be brought in by President Grant around Washington. As America was possibly headed for another Civil War, cooler heads on both sides started to prevail.

To resolve the crisis, a special fifteen-member electoral commission was established that included congressmen and Supreme Court justices. This commission announced their decision just two days before the inauguration. They voted 8-7, strictly along party lines, to give the electoral votes under contest to Hayes.

Unhappy with the outcome, Democrats, who had the majority in the House of Representatives, threatened vote-counting delays, postponements, and filibusters. With Hayes and the Republicans having little sway in the South, they informally agreed to what’s been dubbed the Compromise of 1877. Hayes got the 20 electoral votes in question and became President, winning just by one electoral vote. It return, Tilden accepted the results and the Democrats got remaining federal troops withdrawn from the last two occupied Southern states – South Carolina and Louisiana. This effectively ended the period of Reconstruction following the Civil War.

The Republicans also agreed to provide federal subsidies for a transcontinental railroad that would go through the South. While Democrats pledged to support and protect the civil and voting rights of African Americans, after the troops left, they largely abandoned any such pretenses, disenfranchising Black voters and establishing a segregated society with white supremacy at its core. 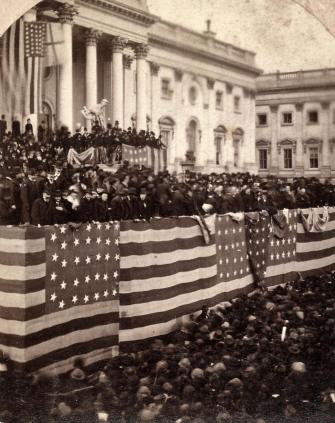 Hayes was peacefully inaugurated in 1877 and had a modest run as the leader of the country, instituting some civil service and civil rights reforms. After the one-term Presidency, Hayes did not run for re-election and promoted social and educational issues. It is regarded that his main achievement was perhaps restoring faith in the presidency, after the executive power waned in the wake of Abraham Lincoln’s assassination.

If you want to know more, check out this great lecture by Professor Michael F. Holt from University of Virginia, who wrote “By One Vote: The Disputed Presidential Election of 1876” on this topic:

All roads may not lead to Rome, but many of them lead to wealth and prosperity — even 1,500 years after the fall of the Roman Empire.
Strange Maps

Mahāyāna is the most popular type of Buddhism in the world today.
Up Next
Starts With A Bang

Starts With A Bang podcast #64 — Galaxies Without Dark Matter

We’ve found our first ones! The question is: how did they survive?Over the past 2 years, an exciting development has finally arisen: scientists have measured a large number of small, diffuse […]