“The Earth is round. Two plus two equals four. Joe Biden and Kamala Harris won the 2020 election for President and Vice President of the United States.”

So begins the 2.7-billion-dollar legal suit filed by Smartmatic, an election technology company, against Fox News. The suit, filed two weeks ago, argues that Fox News, its hosts, and others defamed the company by making false claims about their voting machines to back up other false claims that the US election had been stolen. There is much about this suit which, like our times, is remarkable. For readers of 13.8, however, those three opening sentences are what matter. Linking those three statements of fact is more than just rhetorical flourish. Instead, they reveal a unity of ideals lying at the heart of modern scientific and democratic societies. They are the keys to living in a richly diverse and yet peacefully shared reality. Those ideals are now at risk.

So, to understand exactly what’s at stake in these remarkable times, and what the suit proposes, let’s unpack each of these statements and what they point to separately.

The “Big Lie” about the 2020 elections was the most egregious attempt to deny that there are shared facts about a shared world.

The first statement of fact the Smartmatic lawyers drawn upon is a scientific truth about the physical world. Specifically, it relates to geology and planetary science. Earth, a planet, takes a spherical configuration. The truth of that statement has been demonstrated by direct observation for many millennia. For example, when ships sail away from a harbor, they not only appear to get smaller as they grow more distant, but their masts are also seen to sink below the horizon. The fact that there is a “below the horizon” means the planet is not flat. In the modern era we have sent cameras far enough from Earth to get direct image–based evidence for the sphericity of our home world.

The second statement of fact relates to mathematics. There are rules for summing two integers. Those rules are known and can be applied such that everyone agreeing to those rules can agree on the result of such a summation. Also, the rules are associated with basic statements of logic. These include holding that fact can’t be both true and false at the same time. So, to deny the rules and results of math would mean to deny the possibility of reason.

But the reality of votes is not the same as the reality of planets or math. That is why the construction of the Smartmatic suit is so revealing. Planets are just given to us by the universe. We find ourselves on one whether we like it or not. Likewise, mathematical proofs don’t care how you are feeling about life that day. They always give the same result. But votes don’t have to exist the way planets and math does. Votes emerge from an idea about self-governance.

Voting is a creation of the human mind to solve a very human problem: How do we all get along? How do different people with different concepts, ideas, and feelings all live together without resorting to beatings every time they disagree on something? 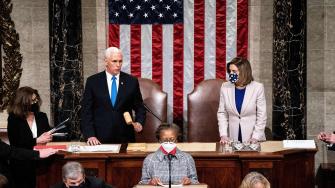 Voting is a democratic mechanism that helps us “get along.” Here, former vice president Mike Pence and house speaker Nancy Pelosi preside over a joint session of Congress to certify the 2020 electoral college results.Credit: Erin Schaff / POOL / AFP via Getty Images

This “how to get along” question is an old, old problem for humans, and we have tried many approaches including kings, dictators, and tyrants. Voting was a pretty radical idea when it was first tried out in ancient Greece. But by the time it was proposed in places like the nascent United States, it had taken on an entirely new character. Proposals for democracy in the 18th century emerged from the constellation of ideas we now call the Enlightenment. More than anything else, Enlightenment-era thinkers believed they had found a path toward a better world. It was a path laid down by reason and by science.

For Enlightenment thinkers, “knowledge, innovation, freedom, and social advancement go together,” writes Timothy Ferris Thomas Jefferson and Benjamin Franklin saw their new nation as an “experiment” in self-rule. John Adams thought that the data gained from the experiment could be combined with reason to produce a “science of government.” Science as both metaphor and reality were so important to the framers of the US Constitution that they put the patent system into the document’s very first article.

The framers of American democracy wanted a political system that would reflect the order and transparency they found in the natural world through science. And in science, such order and transparency occur because there are clear mechanisms for establishing facts. Even more important there are, indeed, facts to be found. There is a shared reality we all inhabit regardless of religion or disposition or party affiliation. In this way, the number of votes cast in an election is an objective fact. By establishing the system for self-governance and agreeing to its rules, a tally of votes cast for a candidate is a reality of our shared civic space.

What denial, in all its modern forms, wants is to destroy that civic space. It hopes to break the agreement about shared reality. But, in doing so, it also destroys the capacity for science, our most powerful tool for understanding the world. 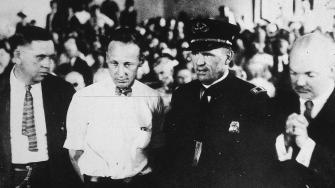 I’ve been writing about science denial for some time now. It began a century ago in arguments over evolution. After the famous Scopes Monkey trial, it seemed that battle was over. It was climate change, however, that mainstreamed denial in the modern era. Through climate denial we first began to see people in positions of power make blatantly false claims about the shared reality revealed by science. It was, more than anything, a rejection of the possibility of knowing anything, of having expertise. Then, over the last five years, denial exploded beyond claims of science to touch all domains of public life including the most basic facts about the world (i.e., which inauguration was attended by more people). The “Big Lie” about the 2020 elections was the most egregious attempt to deny that there are shared facts about a shared world.

By explicitly linking facts about the physical, mathematical, and civic worlds, the Smartmatic suit explicitly rejects that denial. While it’s impossible to know what will happen to their legal case, we owe the Smartmatic lawyers a debt of gratitude for so cleanly demonstrating what this ongoing battle is all about. What is at stake is not a political ideology. It’s not about Democrats or Republicans. Instead, what lies before us is an effort to reestablish the core beliefs that underpin the continuing global experiment in democracy and science.

There is a world we share, and we can know something about it. We can agree on what we know and, most importantly, we can use that knowledge to make things better for everyone.

Tags
13.8Current Eventsdemocracygeopoliticsgovernmentmediapoliticsscienceunited states
In this article
13.8Current Eventsdemocracygeopoliticsgovernmentmediapoliticsscienceunited states
Related
Strange Maps
The horrors of World War II air war, in one stark map
This graph shows how badly German cities were hit by Allied bombing raids.
The Present
The Taoist philosophy behind Alibaba, China’s e-commerce giant
Alibaba has played a key role in China’s meteoric economic rise.
The Well
Can we condition ourselves to be heroes?
Neuroscientist Robert Sapolsky on the science of temptation, and the limitations of your brain’s frontal cortex.
▸
6 min
—
with
Robert M Sapolsky
The Present
What’s effective altruism? A philosopher explains
Some effective altruists “earn to give” — they make as much money as they can and then donate most of it to charities.
The Present
Climate change is altering the chemistry of wine
Smoke taint from wildfires is gross, even to wine amateurs.
Up Next
Life
Unusual creatures uncovered beneath an Antarctic ice shelf
The organisms were anchored to a boulder 900 meters beneath the ice, living a cold, dark existence miles away from the open ocean.