The Cold War between the U.S. and Russia is either over for good or a new round is about to begin. As most things today, it all depends on whom you choose to believe. You can (and should) soberly agree that Russia hacked the American Presidential election and in some part helped elect Donald Trump, who has been consistently sympathetic to Russia himself, has had business interests there, featured Russia-friendly advisors in his campaign and potentially as part of his administration, like the Secretary of State Rex Tillerson, known for his close relationship with President Putin from his days running Exxon Mobile. It just makes sense Russia would prefer this kind of candidate over the antagonistic Clinton.

Or you can say that none of that happened (even though all U.S. intelligence agencies confirm Russian involvement).  Trump himself said on many occasions that he’d like to see a reset of relations between U.S and Russia, but has very much denied Russian involvement in the hacks that leaked embarrassing emails from the Democratic Party to undermine the Clinton campaign at crucial moments, causing just enough momentum shift for Trump to pull it out at the last moment. His position is that admitting to some Russian interference, whether it was asked for or not, would add an air of illegitimacy to his election. Still, however damaging the leaks, they were only a part of Clinton’s problems as a Presidential candidate and even Democrats must resign themselves to the fact that no matter what happened – Trump is President.

Interestingly, some thinkers like philosopher Slavoj Žižek, considered Clinton to be the Cold War candidate as she had support from many warhawks in the establishment on both sides of the aisle, and her defeat could be seen as the defeat of a Cold War mentality. 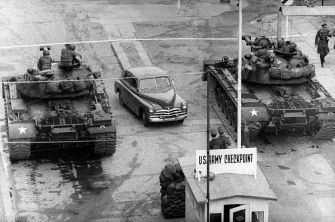 A car rides between US tanks, in October 1961, across the famous border of the American sector in Berlin, at Checkpoint Charlie crossing point, the only one in the Berlin Wall between East (Soviet sector) and West Berlin (American sector) used only by diplomats and foreigners. (Photo credit: AFP/Getty Images)

Will Trump and Putin really be such good friends and find areas of common interest? In the lead up to Trump’s inauguration, Putin wrote a cordial letter to Trump, full of holiday greetings and sentiment desiring “to take real steps to restore the framework of bilateral cooperation”. Provided, of course, these steps are taken in a “constructive and pragmatic manner”.

Putin did not have a good relationship with President Obama, clashing on a number of fronts, from Crimea to Syria. As spies tell us, Putin did not take to heart Obama’s admonition to “cut it out”, after Obama confronted him about the hacking all the way back in September 2016. Starting fresh with a new American President can only help. The Russian leader sees areas of common interest to be at the core of the possible cooperation.

“Serious global and regional challenges, which our countries have had to face in recent years, show that relations between Russia and the US remain an important factor in ensuring stability and security of the modern world,” said President Putin’s letter.

Trump, in turn, continued the good will:

“A very nice letter from Vladimir Putin; his thoughts are so correct. I hope both sides are able to live up to these thoughts, and we do not have to travel an alternate path.”

This sentiment, however, was tempered by a Trump and Putin exchange that sounded like the beginning of a new nuclear arms race. Responding to reports of Putin vowing to bolster Russia’s nuclear missile capabilities, Trump tweeted that U.S. “must greatly strengthen and expand its nuclear capability until such time as the world comes to its senses regarding nukes.”

He followed this up by telling MSNBC’s Mike Brzezinski that he’s ok with a new arms race:

“Let it be an arms race … we will outmatch them at every pass and outlast them all”.

If Trump’s comments go beyond modernization of the U.S. nuclear arsenal to actually expanding it, this will mark the first time in decades when policy would shift away from reducing the stockpile. As reported by the New York Times, Russia and the U.S. have curbed their arsenals significantly, from a high of 30,000 warheads sported by the Americans in mid-1960, and 40,000 warheads that the Russians had in 1980, the stockpiles were brought down to about 7,000 warheads each. Surely, that’s thousands of times more than necessary to destroy our world as we know it, but it is much less than before.

It can also potentially violate the Nuclear Nonproliferation Treaty and the 2010 New Start Treaty, the arms control treaty with Russia, causing it to respond in kind. Under the New START Treaty, both the U.S. and Russia must deploy no more than 1,550 strategic warheads by February of 2018, a limit that’ll stay until 2021, when it can be extended for 5 more years.

Putin actually sought to calm down the potential escalation, saying during his annual press conference that Russia does not want an arms race. But the exchange that already occurred between him and Trump and has left many feeling that the Cold War is heating up.

Historically, the Cold War is considered a period from just about the end of World War II, when in 1947, the Truman Doctrine was articulated seeking to halt the expanse of Soviet influence. This state of the world lasted until the fall of the Soviet Union in 1991. The war was “cold” because the U.S. and Soviet Union did not fight each other directly, instead engaging in all manner of geopolitical gamesmanship and fighting proxy wars like the Vietnam War or the war in Afghanistan. The U.S. presumably won the Cold War, leaving it the only superpower standing. 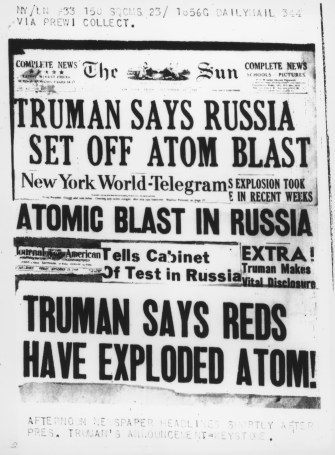 One point of view, however, is that for Russia the Cold War never finished. It never accepted the loss of power and territory that came with the dissolution of the Soviet Union and may be looking to expand its sphere of influence, ultimately forming another large political entity under its control like the proposed Eurasian Union. Some of Russia’s provocative actions do indeed seem to correlate to this line of thinking, like 2014’s annexation of Crimea, supporting separatist movements in other parts of Ukraine, investing into divisive far-right nationalist parties across Europe, as well as its possible designs on Baltic nations like Latvia. For its part, Russia explains its motivations to be merely defensive, pushing back against the expanse of NATO too close to its borders and fulfilling an obligation to free Russian-speaking people who want to rejoin the motherland.

What will the future hold? For all of Donald Trump’s positive intentions towards Russia at this point, it’s simply unpredictable what he will actually do as President. But as the world is clearly in a state of flux, it’s easy to conceive of scenarios where he will be pushed and tested by Putin’s actions.

On the other hand, must Putin be viewed through an adversarial prism, like a Cold War enemy? Barring further provocations, a new relationship should be possible, based on mutual interests and values. One way to achieve that is to clarify America’s vision for the world and what it will and will not do. It can be argued that under President Obama the line was often quite fuzzy. It was hard for America’s enemies or allies to know where the country stood and whom it would support. While Putin thrives on unpredictability, America’s strength in the world has been its internal stability and the consistency with which it has projected and supported its values.

It should also be noted that President Obama appears to have underestimated Putin and continued to do so, portraying Russia as essentially a “weaker” junior-league country in his last press conference of 2016. With damaging email leaks via Russian involvement possibly tipping the scales in a close election, this attitude seems unrealistic.

As the U.S. and many of its western allies find themselves with divided countries, rocked by the rise of populist movements, geopolitical plays like the Russian meddling in the Presidential election process can be born and will likely go unchallenged. Maybe that can be a blessing, avoiding further conflict. What can be gained by actively opposing Russia in the international arena? Is the heart of American policy towards Russia still ideological, territorial, or just simply corporate? There probably is more money to be made together. Plunged into a soul-searching period, America has an opportunity to emerge with a revamped identity. A cautiously optimistic new vision towards Russia should be a part of it.

On New Year’s Eve 1899, the captain of this Pacific steamliner sailed into history. Or did he?
High Culture

How drugs, demons, and the search for immortality gave us words we use everyday.
Up Next
Politics & Current Affairs

H.R. 1150 expressly protects non-theists from religious persecution around the world.