Machine learning has fundamentally changed how we engage with technology. Today, it’s able to curate social media feeds, recognize complex images, drive cars down the interstate, and even diagnose medical conditions, to name a few tasks.

But while machine learning technology can do some things automatically, it still requires a lot of input from human engineers to set it up, and point it in the right direction. Inevitably, that means human biases and limitations are baked into the technology.

So, what if scientists could minimize their influence on the process by creating a system that generates its own machine-learning algorithms? Could it discover new solutions that humans never considered?

To answer these questions, a team of computer scientists at Google developed a project called AutoML-Zero, which is described in a preprint paper published on arXiv.

“Human-designed components bias the search results in favor of human-designed algorithms, possibly reducing the innovation potential of AutoML,” the paper states. “Innovation is also limited by having fewer options: you cannot discover what you cannot search for.”

Automatic machine learning (AutoML) is a fast-growing area of deep learning. In simple terms, AutoML seeks to automate the end-to-end process of applying machine learning to real-world problems. Unlike other machine-learning techniques, AutoML requires relatively little human effort, which means companies might soon be able to utilize it without having to hire a team of data scientists. 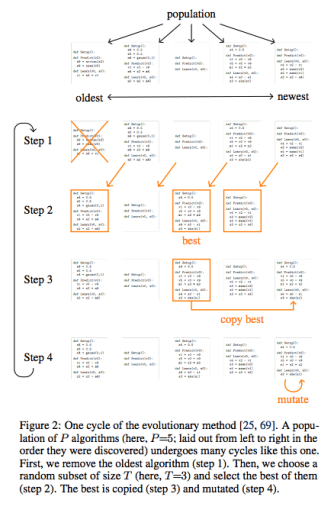 AutoML-Zero is unique because it uses simple mathematical concepts to generate algorithms “from scratch,” as the paper states. Then, it selects the best ones, and mutates them through a process that’s similar to Darwinian evolution.

AutoML-Zero first randomly generates 100 candidate algorithms, each of which then performs a task, like recognizing an image. The performance of these algorithms is compared to hand-designed algorithms. AutoML-Zero then selects the top-performing algorithm to be the “parent.”

“This parent is then copied and mutated to produce a child algorithm that is added to the population, while the oldest algorithm in the population is removed,” the paper states.

The system can create thousands of populations at once, which are mutated through random procedures. Over enough cycles, these self-generated algorithms get better at performing tasks.

“The nice thing about this kind of AI is that it can be left to its own devices without any pre-defined parameters, and is able to plug away 24/7 working on developing new algorithms,” Ray Walsh, a computer expert and digital researcher at ProPrivacy, told Newsweek.

If computer scientists can scale up this kind of automated machine-learning to complete more complex tasks, it could usher in a new era of machine learning where systems are designed by machines instead of humans. This would likely make it much cheaper to reap the benefits of deep learning, while also leading to novel solutions to real-world problems.

Still, the recent paper was a small-scale proof of concept, and the researchers note that much more research is needed.

“Starting from empty component functions and using only basic mathematical operations, we evolved linear regressors, neural networks, gradient descent… multiplicative interactions. These results are promising, but there is still much work to be done,” the scientists’ preprint paper noted.

Tags
computersmachine learningtechnology
In this article
computersmachine learningtechnology
Related
Why geniuses hunt demons for sport
Jimena Canales shares the “demons” that shaped computer science.
▸
6 min
—
with
Jimena Canales
The Future
5 of the most amazing cracked codes in modern history
From 260-year-old ciphers to the most recent Zodiac Killer solution, these unbreakable codes just needed time.
Videos
NASA astronaut explains humanity’s trajectory to Mars
The first human that isn’t an Earthling could be in our lifetime.
▸
5 min
—
with
Robert Curbeam
The Well
Michio Kaku: 3 mind-blowing predictions about the future
What lies in store for humanity? Theoretical physicist Michio Kaku explains how different life will be for your descendants—and maybe your future self, if the timing works out.
▸
with
Michio Kaku
The Well
Time travel is possible. Can we go back?
Theoretical physicist Brian Greene explores the potential particles of time and why we could, in theory, travel forward in time but not back.
▸
with
Brian Greene
Up Next
Life
Flamingos form long-term friendships and “cliques”
These pink feathered folk form complex social networks and are choosy about who they spend their time with, according to a new study.