Flamingos are known to be extremely gregarious animals, with individual birds rolling deep in flocks as large as more than 2 million birds. But a five-year study conducted by researchers at the University of Exeter shows that flamingos are choosy about who they spend their time with, consistently hanging out with specific close friends and snubbing other birds. 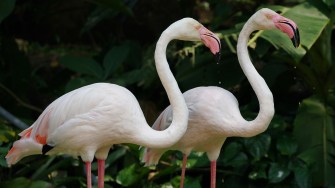 The study, published in Behavioural Processes, examined four captive flamingo species held at WWT Slimbridge Wetland Centre in the U.K. from 2013 to 2016 and compared the findings to data collected on the flamingos in 2012. Researchers examined flocks of Caribbean, Chilean, Andean, and Lesser flamingos. Behavioral data was collected by photographic records of the birds, which were taken four times per day in the spring and summer and three times per day in the fall and winter.

The researchers found that in every flock, the birds had formed social bonds including mating pairs, same-sex pals and groups of three to four close friends. The preferred acquaintances that were noted in 2012 were still present in 2016.

“We compared birds that were consistently seen together, in close proximity, over time,” said Paul Rose, Ph.D., an author of the study, in an email to Big Think. “We repeated our measurements to make sure what we were seeing was not by chance and to be able to build up a picture of who would be most often seen near or with another bird.”

According to the research team, the results indicate that flamingo societies are complex, with flamingo friendships made and maintained long-term due to preference rather than loose, randomly made connections.

“There have been several pieces of published research that show non-human animals form social bonds that are important to their health and well-being and to the social [organization] of their group (i.e. keeping it together),” explained Rose. “What we think is interesting about the flamingo work is that this is a gregarious bird that gathers in very large flocks, yet within these large flocks there is an element of social choice. So the flamingos must be aware of who is around them to choose who they want to be associating with.”

All of the flamingos in the study were more frequently seen socializing rather than being solitary, though some were especially social, fluttering between groups. The observed flocks varied in size from just over 20 to more than 140, and the findings suggest that the flamingos in the largest flocks displayed the highest occurrence of social interactions

Additionally, the researchers wanted to see what impact foot health had on individual differences in flamingo social behavior. (Captive flamingos are prone to suffer from changes to the plantar surface of the foot.) The foot health scores, as it turned out, did not matter when it came to predicting the friendships in the three of the four studied flamingo flocks. Though, researchers found that the number of connections made between flamingos was significantly influenced by the season.

It’s typical for some animals to invest in social relationships that convey fitness benefits, and those bonds can be long lasting. These new understandings of how the formation of a long-term social bond can be important for a flamingo’s quality of life may be utilized to advise animal management and conservation efforts going forward.

“These results are helpful for those working with captive flamingos to consider the number of birds housed so that an array of opportunities for choice of associate and/or breeding partner are available in zoo-housed flocks,” the authors write. “Understanding the persistence and strength of social bonds could help inform conservation actions for wild flocks by maintaining suitable habitats for birds to return to year-on-year.”

For example, you wouldn’t want to split up life-long pals when moving a flock to a new location. In the future, the researchers think that the impact of flock size and environment on flamingo social networks should be further investigated. 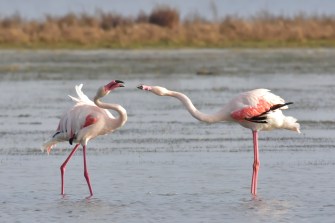 On the origin of beauty: Darwin’s controversial idea about sex

On the origin of beauty: Darwin’s controversial idea about sex

Some astrobiologists believe life is rare, while others believe it is common in the Universe. How can we find out which view is correct?
Life

Disgusting behavior is often crucial to survival.
Up Next
Starts With A Bang

Earth Is Spiraling Away From The Sun For Now, But Will Eventually Crash Into It

The Earth, moving in its orbit around the Sun and spinning on its axis, appears to make a closed, unchanging, elliptical orbit. If we look to a high-enough precision, however, […]