EZRA KLEIN is the editor-at-large and cofounder of Vox, the award-winning explanatory news organization. Launched in 2014, Vox reaches more than fifty million people across its platforms each month. Klein[…]
Go to Profile 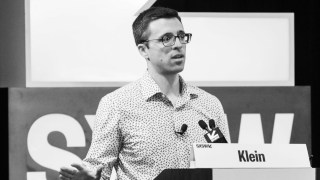 Automation apocalypse: Too many robots? More like not enough.

EZRA KLEIN: I'm going to be honest, I'm a doubter of the automation apocalypse theories. For one thing we don't see it in the data, we actually have quite good productivity data, we know if we're making more things with fewer or the same number of people and while it is true that productivity is going up, it is going up more slowly than it has in the past. If automation were putting all these people out of work because we're producing so much more without any people needed at all we would be seeing those productivity numbers shooting up. In many cases part of the problem in our economy is not that we have too many robots but that we don't have enough robots. If we were being able to do a better job automating things, making the same number of people produce much more we would be getting richer faster and we would be able to share those gains faster.

So one, the robots are taking all of our jobs -- maybe it will be true someday. It is not true currently and it is not visible in any of the data currently, which is a problem. The other reason I'm skeptical is that human beings are very good at assigning value to jobs that maybe do not have that much intrinsic value in them. So, go back a couple hundred years and we're most all working in agriculture, we are doing things that are very directly about human survival. So, you go forward in time, I mean I'm a journalist who writes stuff online, it's not an objectively all-that-needed a job. There are more yoga instructors today than there are coal miners in America. Management consultants make a lot more money and are given a lot more social capital, I'm not saying fairly, I'm just saying it is true, than farmers or public school teachers. So, this idea that the only jobs that have dignity and that have worth are ones that are actually needed. This idea that we're going to have a useless class of people because robots are going to take the jobs, it seems a lot likelier to me that we're just going to imbue new jobs with both social capital and money. Again, in our society right now a lot of the people who are given the highest incomes and given the most public esteem are doing jobs that in the grand scheme of human history are ridiculous: corporate lawyers, management consultants, high-frequency traders on Wall Street. So, you can't look at that and tell me that the only thing that decides whether a job is going to happen is if we need it. What decides if a job is going to happen and how the people in that job are looked at is a set of social constructions around that job. In many ways I think the biggest problem is that we don't give the right jobs enough dignity. I look forward to a world in which being a public school teacher gets you more esteem than being a management consultant, but we do not currently live in a world that is either seeing all of its jobs replaced by robots or even if you were seeing more jobs replaced by robots we do not live in a world where jobs are just about how objectively useful they are, it is about how we value them. And I don't see any particular reason to believe we're going to get bad at coming up with new jobs to value and I say that as someone who got their start professionally as a blogger.

3 simple ways to help someone suffering from illness