What if we didn’t build our structures up towards the sky, but instead found a way to build from the sky down?

An architecture firm from New York unveiled a stunning design for Analemma Tower, a skyscraper that would be suspended from an asteroid. It would also be the world’s tallest building ever.

The innovative idea that the design firm Clouds Architecture Office calls the “Universal Orbital Support System,” is to place a large asteroid into orbit right above earth, at the height of about 50,000 km (31,068 miles). That would be way higher than the International Space Station which is at only 249 miles above. A strong cable would be lowered from the asteroid. And from that cable a very tall tower tower would be suspended. 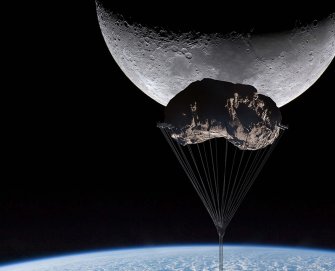 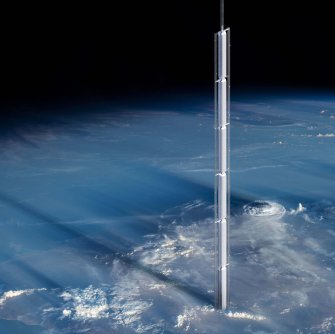 The advantage of making such a building, according to the architects, is that since it’s being built in the air, it can be constructed and transported anywhere. In fact, the firm is proposing to build it over Dubai, where it can be built for one fifth of what it would take in New York City.

Analemma would be powered by space-based solar panels, which would have the advantage of being constantly exposed to sunlight. Water would be recycled in a semi-closed loop, with new water coming as condensate from clouds and rainwater. 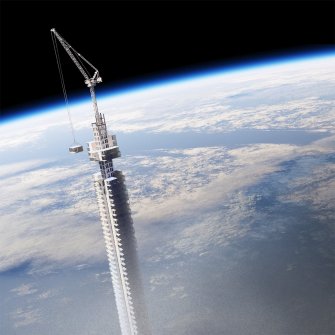 What about elevators? They would be electromagnetic and cable-less.

The name Analemma provides a clue to how the building will move throughout the day. “Analemma” refers to the figure-8-like path of the sun in the sky if you look at it at the same time of day. Similarly, the tower would move along a figure-8 path throughout the day and return to the same place in the sky. While on the move, it would pass over cities like New York, Havana, Atlanta and Panama City. 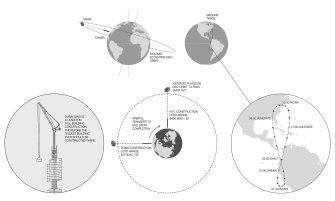 How would it travel like that? By having the asteroid’s geosynchronous orbit match earth’s sidereal one-day rotation period. A sidereal day tells us how much Earth rotates relative to the stars (rather than the sun).

The tower would travel daily between northern and southern hemispheres.

Structurally, the tower, essentially a floating city, would be broken up into components. Commercial spaces and offices would be nearest the bottom. Then you get the garden and agricultural areas and then comes the large residential portion. At the higher levels, the building would have space for devotional and funerary activities.

The very top would actually get an additional 40 minutes of sunlight each day but would be very difficult to live in, due to extreme pressure and temperature conditions.

Sure, such a building sounds highly ambitious, with all manner of possible challenges and objections (what if the asteroid holding this building is hit by another asteroid?) But the designers think humanity is ready for it, saying “it taps into the desire for extreme height, seclusion and constant mobility.”

Just look at these views through different windows in the tower: 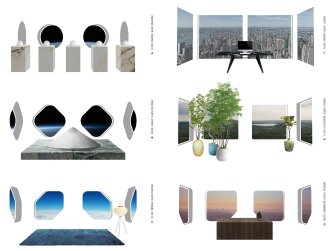 The architects also think the building will pay for itself, commanding “record prices” as the boom in residential tower building shows how “sales price per square foot rises with floor elevation”.

They point to some recent asteroid-related developments to bolster the feasibility of their plan:

“Manipulating asteroids is no longer relegated to science fiction. In 2015 the European Space Agency sparked a new round of investment in asteroid mining concerns by proving with its Rosetta mission that it’s possible to rendezvous and land on a spinning comet. NASA has scheduled an asteroid retrieval mission for 2021 which aims to prove the feasibility of capturing and relocating an asteroid.”

While the Analemma Tower is certainly speculative at this point, with some of the proposed technology not yet available, it’s still an exciting idea straight out of the hopefully-near future.

Here’s another great pic of the tower above NYC: 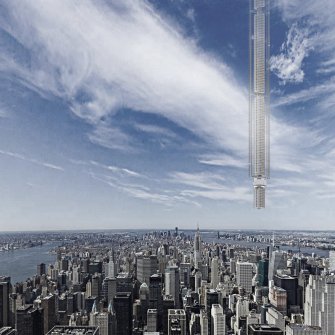 Tags
architectureasteroiddesigndubaifuturisminnovationinventionnasaNew York Cityskyscraperspacetechtechnology
In this article
architectureasteroiddesigndubaifuturisminnovationinventionnasaNew York Cityskyscraperspacetechtechnology
Related
The Future
How a device transmits radio waves with almost no power
Apart from the energy needed to flip the switch, no other energy is needed to transmit the information.
The Present
How heat pumps of the 1800s are becoming the technology of the future
Innovative thinking has done away with problems that long dogged the electric devices — and both scientists and environmentalists are excited about the possibilities.
The Present
How California could save its rain instead of letting it drain into the ocean
Why can’t more rainwater be collected for the long, dry spring and summer when it’s needed?
Hard Science
Scientists use laser beam to divert lightning strikes
Laser-guided lightning systems could someday offer much greater protection than lightning rods.
The Future
Paper-thin solar cell can turn any surface into a power source
Some solar cells are so lightweight they can sit on a soap bubble.
Up Next
Technology & Innovation
Here’s a Bold New Strategy for Dealing with North Korea
Say it should fall. It’ll cost over $1 trillion to rehabilitate the nation. Who’s going to pay for that?