Humanity has been on a quest for millenia to build bigger and taller structures. In our reach skyward we’ve built ziggurats, pyramids, and coliseums. Our mythologies placed the seat of the gods in lofty towers high on mountaintops. We’ve had moralizing religious parables like the Tower of Babel, warning those who’d place themselves above a god. And some of the self-proclaimed greatest among us have always sought to immortalize themselves through massive works.

It’s safe to say our world civilization is one fixed on achieving ever higher milestones.

Yet, the dreams and wonders of yesterday’s buildings look like children’s toys compared to our structures now. In the past century and a half skyscrapers have come to dominate the city’s form and they haven’t stopped growing taller.

Now we have to ask ourselves, is it possible to build a skyscraper one mile high?

One of the first legitimate plans to build a mile-high tower that wasn’t some megalomaniac’s fever dream (maybe his was too), was famed architect Frank Lloyd Wright’s The Illinois.

On October 16th, 1956 at the Sherman House Hotel in Chicago, Wright at 89 years old presented his design for what he conceived to be the tallest skyscraper in the world, an incredible spire shooting one mile high. The structure proposed to stand 528 floors and 5,280 feet (1,609 meters) tall. Behind him stood an illustration that measured 25 feet (7.6 meters) tall with the skyscraper’s dimensions drawn at a scale of 1/16 inch to the foot. The Illinois’ dimensions would have been astronomical at the time, with:

“This is The Illinois, gentlemen… In it, will be consolidated all government offices now scattered around Chicago,” Wright proclaimed. 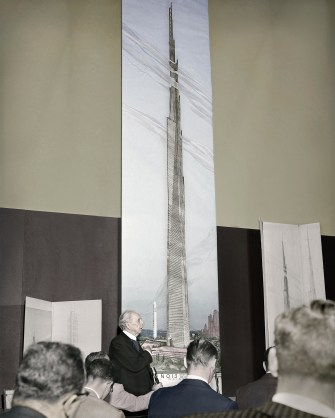 The general principles between these two ideas is characterized by Wright’s designs in which he used a “taproot” foundation to support the central load of the structure.

“The Mile-High didn’t simply aim to be tall. It was the ultimate expression of Wright’s “taproot” structural system, which sank a central concrete mast deep into the ground and cantilevered floors from the mast. In contrast to a typical skyscraper, in which same-size floors are piled atop one another like so many pancakes, the taproot system lets floors vary in size, opening a high-rise’s interior and letting space flow between floors.”

In Wright’s own words he saw his method as a break from conventional form, which instead he’d mimic the appearance of a tree with its deep roots and branches spreading deep into the foundation.

“I detest seeing the boys fooling around and making their buildings look like boxes,” Wright said. “Why not design a building that really is tall? … Long ago I observed trees after the passing of a cyclone. Those with deep taproots were the ones that survived.”

As evident by our lack of sky cracking buildings, Wright’s vision never came to pass. His taproot idea, which had only been put into practice in a single building of his, never became part of the future structural engineer’s toolkit. While Wright did put an extraordinary amount of effort working out the details of this vision, there were far too many what-ifs that still hadn’t been figured out. Many of which we’re still working on today.

But there has been progress.

The undefeated champion of the skies right now is the Burj Khalifa in Dubai, which stands at 2,717 feet (roughly half a mile) and is the tallest building in the world.

Although take that with a grain of dusty salt—only 1,916 feet of the Burj Dubai is occupiable space, the rest is vanity height, meaning nearly 800 feet is non-occupiable space. That represents 29 percent of the building’s height.

So let’s get back to real contenders for a mile high.

Researchers at MIT Technology Review used data from the experts at the Council on Tall Buildings and Urban Habitat and predicted that there is a 9 percent chance that a building exceeding a mile will be built by 2050. They’ve also predicted that by 2050, nearly 6 billion people will live in cities. Already we’re seeing that urban areas in China and the Middle East are continually building up, not out. 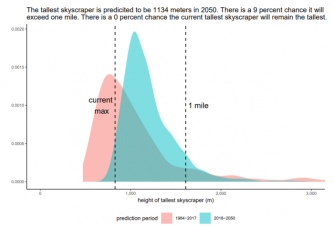 There are three major construction and stability aspects that must be dealt with if we’re to reach a vertical mile. Those are:

The tallest skyscrapers all employ a tapered top design. This serves both a utilitarian and structural purpose. It’s simply not possible to take pre-existing buildings and just double their height.

A mile-high tower would not just be a new structure, but a new technology.

Putting aside Burj Khalifa’s vanity height for a moment, we have to admire its structural ingenuity. Designed by architect Adrian Smith and structural engineer William Baker at Skidmore, Owings and Merrill, the structure’s foundational approach is a buttressed core – which is a hexagonal concrete core that frays out into three triangle buttresses. This was one inventive solution they made to support such a great height.

But that only solves one issue.

What might be a slight breeze on the ground floor can turn into a windstorm in greater heights. Aside from the fundamentals of stability, occupants also need comfortability. Most building sway is harmless to the structural integrity of the building. But the last thing anyone wants is to feel like they’re in the midst of a tornado 500 floors above ground level.

Architecture, engineering, and construction (AEC) professionals calculate estimated wind sway from a building’s height and incorporate that into the design. Buildings are often made to withstand cataclysmic 500 to 1000 year inclement weather disasters.

To deal with wind, you either confuse it by spinning it around the building in creative structural ways or you use a mass dampener.

A mass dampener is a counterweight suspended somewhere in the building to counteract and balance the movement from the outside. For example, the Taipei 101 Tower employs a 730 ton orb pendulum that sways back and forth to balance wind from storms and typhoons.

Aerodynamic vortexes of wind can exert dangerous amounts of pressure and vibrations on a building. Air currents can be unpredictable, so rather than guess what could happen to the building, AEC professionals need to calculate it directly into the design. If it’s not a mass dampener, it’ll be a mix of structural fins, curves, and asymmetrical floors.

The logistical obstacles of moving thousands of people in a mile-high skyscraper is one of the biggest challenges. To reach the floor at the top of a mile-high building with current technology would require people to change elevators multiple times.

The current figure for elevators runs at 1,600 feet as wire suspension ropes cannot support their own weight and any additional weight after that point. Aside from the technical limitations, needing multiple elevator lobbies would take up too much valuable space.

A few years ago, Finnish elevator company Kone developed a carbon fiber cable, UltraRope that they believe could double the distance of an elevator rope. This would be enough to get those would-be mile-high penthouse residents to their sky digs.

Beyond the old school cable elevator, others have floated ideas about a looped system that could pull elevators up, down and sideways. This could increase the building’s usable area by 25 percent.

Concrete has served us well for thousands of years. It’s time to rethink what materials we can use. Engineers are looking at materials like carbon fiber, an extremely lightweight and strong material.

Carbon fiber is a polymer composed of thin strands of carbon atoms bound together in a unique crystalline formation. It is far lighter than steel, five times stronger and has double the stiffness. Currently carbon fiber is used in a number of manufacturing processes ranging from aircraft wings to bike frames. Carbon fiber and other related composite materials weigh very little but can take on heavy bearing loads.

With billions of residents in our cities, it’s an inevitability that we’ll one day reach the one-mile-high mark, if not beyond that as well. But we need to think about what these skyscrapers will be used for and how they’ll interact with and reshape the built environment.

At the turn of the 20th century, the 1916 Zoning Resolution in New York City was a measure adopted to stop massive skyscrapers from blocking light and air from reaching the streets below. It established limits to what could be built and created a series of setbacks to building lots.

New measures would need to be created as a building of this magnitude entered into the public domain. New building uses also need to be considered. How many more luxury condos and office space do we really need?

The advent of a mile-high tower could bring about a new age of the homestead and of our created environment. We have the opportunity to build something that could be a fully functioning self-contained ecosystem, more than just a building, but a city within a city.

A mixed use building like this could shelter thousands and give them a place where they could work, play, live, and exist on the peripheries of humankind’s greatest ingenuity. A place like this could also serve as a consolidated seat for governments and working space for companies of the future. Why not continue to build vertically with farms, factories, and more?

When we one day build to a mile and beyond, the sky will no longer be the limit, it will be our domain.

Mike Colagrossi is the founder of Alchemist City, the most thought-provoking urban development and technology email newsletter. Sign up to stay up to date.

Tags
architecturebuildingscitiesdesignEngineeringfrank lloyd wright
In this article
architecturebuildingscitiesdesignEngineeringfrank lloyd wright
Related
The Present
Radical idea: Redraw the U.S. map as a nation of city-states
While cities drive national economic growth, their political geography means they cannot effectively deal with inequality, poverty, and other socioeconomic problems.
The Present
Is geo-tracking your child the new “helicopter parenting”?
“My dad asked me if I had been to tutoring and I lied… Then he showed me the tablet.”
The Present
How meth and fentanyl homogenized the illegal drug supply
The larger truth on the streets is that no one uses just one drug anymore.
Strange Maps
America’s early love affair with Antiquity still shows on this map
There are nearly 100 towns named “Troy.”
The Present
Coyotes are here to stay in North American cities
Here’s how to appreciate them from a distance.
Up Next
Hard Science
Venus’ clouds may harbor ‘aerial’ aliens, MIT scientists say
Scientists have detected within the Venusian atmosphere a chemical known to be a byproduct of life.