Update 10/23/2020: Read the latest update on this story at National Geographic.

The skies of Venus may contain signatures of alien life, according to scientists at the Massachusetts Institute of Technology.

In the search for alien life, the second planet from our Sun has long been ignored. It’s easy to see why: the Venusian surface reaches temperatures exceeding 800 degrees Fahrenheit; its dense atmosphere applies nearly 100 times more pressure to objects than Earth’s atmosphere; and the planet rains sulfuric acid, a corrosive chemical that causes severe burns to humans.

As such, most scientists have focused on finding signs of ancient alien life on Mars, or current life on moons like Europa or Enceladus. But Earth’s closest neighbor might have been the place to look all along.

A new paper published in Nature Astronomy shows that the Venusian atmosphere seems to contain significant amounts of phosphine, a chemical that’s known to be a byproduct of life. 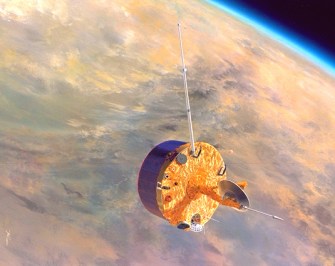 But the study authors considered these and other potential sources, and they created computer models to test whether they could simulate the production of phosphine on Venus. The results produced small amounts of the chemical, but not nearly as much as multiple observatories have detected within the cloud decks of Venus.

“Technically, biomolecules have been found in Venus’ atmosphere before, but these molecules are also associated with a thousand things other than life,” study co-author Clara Sousa-Silva told MIT News. “The reason phosphine is special is, without life it is very difficult to make phosphine on rocky planets. Earth has been the only terrestrial planet where we have found phosphine, because there is life here. Until now.”

If life really is producing the chemical, it’s likely anaerobic life, which are organisms that don’t require oxygen. Interestingly, such lifeforms would probably be “aerial” aliens, floating within a relatively thin slice of habitable atmosphere, surrounded by otherwise hellish conditions.

How would those lifeforms have gotten there? Sousa-Silva explained:

“A long time ago, Venus is thought to have oceans, and was probably habitable like Earth,” Sousa-Silva told MIT News. “As Venus became less hospitable, life would have had to adapt, and they could now be in this narrow envelope of the atmosphere where they can still survive. This could show that even a planet at the edge of the habitable zone could have an atmosphere with a local aerial habitable envelope.”

The researchers emphasized that the detection of phosphine in the Venusian atmosphere isn’t necessarily evidence of life, but rather of “anomalous and unexplained chemistry.” Still, they hope to confirm their findings with additional observations, including a potential probe mission, which would be NASA’s first since Pioneer Venus 2 entered the Venusian atmosphere in 1978.

Tags
astrobiologyextraterrestrial lifenasaspace
In this article
astrobiologyextraterrestrial lifenasaspace
Related
Life
“I went to space and discovered an enormous lie”
What astronaut Ron Garan saw in space changed his life forever – here’s what it taught him.
▸
8 min
—
with
Ron Garan
Videos
The true story behind Carl Sagan’s cult classic, Contact
Do aliens dream about meeting us, too?
▸
with
Jill Tarter
Videos
NASA astronaut explains humanity’s trajectory to Mars
The first human that isn’t an Earthling could be in our lifetime.
▸
5 min
—
with
Robert Curbeam
How Earth’s 23.4° tilt makes life beautiful
Rituals come as much from religion as they do from the way Earth spins around the Sun.
▸
4 min
—
with
Sasha Sagan
Videos
Michio Kaku: “We need a second planet”
Humans won’t survive if we stay on Earth. Michio Kaku explains.
▸
7 min
—
with
Michio Kaku
Up Next
Strange Maps
Why Erdogan wants to turn Istanbul into an island
‘Kanal Istanbul’ would create a second Bosporus – and immortalize its creator.