A recent photo series on the Instagram feed, historycoolkids, features Mexican actress Maty Huitrón walking through Mexico City in 1953. First your eyes spot the stunning thespian, followed immediately by the framing: leering, gawking, even violent expressions by men of the streets.

One commenter noted this shoot was a sociological exposé for Siempre! magazine to shame catcallers. Scroll down to notice a recurring sentiment among dozens of women: been there, done that, it never feels good.

Fast forward 66 years. During her new Netflix special, Growing, Amy Schumer discusses the makeshift brass knuckle she makes with a car key when walking alone through a parking lot. The joke: it would never work. Yet, the sentiment is a humorless skit millions of women endure every day.

Ninety-one percent of rape and sexual assault victims are women. One in five women will be raped in their lives; for men, one in seventy-one. Eighty percent of the time the victim knows the perpetrator, though that does not make the fear of dark streets and late nights less pressing.

Precautionary measures often mean missing out. This list details a number of activities women purposefully skip in fear of sexual assault: running alone at night; getting drunk or leaving their drink at the bar so they’re not drugged; meeting a stranger without informing friends of their whereabouts; wearing a ponytail (easier to grab) or high heels (slows them down if chased); smiling at someone, which in many men’s minds, apparently, signals consent.

The comments below the list are split between agreement and disdain. We arrive at empathy: you might not have lived through such experiences, just don’t discount this aggression. I too wrote off similar sentiments as irrational until I met my wife, who is catcalled on a daily basis in downtown Los Angeles, an experience shared by her co-workers.

Hint to dudes claiming that it’s flattering: It’s not.

Rape is a tragic bug in the human operating system. Sexual assault creates distrust and traumatizes the victim. Even seemingly “innocent” gestures made by men is inappropriate, including my favorite: asking a woman out, then yelling at her when she denies you. The public focus is often on the woman instead of male psychology, which, in stories like this, is all too fragile.

Back to Schumer, who begins the skit by claiming ignorance of her pending baby’s gender. She hopes it’s a girl, “but really, just because it’s such a scary time for men.” (Laughter.) She reminds the crowd, “I don’t know if men know how scared we are as women all of the time.” (No laughter.) She informs everyone that many women run home, “not for the cardio.” (Laughter, less comfortable.)

Schumer then mentions a study that claims what women fear most is violence while men most fear ridicule.

“Oh, yeah, God. I’m so sorry. I didn’t know you guys were going through that. It must be so hard for you. Do you guys run home? Because someone’s telling a little jokey about you?”

This sentiment is not new. In a 1982 lecture at the University of Waterloo, the author Margaret Atwood came to the same conclusion, worth quoting at length:

“‘Why do men feel threatened by women?’ I asked a male friend of mine. (I love that wonderful rhetorical device, “a male friend of mine.” It’s often used by female journalists when they want to say something particularly bitchy but don’t want to be held responsible for it themselves. It also lets people know that you do have male friends, that you aren’t one of those fire-breathing mythical monsters, The Radical Feminists, who walk around with little pairs of scissors and kick men in the shins if they open doors for you. “A male friend of mine” also gives — let us admit it — a certain weight to the opinions expressed.)” 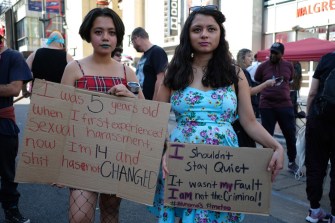 Activists participate in the 2018 #MeToo March on November 10, 2018 in Hollywood, California. (Photo by Sarah Morris/Getty Images)

Atwood states that men are generally bigger and stronger with access to more power and money. Yet this male friend says his peers most fear laughter, the audacity of a woman that would dare to undercut their world view. Her female students responded that they most fear being killed by a man. Not so subtle, this difference.

Speaking of students, Schumer points to grade school as a breeding ground for sexism. Six-year-old boys are told not to cry, to toughen up. They’re rewarded for meanness, as it implies that they like girls. The girls are told that boys knocking them down is a sign of affection, one that persists throughout their lives — and might explain, partly, why some women remain in abusive relationships.

If you think we’ve grown out of such mindsets as adults, think again. A few months ago Gillette became a target for ridiculed men when daring to claim that toxic masculinity is problematic. Earlier this week, Tucker Carlson commented that every man would be like Chris Hayes if feminists had absolute power. Even minor criticisms are branded as ridicule. As Schumer and Atwood (and millions of women) know, men are too incompetent to handle the slightest slight.

The familiar pretense — “It’s our biology!” — is a convenient avoidance technique. Our social and technological evolutions would be impossible without emotional maturity. Dunbar’s number was the law of all lands for most of time. Then we figured out how to communicate on a global scale. Sort of. To say we can’t be better men because of DNA is nonsense. It’s simply an excuse for not having the will power to become a kinder and more thoughtful human being.

What women most fear — violence — is more than the result of bad habits. They face a perpetual existential dilemma. For men, the dilemma is “saving face,” resulting in (surprise!) aggression and violence when questioned. Until men are mature enough to face that fact, this imbalance will remain. Imagination is destiny, but sometimes, so is laziness.

Tags
gendergender equalitysexual violencetrustviolencevulnerability
In this article
gendergender equalitysexual violencetrustviolencevulnerability
Related
The Big Think Interview
The renegade WW2 pilots who tried to end war as we know it
The Bomber Mafia nearly changed the world—and you’ve likely never heard of them.
▸
10 min
—
with
Malcolm Gladwell
The Present
Autonomous killer robots may have already killed on the battlefield
A brief passage from a recent UN report describes what could be the first-known case of an autonomous weapon, powered by artificial intelligence, killing in the battlefield.
Neuropsych
The science of sex, love, attraction, and obsession
The symbol for love is the heart, but the brain may be more accurate.
▸
14 min
—
with
Big Think
The Present
Who’s listening? Inside the voice-profiling revolution
Do you sound friendly? Hostile? And which voice would be more likely to buy something?
Neuropsych
Psychopath-ish: How “healthy” brains can look and function like those of psychopaths
A recent study used fMRI to compare the brains of psychopathic criminals with a group of 100 well-functioning individuals, finding striking similarities.
Up Next
Strange Maps
How Brexit has changed the mental map of Britain
Artistic and statistic cartography projects show the U.K. divided like never before.