If you happen to be walking down a quiet sidewalk in Irvine, California, don’t be too surprised to encounter a little blue robot with “Prime” — as in “Amazon Prime” — printed on its side. It’s an Amazon Scout robot.

There are currently a “small number” of the all-electric, six-wheeled beasties rolling around town. They’re accompanied for now by human Amazon Scout Ambassadors keeping an eye on the bots and answering customers’ inevitable questions.

These “adora-bots,” Amazon’s term, are the online retailer’s first foray into real-world deployment of a robotic delivery system. Depending on how effective they are — and how Amazon customers perceive them — these little autonomous droids could represent the leading edge of nationwide robotic delivery. At least in places with sidewalks.

Not their first rodeo

Does the Scout beep when it arrives at its destination? Does it bleep or bloop?

Amazon Scouts were developed in the company’s Seattle labs, and first tested near Amazon’s headquarters beginning in January 2019. Six of them have been delivering packages in Washington’s Snohomish County in daylight hours and all sorts of weather. Being similar in size to largish rolling ice-chests, they’re capable of delivering any package fits.

Amazon reports that the Scouts have been making friends along the way — they cite “Winter the cat and the excitable Irish terrier Mickey” in Washington. While the robots need to be able to cross streets and avoid moving vehicles, safely getting around on sidewalks represents an even more difficult technological challenge. Though streets are fairly ordered spaces with lanes and rules, any given sidewalk can be the Wild West, with unpredictable humans — including fast-moving children — and animals, as well as random obstacles such as garbage cans and recycling bins, moving skateboards, and so on. So far, there haven’t been any major problems, which is impressive. 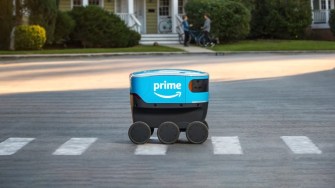 A Scout comes to call

For Irvine’s test program, Amazon is handing out delivery assignments on a random basis, regardless of the delivery option a customer selects at purchase. A big question Amazon’s trying to answer is how well the public will respond to Scouts. Right now, encountering a Scout at the end of one’s door must seem odd — in Amazon’s video, even the actor seems a little unsure about whether she should say “thank you” or something else as she retrieves her package.

It’s likely that we’ll get used to seeing automated delivery vehicles rolling and buzzing around in time, and that’s part of what Amazon is keeping their human eyes on.

No matter how streamlined the process of shuttling a package from one city to another has become, there’s still the bottleneck at the end of the trip: A driver exiting their truck on foot and manually carrying a package to a door, and then walking back to the truck. In an industry where every second and penny counts, this last-mile segment has been a source of industry frustration.

Delivery bots that run continuously in their routes — continuously shuttling goods without lapses — could provide the solution, assuming the technology is reliable, cost-effective, and customers grow accustomed to dealing with droids. The popularity of automated assistants such as Alexa, Siri, and Cortana suggests consumers are moving in that direction. As far as the economic equation goes, these are early days, with lots of research and development costs to be absorbed as the technological and human interaction bugs are sorted out.

Bend it. Stretch it. Use it to conduct electricity.
The Well

Lisa Brennan-Jobs on growing up without, with, and in spite of her dad

How do you write away the personal hole in your heart when that hole was left by a man half the world idolizes? Steve Jobs’ daughter, the writer Lisa Brennan-Jobs, on the process and effects of writing her beautiful memoir SMALL FRY.