If you are wondering about how the city of a near future might look like, imagining giant airships roaming the skies might soon be a pretty safe bet. A patent for Amazon’s flying warehouses revealed some quite futuristic but also very possible technological solutions that the online retail leader is looking to implement.

The patent, found by by Zoe Leavitt of CB Insights, describes “airborne fulfillment centres” (AFC) that will float above cities, at 45,000 ft, carrying goods to be delivered by an army of drones.

Some aspects of why the airships could be useful to Amazon – it would build fewer physical warehouses and the delivery by drones from an AFC would require very little power, as the drones would essentially be gliding down to their destination. Here’s how the patent describes the workings of the flying warehouses:

“As the UAVs descend, they can navigate horizontally toward a user-specified delivery location using little to no power, other than to stabilise the UAV and/or guide the direction of descent. Shuttles (smaller airships) may be used to replenish the AFC with inventory, UAVs, supplies, fuel, etc. Likewise, the shuttles may be utilised to transport workers to and from the AFC.”

The Daily Mail made a helpful graphic to show the process envisioned by Amazon: 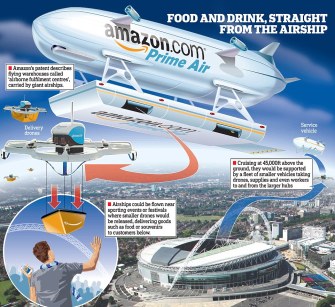 Another interesting aspect – the airships could be used as giant advertising boards, with customers being able to order what they see displayed.

How would the airships be used? There are many applications. One way would be to fly them over events like football games to deliver snacks and merchandise to the spectators. Imagine a fleet of drones hovering over the stadium during breaks.

“‘Perishable items or even prepared meals can be delivered in a timely fashion to a user,’ says the patent. 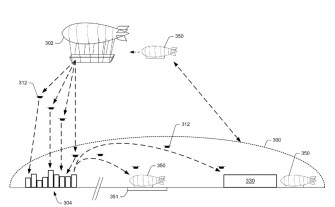 Illustration from the patent.

How far are we from this being a reality? We might be one or two years away, if you judge by Amazon’s previous predictions. Amazon made its first successful drone delivery at the end of 2016. Here’s how that looked:

If you want to know more details about how the AFCs would work, you can read the patent here.

Dr. Sara Walker is an astrobiologist and theoretical physicist, who is questioning the very nature of life and how we’re attempting to find it elsewhere.
▸
6 min
—
with
Sara Walker
Up Next
Personal Growth

The Opioid Epidemic Is Getting Worse. But What To Do About It?

100 million American suffer from chronic pain. Many need to look beyond opioids to manage it.