Amazon, Berkshire Hathaway, and JPMorgan Chase announced on Tuesday plans to create an independent company that would provide innovative healthcare services to their U.S. employees.

“The ballooning costs of healthcare act as a hungry tapeworm on the American economy,” said Berkshire Hathaway Chairman and CEO, Warren Buffett, in a joint press release. “Our group does not come to this problem with answers. But we also do not accept it as inevitable. Rather, we share the belief that putting our collective resources behind the country’s best talent can, in time, check the rise in health costs while concurrently enhancing patient satisfaction and outcomes.”

The proposed company would be “free from profit-making incentives and constraints,” and plans to focus first on developing technology that would provide “simplified, high-quality and transparent healthcare at a reasonable cost.”

That “reasonable cost” line will likely resonate with Americans. The U.S. spends about twice as much per-capita on healthcare as other developed countries. In 2016, healthcare spending accounted for about 18 percent of the U.S. GDP. That’s more than double the share it held in 1980. 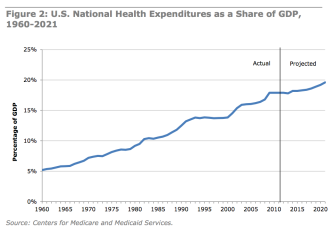 Rising healthcare costs can be attributed, in part, to inefficiencies in the system: requiring patients to see a doctor to get prescriptions filled, time-consuming administrative tasks, and a lack of serious price competition between hospitals. This new venture could begin to change that.

“This is the start of a restructuring of the healthcare industry. This could be the catalyst for something bigger,” said Chuck Self, chief investment officer with iSectors, to CNN. “It’s part of the Amazon-ization of the nation, but it’s now clearly more than just Amazon.”

The markets seem to agree. Stocks of major healthcare companies took a big hit on the morning of the announcement, including a more than 4-percent dip by CVS and Walgreens.

It’s yet unclear when or how the new company will go about providing services to employees, or whether it will be able to compete seriously with the larger, more established providers who have the major advantage of scale. Still, the industry will surely keep close tabs on the new venture of the three behemoth companies, all of whom have a track record bringing innovation to their respective sectors.

“The three of our companies have extraordinary resources, and our goal is to create solutions that benefit our U.S. employees, their families and, potentially, all Americans,” said Jamie Dimon, Chairman and CEO of JPMorgan Chase.

Tags
Amazonberkshire hathawayhealth carehealthcareinnovationjeff bezoswarren buffet
In this article
Amazonberkshire hathawayhealth carehealthcareinnovationjeff bezoswarren buffet
Related
The Present
How heat pumps of the 1800s are becoming the technology of the future
Innovative thinking has done away with problems that long dogged the electric devices — and both scientists and environmentalists are excited about the possibilities.
The Present
How California could save its rain instead of letting it drain into the ocean
Why can’t more rainwater be collected for the long, dry spring and summer when it’s needed?
Hard Science
Scientists use laser beam to divert lightning strikes
Laser-guided lightning systems could someday offer much greater protection than lightning rods.
The Future
Paper-thin solar cell can turn any surface into a power source
Some solar cells are so lightweight they can sit on a soap bubble.
The Past
How electricity stormed past steam and became the power of the future
The shift from steam to electricity was inevitable — but some foresaw it earlier than others.
Up Next
Technology & Innovation
For the first time ever, Facebook has revealed its privacy guidelines
New privacy tools and transparency are all part of continuing changes to the largest social network in the world.